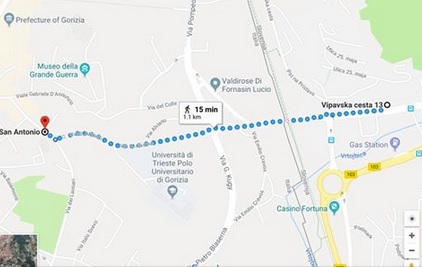 Note: Presence Counts is not organizing any of  these events, we are publishing this text for people across the US and Europe to be able to see what is going on and for documentation only.

Gorizia is by its nature a crossing point in the centre of a common territory, which was always, and is nowadays more than ever, transnational, multilingual and multicultural. It is not a coincidence that diverse nations in this city stood together to stop the rise of Nazi after the fall of the Fascism in September 1943. For the same reasons, Gorizia is also under constant pressure of nationalisms, of racism and fascism. A hundred years ago in its surrounding area there used to be the most bloody battles of the First World War, which left hatred and false divisions behind.

In the past weeks this contrast was evident as never before: we could witness the civil war of institutions against the migrants who found shelter in the Bombi gallery – the gallery that years ago used to be a shelter for people during Second World War bombardments. This gallery is a symbol and a proof of the past and actual Fascism. A proof that can be summed up in one word: INHUMANITY.

IT IS INHUMAN:
neglecting the hygienic minimum and even water to whom has no place to go to,
forcing hundreds of people to sleep in makeshift shelters;
in the depths of winter preventing an access to a few shelters, which protect from rain and snow;
transforming the person who comes from somewhere else into an object of miserable political campaigns, stirring up xenophobia and intolerance.

This inhumanity has already many faces and too many responsibilities. On the one hand, we can notice an obvious inhumanity, claimed by the mayors of Gorizia and Pordenone and their councils – among the members of the councils there are persons who have no problem sharing the table with whom openly praises Fascism. On the other hand it is also true that the tragic situation of the migrants in Italy, Europe and African countries facing the Mediterranean, is a result of precise choices.

IT IS INHUMAN:
externalizing the control of migration flows and national borders as the European Union does;
the Italian Government’s deals with Libyan criminal militia, that practices slavery;
the exploitation of migrants and the idea that someone can migrate only if he/she sacrifices his/her personal freedom and life itself;
the criminalization of those who offer first aid to migrants, on the sea and land;
the Dublin agreement and the pervert bureaucratic mechanisms asylum seekers are bound to;
the false welcome actions, based on the principles of security, and the permission to application of them to private institutions that follow profits, or to volunteers, that are taking the risk of becoming instrument of control and blackmail;
the use of administrative detention and imprisonment for those who don’t have personal identification documents;
the exploitation and the denial of migrant labor rights as a feature of European labor policies;
the economic exploitation by the European Union countries of the territories from which the migrants come;
the military interventions and sale of weapons by the European Union countries, which perpetuate a state of permanent war in the countries from which migrants are forced to escape.

From Gorizia we can and we want to start renewing the idea of humanity, reconstruct the concepts of hospitality, mutualism, mutual recognition and universal equality.

FOR US IS HUMAN:
rejecting and fighting any kind of war between the poor, and the inhuman idea that the poorest and weakest are the ones to pay the cost of a crazy development system;
guaranteeing a suitable welcome, that is not only guaranteeing secure and easily accessible places, but also places integrated with the territory, which allow real mutual awareness and the approach of autonomy, identity and individual integrity of everyone;
opposing ourselves to the opening of detention centres and fighting for the closure of the existing ones;
unveiling that there is no “immigration emergency”, and that migrations are a structural phenomenon of human history, very extended in an irreversibly globalised world;
understanding that this phenomenon can only be tackled by involving and including migrants in the decisions and routes that are related to them;
learning to change through mutual recognition, all of us, HUMAN BEINGS, BORN EQUAL ON THE ONE AND UNIQUE PLANET.

To reaffirm these principles of universal humanity, in Gorizia we are starting a common transnational fight with common mobilization, which starts on the border crossing Casa Rossa/Rožna dolina, on Saturday, 16 December at 15 h.

This post was originally published on Presence Counts · 15o · OccupyLjubljana.