Bujanovac, April 24, 2019 - As part of the integration activities, APC partners with a large number of schools and local organizations throughout the country. With thee schools and organizations, we organize joint classes, socializing socialize with young people, and raise issues of solidarity, and the responsibility of local communities in accepting refugees. 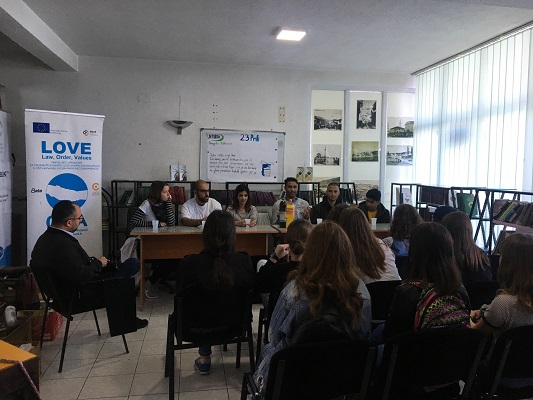 APC and the cultural association "Dituria" from Bujanovac organized a meeting of young refugees and local volunteers on April 24 in a reception center in Bujanovac. Young people from Bujanovac had the opportunity to hear interesting stories and experiences from the refugees with whom APC has been working since their arrival in Serbia.

The gathering was very emotional. At the beginning, volunteers listened to the shocking stories of Ahmed from Afghanistan and Parvez from Pakistan.

They talked about a warm home, but also their childhood and growing up in fear that someone would knock on the door in the middle of the night and forcibly kidnap their loved. Because of these realities, Ahmed and Parvez decided to leave their home countries in hope for better lives. All the horrors that accompanied them on the road from Asia did not discourage them; on the contrary, all of the barbarian and scarring acts of police squads from the borders of Turkey and Bulgaria fortified their conviction to press on. Ahed and Parvez are grateful to the citizens of Bujanovac, who may not be the most well off but understand human compassion and are willing to help those who are less fortunate.

The story of a young married couple from Iran, Hamid and Mali, will forever be remembered by those who attended the workshop in Dituria. At the beginning, Hamid and Mali talked about of their culture and customs. They were expecting a typical life. They wanted a family and to be able to provide for them; Mali even finished her degree in design.

However, Mali was not allowed to realize her dreams. She was forced to choose between a dream job and a dream husband whose religion wasn't tolerated in Iran. She chose love. As a result of this decision, she had to leave Iran.

As Mali spoke about the future she wished to create for herself and her family, tears appeared in the eyes of the "Dituria" volunteer.

When Maliha finished with her story, the room was quiet. Everyone was retelling her story over and over again in their heads. No one could picture the hardship and adversity that she had described. It is moments like these that make the jobs of APC/CZA employees worth it. We get to see what the journeys of people like Mali and Hamid are like. We get to humanize these migrants, and, most importantly, we get to help them in whatever way possible.

Refugees said that they are glad when they have the opportunity to tell someone not only their "story from the road", but also to introduce young people to the country they come from and the lives of people in it.

On the other hand, volunteers from Bujanovac emphasized the importance of such encounters with migrants. They say that that such encounters are opportunities to see what the lives of people on the roads are like. Moving forward, it is a common goal of APC/CZA and Dituria to organize a new path through which the refugee crisis can be highlighted from many different angles, and not just the stories with which we are most familiar.

If our goal is to create a more tolerant society and develop empathy towards refugees, the means through which we accomplish these goals must be working with the public and local organizations, facilitating dialogue between refugees and Serbian citizens, and work on developing a new Serbia that works for everyone that calls this place home.