Subotica, Horgoš, Kelebija, Kikinda, July 20, 2019. – APC/CZA staff regularly visit border areas in northern Serbia, migrant and refugee reception camps and open locations where migrants and refugees are located along the borders with Croatia, Hungary, Romania and BiH. APC / CZA mobile teams talk with refugees, provide them with legal information and psychosocial assistance. Through conversations with refugees, APC / CZA mobile teams gathered information about the migrant and refugee situation at the mentioned borders, about the main problems, crossing borders attempts, violence, inhumane and illegal treatment and violation of the rights of refugees and migrants, as well as illegal push-backs conducted by the police along the northwestern borders of Serbia.

The APC/CZA collects information on the situation in camps, the living conditions of migrants and refugees and their treatment by camp administrations, representatives of institutions and citizens, respect for the rights of asylum seekers and migrants, problems, potential discrimination, violence, trafficking, smuggling and other challenges of asylum and migration in local communities. 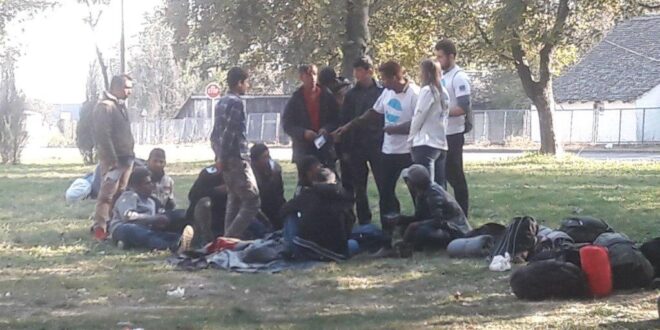 APC/CZA lawyer and psychologist help refugees to report violence, corruption, discrimination, smuggling, crimes, labor and other exploitation, trafficking, assist them to express their asylum intention and to apply for asylum if they seek refuge in Serbia. In addition, the APC/CZA psychosocial team provides psychological assistance and empowers migrants and refugees, helping them to cope with stress and other consequences of violence, injuries, inhumane behavior and illegal push backs, helping them to obtain health care and get a caregiver if they are unaccompanied minor. The APC/CZA teams help them to get social protection and assistance from local centers for social work and the APC/CZA team also empower migrants and refugees to overcome existing challenges and threats and reduce their own vulnerability.

Through work on the field, talks with migrants and refugees and insight into the local situation, from July 08 to July 19, 2019, APC/CZA mobile team identified current problems, challenges and practices in the north of Serbia and along north- western borders of Serbia.

APC/CZA staff members visited the camp in Kikinda on July 11 and talked with J.S. (30, Bangladesh) who was in the group of 55 migrants who were pushed-back by Croatian police during the first week of July. He said that during the first week of July, a group of 55 migrants from Bangladesh, Pakistan and Afghanistan had organized a crossing into the Croatian territory near Sid and entered the Croatian territory about 50 km away. Croatian police then spotted them and stopped them. They ordered everyone to sit on the ground and then they photographed all the migrants present there. Police officers seized all the phones and smashed them. They searched the migrants and confiscated their money. Half of the migrants caught were forced to sign a document they did not understand because there was no translator present. There was no communication between police and migrants. None of the migrants present were allowed to speak for fear of physical punishment. Each of the 55 migrants in the group received hits in the the head and body and the police also kicked them. No one sustained serious injuries during the beating. After the beating, the migrants were put into several police vehicles and police drove them to the border with Serbia near Sid and ejected them in the cross-border area. From there, migrants crossed to the territory of Serbia on foot. They returned to Kikinda by taxi and bus. During this push back, migrants did not see the Serbian police.

S.A. (26, Bangladesh) has been in Serbia for a month and during this time he tried to illegally cross Croatian territory only once, at the end of June. While attempting to cross, Croatian police caught him near the Sid border crossing, took his phone and he received a hit in the head. He was not allowed to express asylum intent at this encounter with police, nor was there any communication between S.A. and the police. Police pushed him back not far to the Sid border crossing, where he crossed into Serbian territory on foot and returned to Kikinda by bus. There were no Serbian police present during this push-back.

S.A. (19) from Pakistan, who is staying in Sid, said that he had tried to cross the Croatian border 5 times at various locations. He has been in Serbia for 3 months and was met by APC / CZA officials at a camp in Sid. About a month ago he tried to cross near Apatin, across the river, in a boat. There were 15 of migrants in the boat. After crossing, they walked for 15 hours, when they were caught by Croatian police. Police officers recorded their personal information and took pictures of them, after which they were pushed-back to Sid. There was no violence, he says. He also added that there are frequent attempts to cross to Croatia near Bački Breg over the small river.

S.A. (23, Pakistan) has been in Serbia for 12 months and was met by APC / CZA officials on 11 July in Kikinda. He described his illegal border crossing when he managed to reach Slovenia. It happened 12 months ago, in July 2018. He said that a group of 23 migrants from Pakistan went to BiH, hand moved to Croatia from there, then from Croatia to Slovenia, when they were spotted by Slovenian police officers. He said that during the arrest by the Slovenian police, they spent 5 days in jail. After stating that they wanted asylum, they were not allowed to contact an asylum procedure lawyer, but after 5 days they were transferred to Croatia and taken over by the Croatian police. A group of 12 unaccompanied minors who were with them at the time remained in a closed camp in Croatia, and they began the asylum procedure, he said. The other 11 adult men were then pushed back by Croatian police officers at Velika Kladusa in BiH. Bosnian police were not spotted on this occasion.