Bujanovac, August 27, 2019 – Southern team of the Asylum Protection Centre, consisting of lawyers, psychologists, and cultural mediators visited a camp in Bujanovac and spoke with eight unaccompanied minors who are there between two and ten days. The minors were not registered with the police, and the administration of the camp in Bujanovac admitted them to the camp without a document indicating their intention to seek asylum.

While talking to APC / CZA officials, only two boys said that they had declared themselves underage during their registration at the camp, and the others had stated older age, so they won't be separated from the group. People staying at the reception centre in Bujanovac stated that they hear about the camp mostly from friends and acquaintances who were previously accommodated there, so they are informed that the camp has recently become a camp for adult single men, forcing these boys to register as adults. They said that they did not want to separate from the group they came to Serbia with, although they do not have any relatives or close friends among the group they are traveling with, mostly acquaintances they met along the way. 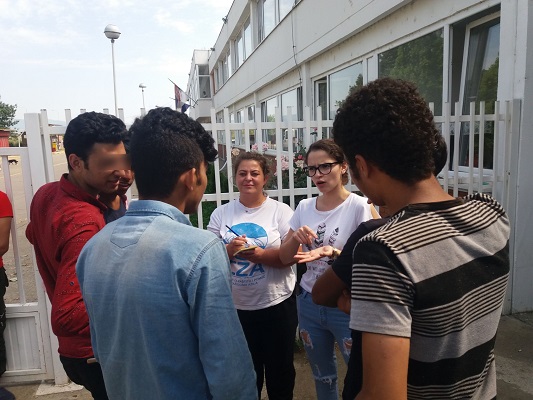 Also, underage boys also said that APC/CZA staff members were the first to explain to them their rights and obligations as minors.

Asylum Protection Centre informed the Centre for social welfare in Bujanovac, who responded to our team at the request for setting up a guardian for minors that there are four field social workers in the camp and that they are aware that unaccompanied minors are in the camp, and that they will check with the administration of the camp in Bujanovac for information on other refugees who told APC / CZA officials that they were minors.