Athens, September 19 – France and Italy are calling for a new system to automatically redistribute migrants across the EU as the number of people entering Europe surges.

The current system, he added, was particularly unfair on Italy.

Hundreds of migrants arrived in Italy and Greece this week, many travelling by boat from Libya and Turkey.

On Tuesday, 791 migrants arrived in Greece. The sharp rise in recent days has led to issues at centres on Greek islands that receive and house individuals during the assessment process.

On Lesbos, a centre built to cater for up to 3,000 people is currently housing more than 10,000. Other Greek islands, including Kos and Samos, are also struggling with over-capacity, the latest government figures show. 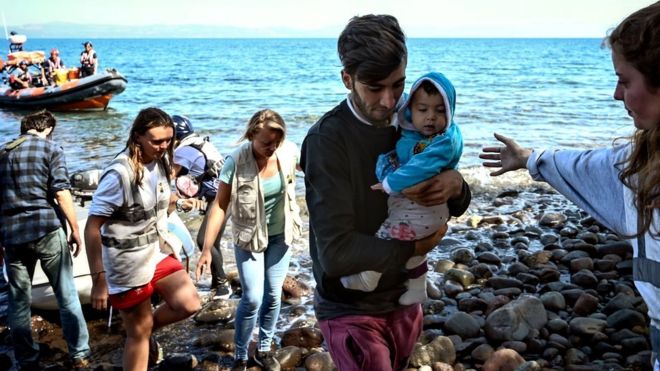 On Wednesday, Mr Macron and Italian Prime Minister Giuseppe Conte held talks in Rome. The leaders later said that the EU needed to introduce a fairer system of taking in migrants saved from the Mediterranean Sea.

"France is ready" to help develop the framework to overhaul the current system, Mr Macron said.

Italy, which has been at the forefront of the migrant influx in the EU, has previously criticised other member states for not sharing enough of the responsibly.

The rescue ships would then been forced to wait while EU countries negotiated resettlement agreements.

Italy's new coalition government, which took office last week, signalled a change of approach to migration after permitting 82 migrants to disembark on the southern Italian island of Lampedusa over the weekend.

Thousands of migrants attempt to cross the Mediterranean to Europe every year. Those who make the journey often travel in poorly maintained and overcrowded vessels, and many have died en route.

Earlier this week Turkey, which is hosting more than 3.6 million Syrians who have fled the country's civil war, warned it would "be forced to open the gates" if it did not receive "logistical support" to establish a refugee "safe zone" in Syria.

President Recep Tayyip Erdogan said that up to three million Syrian refugees could return to their country to live in the north, but that international co-operation was needed for that goal to be met.

Tens of thousands of Syrians have already fled north from Idlib, a province held by rebel and jihadist forces, to the Turkish border.

Under a 2016 agreement with the EU, Turkey imposed stronger controls to curb the flow of migrants and refugees to Europe.