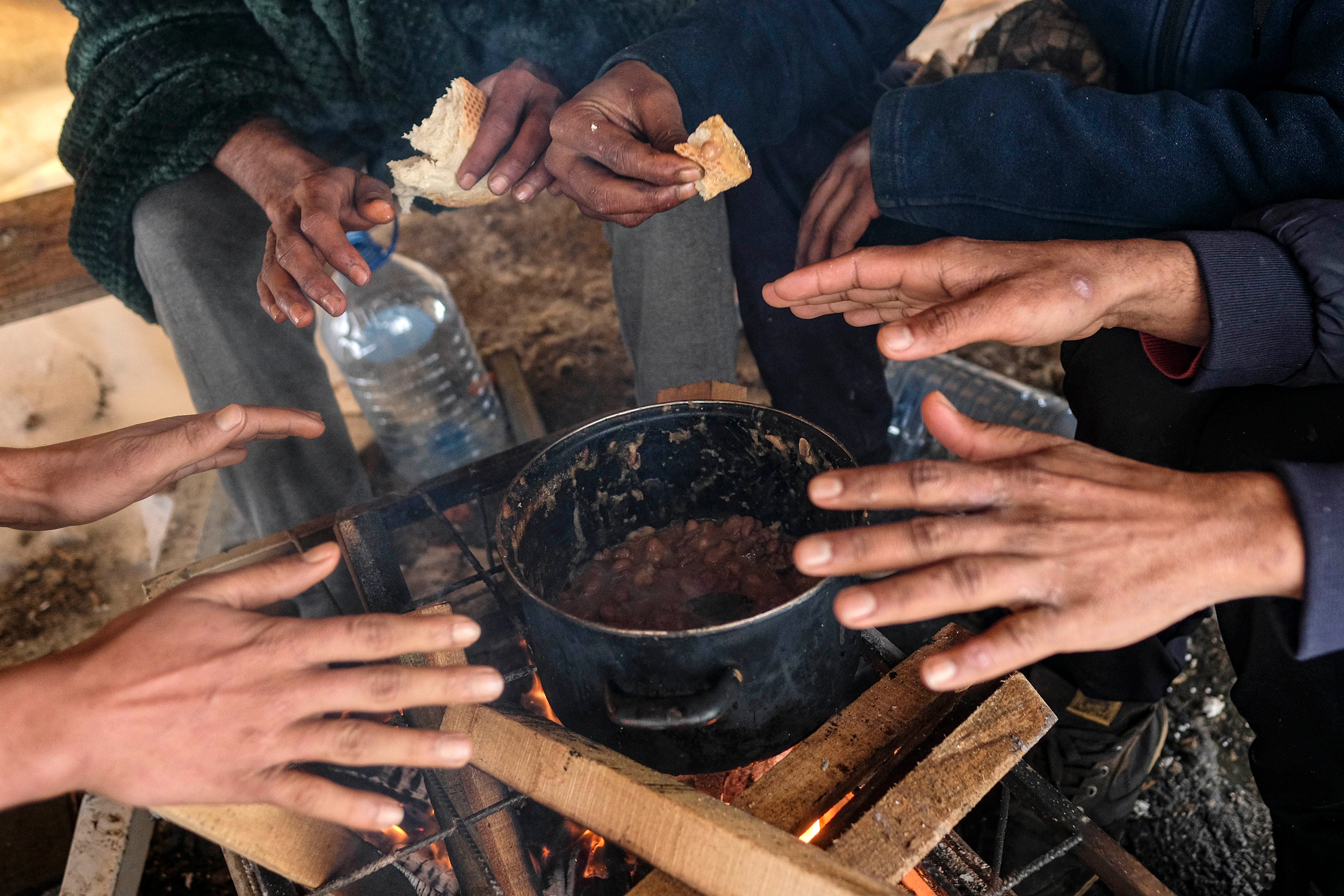 (Brussels) – Bosnian authorities should immediately provide adequate, winterized accommodation for migrants and asylum seekers stranded in freezing temperatures in the northwestern part of the country, Human Rights Watch said today. After a fire destroyed the temporary emergency camp in northwest Bosnia on December 23, 2020, hundreds are housed in tents that do not meet basic humane housing conditions.

“Hundreds of migrants and asylum seekers in northwest Bosnia are spending the winter in dire conditions because the authorities have repeatedly failed to address their basic needs,” said Lydia Gall, senior Europe researcher at Human Rights Watch. “Local, federal, and national authorities in Bosnia and Herzegovina should immediately take concerted urgent action to ensure that the migrants have access to winterized housing and the medical and other assistance they need.”

Conditions in the Lipa temporary emergency camp were poor before the fire, with a lack of basic services including critical hygiene and sanitation services such as sewage and running water. The camp had been operating since April 2020, when it was set up as part of the government’s response to the Covid-19 pandemic.

The International Organization for Migration (IOM), which ran the camp with EU funds, warned the authorities several times that the camp was unfit for winter conditions. It had said the camp should be made suitable for winter – a process that would involve installing adequate heating, flooring, and insulation – and that the authorities should provide alternative accommodation while that work was being carried out.

Ignoring that advice, the Bosnian Council of Ministers, the executive authority of the Bosnian federal government, had agreed on December 21 to convert Lipa to an official reception center for asylum seekers and migrants. IOM decided to shut the camp down on December 23. On the same day, fire destroyed the camp, leaving an estimated 1,200 people stranded outdoors.

Many of the migrants in the area are seeking to enter Croatia to seek protection or a better life in the European Union. Croatia has responded with violent police pushbacks that breach EU, human rights, and refugee law and exacerbate the degrading conditions for migrants.

The failure by Bosnian authorities to ensure humane treatment for migrants and asylum seekers in northwest Bosnia is a persistent issue. In 2019, the Bosnian authorities faced criticism for housing migrants and refugees in inhumane conditions at the Vucjak camp near Bihac and close to the Croatian border. The camp was dismantled in December 2019 following international pressure, but the authorities have failed to put in place alternative long-term solutions.

Nicola Bay, Danish Refugee Council director in Bosnia and Herzegovina, told Human Rights Watch that within days following the December 23 fire, about 350 people who were able to pay the bus fare were transported to a camp in Sarajevo at their own expense, while the remaining 850 people were stranded at the destroyed camp site or forced to seek shelter in the nearby forest.

Bosnian authorities have done little to address the unfolding humanitarian emergency. Two weeks after the fire, authorities set up 30 tents near the former camp site, each with the capacity for about 30 people. Some tents are not suitable for winter conditions, the Danish Refugee Council said. Some generator-powered air cannons used to heat the tents have failed during the night, leaving people to roam the camp looking for the warmest tent. The site is now being managed by the Bosnian Service for Foreigners’ Affairs, a unit within the Federal Security Ministry.

The crowded conditions and inability to distance and isolate people is of growing concern due to the risk of coronavirus spread. Bay, of the Danish Refugee Council, said that providing medical treatment remains a challenge. With no running water on the site, basic hygiene practices and preventing and treating conditions that are common in cramped settings, like scabies, are impossible. The International Organization for Migration had for months criticized the failure to connect the former camp to the water and sewage system.

In December, Bosnian state authorities attempted to relocate about 50 former Lipa camp residents to the empty Bira camp in nearby Bihac, which offers more suitable reception conditions. Bira had been closed in September due to pressure from local residents. The town and both camps are in Una Sana Canton. This relocation effort failed due to local resistance fueled by municipal authorities in the aftermath of local elections in November marred by significant anti-migrant rhetoric.

International officials have previously urged the authorities to reopen Bira. They included the EU special representative to Bosnia and Herzegovina, Johann Sattler; the EU commissioner for home affairs, Ylva Johansson; and the EU high representative for foreign affairs, Josep Borrell as well as human rights groups.

Bay told Human Rights Watch that in addition to the 850 asylum seekers and migrants who remain at the Lipa site, another 900 migrants and asylum seekers, including families with a total of 31 children, are elsewhere in the Una Santa canton, with no access to housing or basic services. They have been forced to sleep in the open or squat in abandoned buildings.

Failure by Bosnian authorities at all levels to cooperate on migration management and humanitarian assistance has contributed to the current crisis. While most migrants and asylum seekers in Bosnia are stranded in the Una Sana Canton, the authorities in Republika Srpska and other parts of the Federation have refused to allow relocation, even though that could help alleviate local tension or to share responsibility for humanely hosting migrants and asylum seekers.

Reopening the Bira camp, even if only temporarily, currently appears the most viable option to ensure that migrants and asylum seekers previously in Lipa can be housed during the winter months in winterized buildings with heating, electricity, toilets, and showers, Human Rights Watch said.

EU institutions should call on Bosnian authorities on state, entity, cantonal, and local levels to immediately ramp up cooperation to adequately address the ongoing humanitarian crisis and ensure that the €28,5 million of EU funding allocated to Bosnia and Herzegovina in December 2020 and January 2021 for managing migration and providing humanitarian assistance serves its purpose, Human Rights Watch said. Since early 2018, the EU has provided €88 million to Bosnia and Herzegovina for migration management, including €13.8 million for humanitarian assistance.

The European Commission should also seek meaningful long-term solutions to the situation faced by migrants and asylum seekers in Bosnia and Herzegovina, instead of allocating largely short-term and emergency funding, and tie its support to the Bosnian authorities to clear progress in terms of suitable reception conditions and fair and effective access to asylum. The Commission should also hold the Croatian government to account and trigger legal action against Zagreb for the continued patterns of violent pushbacks at its border with Bosnia and Herzegovina.

“As the main donor to Bosnia’s migration management, the EU has a responsibility to ensure that its support helps those most in need,” Gall said. “In addition to funds, the EU Commission should engage actively with Bosnian authorities to develop a functioning asylum system and ensure that migrants and asylum seekers are treated humanely and with dignity.”