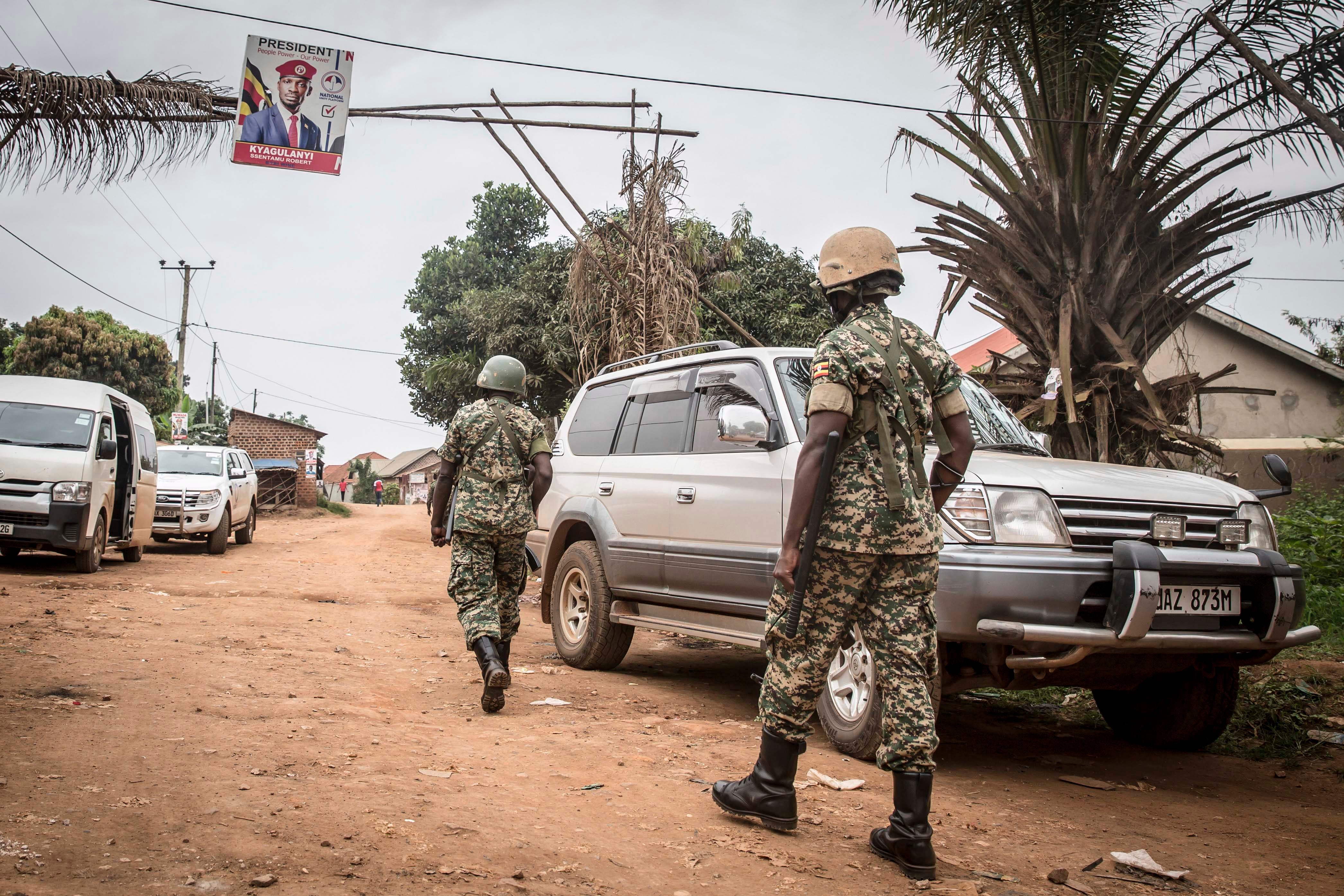 (Nairobi) – The weeks leading up to Uganda’s recently concluded elections were characterized by widespread violence and human rights abuses, Human Rights Watch said today. The abuses included killings by security forces, arrests and beatings of opposition supporters and journalists, disruption of opposition rallies, and a shutdown of the internet. The authorities should ensure thorough investigation and prosecution of those responsible for abuses.

Since election campaigns began in November 2020, security forces have clamped down on opposition members and journalists, violently arresting scores of people, including the presidential candidates Patrick Amuriat of the Forum for Democratic Change and Robert Kyagulanyi, of the National Unity Platform. On November 18 and 19, security forces clamped down on protesters demanding the release of then detained Kyagulanyi, popularly known as Bobi Wine, resulting in at least 54 deaths.

“A democratic playing field for free and fair elections was worryingly absent during these elections,” said Oryem Nyeko, Africa researcher at Human Rights Watch. “Instead of restricting free expression, movement, and assembly, the Ugandan government should take concrete steps to improve respect for human rights for all and remove all remaining restrictions.”

Two days before the January 14, 2021 elections, the Uganda Communications Commission ordered internet service providers to block access to social media. The next day, the government shut down internet access across the country for five days. Access to social media sites including Twitter and YouTube remains restricted.

On January 16, the Electoral Commission declared President Yoweri Museveni, 76, the winner for his sixth term as president. The day after the election, security officials surrounded the home of Kyagulanyi, his closest rival, and have since prevented anyone from going in or out. On January 18, security forces blocked access to his party’s head office in Kampala, allegedly to “counter any plans to violent demonstrations and mass riots.”

Security forces have turned away people attempting to visit Kyagulanyi, including the United States Ambassador to Uganda, Natalie E. Brown. Media reported that soldiers beat Francis Zaake, an opposition member of parliament, when he attempted to visit.

During the campaigns, police fired teargas - and, in some cases, local media reported, live bullets - to disperse crowds during opposition rallies, citing government Covid-19 regulations restricting public gatherings. On November 9, police fired teargas to disperse supporters as Amuriat traveled through Mbale to begin his campaign, and later in various other parts of Uganda such as Kitgum, Gulu, Rukungiri, Kiryandongo, Masindi, Kayunga, and Masaka. Since November 3, police have arrested Amuriat at least five times. On January 6, a policeman reportedly shot at Amuriat’s convoy, shattering the windows of one of his escort cars in Kitagwenda, Western Uganda.

Police fired teargas during several of Kyagulanyi’s rallies, including in Lira, Mayuge, and in Kasese on November 24, where up to six people were reported injured after police fired live bullets. Security forces briefly detained Kyagulanyi and arrested scores of his supporters during a rally on an island in Kalangala on December 30.

On November 18, in Luuka, Eastern Uganda, the police arrested and detained Kyagulanyi for allegedly breaching Covid-19 regulations by mobilizing a large crowd. He was charged with "doing an act likely to spread infection of disease" and was released on bail two days later. Police responded to crowds of people protesting Kyanguanyi’s detention with teargas, beatings and live bullets, leading to at least 54 deaths. Security Minister Elly Tumwine, who warned against any further protests, told the public that the police have the right “to shoot you and kill you.” On November 29, Museveni promised to investigate the killings and to compensate some of the victims.

On January 8, police charged 49 of the National Unity Platform supporters arrested in Kalangala in December at a military court for allegedly being in possession of ammunition belonging to the Ugandan army.

The authorities restricted the media from covering opposition party members, and in some instances, beat and shot at journalists. On November 5, police shot Moses Bwayo in the face with a rubber bullet as he was filming Kyagulanyi arriving at his party’s office in Kampala. A journalist, who preferred to remain anonymous, told Human Rights Watch that on December 1 a policeman shot her in the leg with a rubber bullet while she covered a Kyagulanyi rally in Kayunga. On December 27, Ashraf Kasirye, a journalist with the National Unity Platform-owned Ghetto Media, was badly injured while covering a rally in Masaka, Central Uganda, after police fired at him. Francis Senteza, Kyagulanyi’s bodyguard, was killed later that day when a military truck allegedly ran him over. On January 8, the Inspector General of Police Martin Okoth Ochola told journalists during a news conference that, “we shall beat you for your own sake to help you understand that don’t go there.”

The authorities have similarly restricted the work of activists and civil society groups, including by blocking National Elections Watch Uganda, a coalition of local organizations, from monitoring the elections. On January 14, police arrested over 20 members of the Women’s Situation Group, an election monitoring group, for operating a “parallel tallying center.”

On December 22, police arrested a human rights lawyer, Nicholas Opiyo, alongside three other lawyers ­- Herbert Dakasi, Anthony Odur, and Esomu Obure - and Hamid Tenywa, a National Unity Platform official, at a restaurant in Kampala. The authorities later charged Opiyo with money laundering, alleging that he received $340,000 on behalf of Chapter Four Uganda, the organization he leads, knowing that the funds were “proceeds of crime.” Chapter Four Uganda says the funds were part of a routine grant to support its human rights work.

The Ugandan authorities should immediately end all forms of harassment and intimidation of journalists, opposition supporters, and leaders, including Robert Kyagulanyi, Human Rights Watch said. Instead, the authorities should protect rights, including freedom of movement, and ensure respect for the rule of law.

“The widespread violations of rights by government forces undermined the credibility of Uganda’s elections,” Nyeko said. “The authorities should take urgent steps to ensure the impartiality of security agents during elections and hold to account those involved in abuses.”