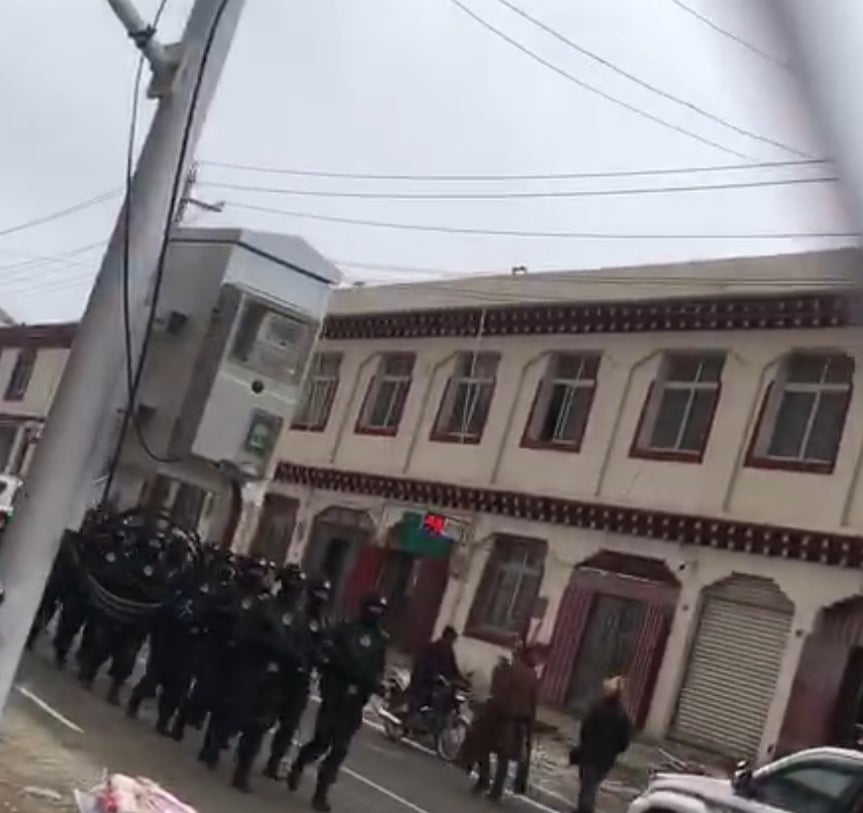 (New York) – Chinese authorities should account for the death of a 19-year-old Tibetan monk recently released from police custody, Human Rights Watch said today. The authorities also should release six other young Tibetans – including a 16-year-old boy – sentenced to up to five years in prison for involvement in the same peaceful protests.

“Chinese authorities have once again turned arbitrary detention into a death sentence,” said Sophie Richardson, China director at Human Rights Watch. “They should hold to account all those responsible for the brutal killing of the Tibetan monk Tenzin Nyima.”

The authorities released Tenzin Nyima in May 2020, but rearrested him on August 11, apparently for sharing news of the arrests online, including with contacts in India. In early October, prison authorities told his family to collect him from the prison due to his medical condition. Tibetans in exile with knowledge of the case said he was unable to speak or move and was suffering from serious injuries and an acute respiratory infection, which they believed was due to beatings, malnourishment, and mistreatment in custody.

On October 9, Tenzin Nyima was admitted to a hospital in the provincial capital, Chengdu, by which time he had lost consciousness. A hospital report that Human Rights Watch obtained indicates that he had been in critical condition for 10 days before being handed over to his family. Hospital treatment appears to have been delayed until his relatives raised the necessary funds (RMB 40,000, or US$6,200). After he spent several weeks in the hospital, doctors declared his injuries to be beyond treatment and discharged him.

On December 1, his family succeeded in having him admitted, still comatose, to a hospital in Kandze prefecture, Dartsedo (Ch: Kangding). Doctors at that hospital also discharged him on the grounds that his condition is terminal. Further evidence seen by Human Rights Watch indicated that he was paralyzed and gravely ill. He died soon after relatives brought him home.

Chinese police and prison authorities routinely torture and abuse inmates, and the situation is particularly severe in ethnic minority regions. The Chinese government should order a prompt and impartial investigation into the alleged torture of Tenzin Nyima and hold his abusers accountable, Human Rights Watch said. Authorities should provide his family with fair and adequate compensation, as required under the United Nations Convention against Torture, to which China is a party.

United Nations standards adopted by the General Assembly set out that all death-in-custody cases should be subjected to “prompt, impartial and effective investigations into the circumstances and causes” of the death. As the UN special rapporteur on extrajudicial, summary, or arbitrary executions has noted, since there is a presumption of state responsibility due to the custodial setting and the government’s obligation to ensure and respect the right to life, the government has to affirmatively provide evidence to rebut the presumption of state responsibility. Absent proof that it is not responsible, the government has an obligation to provide reparations to the family of the deceased.

Chinese government rules dealing with deaths in custody require the police to “immediately conduct” an investigation into the cause of death by viewing and preserving the surveillance video of the detention cell, and questioning fellow detainees, doctors, and guards, among other measures.

The need for independent investigation of the range of human rights violations by the Chinese government was underlined by a collective statement from UN human rights experts in June 2020. They expressed grave concern over China’s failures to respect human rights and abide by its international obligations, and recommended the establishment of an impartial and independent UN mechanism to monitor and report on abuses “in view of the urgency of the situations” in Hong Kong, Xinjiang, and Tibet.

The trials of Tenzin Nyima and six other Tibetans took place at the Intermediate People’s Court in Sershul on November 10 and 12. On December 14, four other monks from Wonpo monastery and two local youths, all between ages 16 and 23, were sentenced for involvement in one of two protests in Wonpo in November 2019 or for spreading news about the first incident. The sentences ranged from one to five years.

The court sentenced the Wonpo monks Choephel (also called Kunsel), 20, to four years; So-tra (also called Woezer), to three years; and Tsultrim, 16, to one year. All three were accused of distributing leaflets and shouting slogans on the night of November 7, 2019, and were charged with “incitement to split the country.” Tenzin Nyima was charged with the same offense, but the court did not announce his sentence, presumably because of his medical condition.

The longest sentence, five years, was imposed on Nyimay, a 22-year-old monk who had not taken part in the leafleting protests, but had posted news on social media about the detention of the four other monks. Nyimay had been detained on November 18, 2019, 11 days after the others, also on grounds of “incitement to split the country,” but local sources report that he was also accused of revealing state secrets for posting news of the earlier detentions.

The sentencing of Tsultrim, who was 15 or under at the time of the protest, is contrary to Chinese law, since children under age 16 are not deemed criminally responsible in China and cannot be tried for criminal offenses, except for certain violent crimes such as murder and arson (Chinese Criminal Code 1997, article 17). Under the Convention on the Rights of the Child, to which China is a party, the detention of children shall be used only as a measure of last resort and for the shortest appropriate period.

Two other young men from Wonpo, Nyimay’s elder brother Choegyal and his friend Yonten, were sentenced to four years in prison, also for “incitement to split the country,” after distributing leaflets and shouting slogans outside the local government offices in Wonpo on November 21, 2019. In court they testified to having also sent a video clip showing pro-independence leaflets and photos of the Dalai Lama to Choegyal’s uncle in Switzerland shortly before their protest.

Choegyal and Yonten had also posted statements on social media. Choegyal had written, “Loyalty to our people rests on each of our shoulders, and must never be abandoned.” Yonten wrote, “I heard of the misery suffered by those heroes who have given their lives for the sake of our people, the warriors who have struggled for our independence, and now I am terribly saddened that our brothers from Wonpo have been thrown in jail. May our brothers soon be released!”

Altogether, the authorities detained about 30 Wonpo residents, both monastic and lay people, following the protests on suspicion of involvement in the incidents or of showing support for protesters. Armed police were deployed in the town to patrol the streets and conduct military exercises, apparently intended to intimidate residents. Local officials also held two weeks of political education meetings at Wonpo monastery. By the end of December, all of those detained had been released except for the seven who were eventually brought to trial.

“Urgent, grim cases like the imprisonment of the young Tibetans have prompted UN experts to call for a mechanism to monitor and report on grave abuses by Chinese authorities,” Richardson said. “A failure to hold accountable those responsible for Tenzin Nyima’s death enables further appalling violations.”

For details about the situation in Wonpo and about the people detained, please see below.

Informants in exile with knowledge of developments in the Wonpo area said that the November 2019 protests took place against a background of heightened discontent after local officials placed increasing demands on resettled herders and other residents. The officials had required the former herders to publicly praise the Chinese government’s “Poverty Alleviation” policies, which are being carried out throughout China and which in Tibet generally include the compulsory resettlement of nomads and other rural dwellers.

Officials had reportedly ordered former herders and other poor families in Wonpo, which has approximately 2,000 households, to declare on camera or to visiting officials that their lives had improved as a result of the anti-poverty drive. “Poor families are made to borrow other peoples’ cattle and furniture and so on in order to put on a show of having been made richer,” the source said, and local officials “threatened many poor households that if they didn’t have those things, then they should borrow them from others and put on a show, or else later they would be detained and punished.”

The source said that local officials in Wonpo “were planning another such show just before November 7 [2019] and … this made people angry. There was a lot of opinion and writing about it and it was at that time that this protest took place.”

Radio Free Asia reported that during the first Wonpo protest in November 2019, “the nomads’ livelihoods have gone from bad to worse [following resettlement], and, not having any other sources of income, they have to depend solely on government subsidies for their survival.” The report quoted a local source as saying at the time, “during tours to the area by Chinese officials, the resettled nomads

are forced to put up pictures of Chinese national leaders and praise China’s ruling Communist Party in public speeches, which are then filmed and distributed to Chinese mass media.”

During a wave of protests by Tibetans against Chinese rule in 2008, monks at Wonpo monastery refused to hoist Chinese national flags on the monastery’s roofs. An ensuing crackdown led to searches of Tibetan homes and scores of detentions, with at least three monks given prison sentences, according to foreign media reports.

Armed police were deployed in the local community, which was singled out for surveillance and restrictions by the authorities, leading to further protests and arrests in 2012. Two other Wonpo monks, Lobsang Lhundrub and Choechok, were detained in December 2017 and March 2018 respectively; Choechok was released two years later.

So-tra, Ch.: Suozha 所扎, also known as Woezer, about 20, father’s name So-tse, mother’s name Golo. Monk at Wonpo monastery, detained November 9, 2019 for involvement in a protest on November 7, 2019. Sentenced on December 14, 2020 to three years for incitement to split the country.

Choegyal, Ch.: Qujia 曲加, 23, father’s name Yonga, mother’s name Tolha. Detained on November 21, 2019 for involvement in a protest on that day. Sentenced on December 14, 2020 to four years for incitement to split the country.

Yonten, Ch.: Yongdeng 拥等, 22 or under, father’s name Oepa. Detained on November 21, 2019 for involvement in a protest on that day. Sentenced on December 14, 2020 to four years for incitement to split the country.