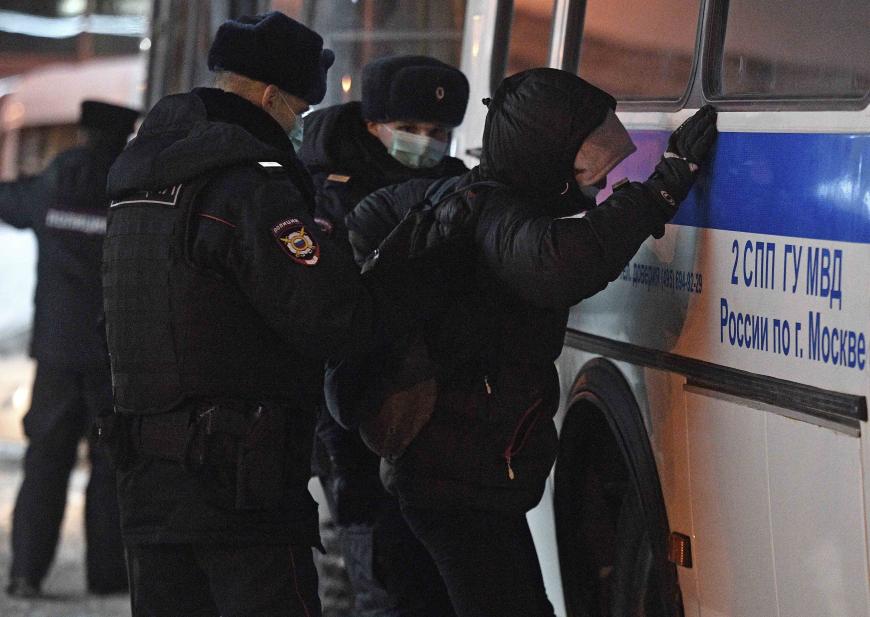 The authorities should cease these unlawful attacks on freedom of expression and instead focus on ensuring safety measures to protect those who wish to assemble peacefully.

“In the past year Russian authorities have effectively banned all peaceful protest by the political opposition and prosecuted anyone who has refused to comply,” said Hugh Williamson, Europe and Central Asia director at Human Rights Watch. “People have every right to peacefully protest injustices, including in Navalny’s case, through free speech and peaceful assemblies, and the authorities have an obligation to allow them to safely do so.”

Navalny was arrested immediately upon his return to Russia on January 17, after medical treatment in Germany for a near-fatal poisoning. At an extraordinary hearing at a police station, a judge authorized his detention for 30 days during which his suspended sentence could be revoked and replaced by prison time, allegedly for parole violations. Several prominent lawyers condemnedthe ruling as unlawful. The authorities put Navalny on a wanted list for failure to report to a parole officer while he was in Germany one day before his parole period expired.

In a video address recorded at the police station, Navalny called on his supporters to take to the streets to protest. Soon thereafter, his team called for coordinated protests on January 23.

Moscow authorities announced that they will deny any requests from Navalny’s supporters to hold protests because there is a blanket ban on public assemblies imposed in the city since November 2020 due to the Covid-19 pandemic. Authorities in several cities across Russia issued similar statements, quoting pandemic restrictions or noncompliance with the minimum 10-day advance notification rule, as activists attempted to obtain official authorization to gather, required by law. The head of Navalny’s Moscow team headquarters stated that they see no point in seeking official authorizations for protests because they would not be authorized.

Russian youth took to social media to call on others to attend the protests. In response, the Russian authorities demanded that social media companies take down those videos and threatened them with hefty fines. The prosecutor’s general’s office demanded that the companies restrict access to “illegal information” online.

Media and activists report that the administrative authorities in several Russian state universities, colleges, and schools threatened students with expulsion and some scheduled mandatory classes on January 23 to prevent attendance at the Navalny protests. In at least one case, a college administration reportedly compiled and published lists of students subscribing to Navalny groups on social media, disclosing personal data including their names and home addresses.

The Interior Ministry announced that police are already “preparing” for protests and threatened to prosecute anyone calling on people to participate.

In parallel, the authorities harassed numerous well-known civic activists and several media personalities with written and verbal warnings about liability for participation in “unauthorized gatherings.”

Police also visited the homes of staff from the Foundation Against Corruption (FBK) affiliated with Navalny and his team’s offices, and delivered warnings about what could happen if they participate in protests.

Police detained several FBK’s staff and members of Navalny’s team on January 21. Vladlen Los, a lawyer with FBK, was detained in a hotel, where he was staying after he noticed surveillance outside his house the previous day. He was charged with disobeying police orders and as a Belarussian national was ordered to leave Russia by January 25 with a ban on re-entry until November 2023.

Another FBK lawyer and opposition politician, Liubov Sobol, was detained for publicly calling for participation in the unauthorized protest. Her lawyer who was with her when she was arrested was not allowed access to her at the police station for four hours. Georgiy Alburov, a FBK staff member, was detained at a train station in Moscow. Navalny’s press secretary, Kira Yarmish, was detained at her home and charged with violating the rules on public assemblies.

At least two activists from regional headquarters of Navalny’s team – Anastassiya Panchenko in Krasnodar and Ragnar Rein in Kaliningrad – were also detained on January 21. It is likely that more activists could be detained ahead of the protests.

Russia’s parliamentary commission on foreign interference announced on January 21 that it will be looking for evidence of “foreign hands” behind the planned protests.

The efforts to prevent people from participating in peaceful public protests violate rights to freedom of expression and assembly and the prohibition on arbitrary detention, guaranteed by the European Convention on Human Rights (ECHR), the International Covenant on Civil and Political Rights (ICCPR), and in Russia’s own constitution.

International law requires any limitations on peaceful assemblies and free speech to be both necessary and proportionate. As the European Court of Human Rights has made clear, the freedom to take part in a peaceful assembly is of such importance that a person cannot be subject to a sanction, even a minor one, for participation in a demonstration that has been prohibited, so long as this person does not commit an act of violence or similar crime.

The Russian authorities have the discretion to limit public gatherings to prevent the spread of the virus that causes Covid-19, but these must be strictly necessary, proportionate, and not applied in an arbitrary nor discriminatory manner, Human Rights Watch said.

Russia has not announced a state of emergency in relation to the pandemic and has not sought to justify its extreme limitations on peaceful assemblies as an act of derogation (or exemption) from its obligations under human rights treaties. The Council of Europe’s human rights commissioner earlier called on the Russian authorities to overhaul its legislation and practice governing freedom of assembly and of expression, including in the context of the pandemic, to align them with European human rights standards. The commissioner reiterated that that the health restrictions introduced to fight the Covid-19 pandemic must not be used to unduly limit human rights and freedoms.

The UN special rapporteur on the rights to freedom of peaceful assembly and of association stated that “[s]tates’ responses to Covid-19 threat should not halt freedoms of assembly and association” and that while “[r]estrictions based on public health concerns are justified, ... [i]t is imperative the crisis not be used as a pretext to suppress rights in general or the rights to freedom of peaceful assembly … in particular.”

“Russia’s authorities should stop invoking Covid-19 as pretext to violate freedom of assembly and should end its practice of equating peaceful criticism with unlawful activity,” Williamson said.