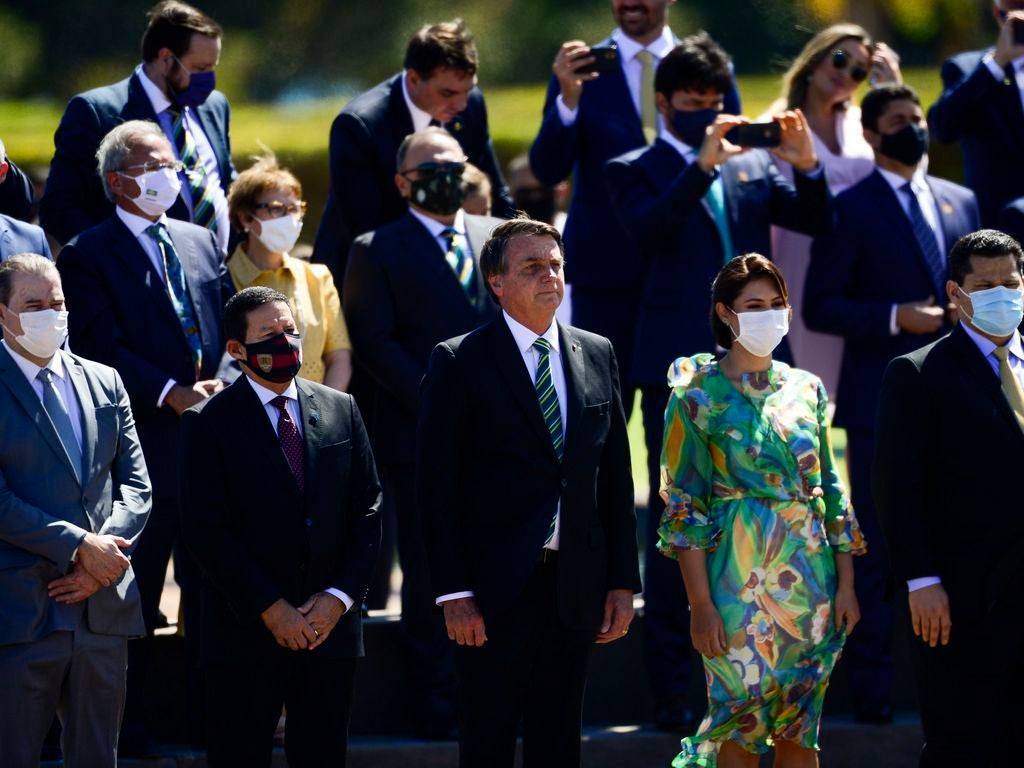 The administration of Brazilian President Jair Bolsonaro is using a repressive law enacted during the country’s dictatorship (1964-1985) to seek prison sentences against people who have criticized its disastrous response to the Covid-19 pandemic, Human Rights Watch said today.

Since June 2020, federal police have opened criminal investigations against at least four government critics under the 1983 National Security Law at the administration’s request.

The government has also called for criminal investigation of a Supreme Court justice based on the National Security Law, and of two journalists based on a different law. Federal police and prosecutors have not said whether they have opened investigations in those three cases.

“The National Security Law grants special protections to the reputations of high-level officials, including the president, and the armed forces that no other Brazilian citizen or institution receives,” said José Miguel Vivanco, Americas director at Human Rights Watch. “In a democratic country that protects freedom of expression, the public should be able to scrutinize and criticize officials, and freely debate matters in the public interest, without fear of retaliation or punishment.”

On June 15, Justice Minister André Mendonça said on Twitter that he had asked the Federal Police and the Attorney General’s Office to investigate Renato Aroeira for publishing a cartoon and Ricardo Noblat, a journalist, for sharing it online.

The cartoon depicted President Bolsonaro with a brush after painting the ends of a red cross to transform it into a swastika. On the cartoon, Bolsonaro says: “Let’s invade another,” in reference to a video in which he urged supporters to invade hospitals to check whether they were actually full of Covid-19 patients, which he questioned.

Mendonça said the cartoon–and Noblat’s sharing it online–violated Article 26 of the National Security Law, which criminalizes slander or defamation of the president or the heads of Congress and the Supreme Court, punishing the offense with prison sentences of up to four years.

On July 7, Mendonça tweeted that he would ask the Federal Police to investigate Helio Schwartsman, an opinion writer, also under Article 26, for a column in which he accused Bolsonaro of sabotaging efforts to contain Covid-19 and said he hoped the president, who had been diagnosed with the virus at the time, would die; suggesting that his death would save lives.

Federal Police opened investigations into the three cases. The Superior Court of Justice temporarily suspended the investigation against Schwartsman.

On July 14, the Defense Ministry asked the Attorney General’s Office to investigate Supreme Court Justice Gilmar Mendes for criticizing the lack of action by the Health Ministry, led by an active-duty general, to curb the spread of Covid-19 and for saying that “the army is associating itself with a genocide.” The Defense Ministry said that statement violated Article 23 of the National Security Law, which punishes with up to four years in prison anyone who “incites animosity among the armed forces or between them and social classes or civilian institutions,” as well as additional provisions in the penal and military codes.

The Attorney General has not said whether it has opened an investigation.

On July 20, Mendonça sent a written request to the director of the Federal Police to investigate Marcelo Feller, a criminal defense lawyer, for violating Article 26 of the National Security Law. During a television debate about the army comment made by justice Mendes, Feller said a study showed President Bolsonaro’s statements led people not to take adequate measures against Covid-19 and that, as a result, he was responsible for at least 10 percent of Covid-19 deaths in the country.

Eight days later, the Federal Police opened an investigation, led by its department of counterintelligence. Feller only learned of the investigation on January 13, 2021, when Federal Police called him to make a statement, Feller told Human Rights Watch. “It’s an attempt to silence me,” Feller said.

On January 21, 2021 a federal prosecutor closed the police investigation against Feller, stating that the National Security Law cannot be used “to persecute anyone who opposes the government in a lawful way, expressing criticisms or opinions that are unfavorable to the government, however harsh they may be.” Two days later, the Superior Court of Justice also suspended Feller’s statement before police, finding he had not committed any crime.

On January 10, Mendonça said on Twitter he would ask the police to investigate two journalists “for instigating two presidents to commit suicide.” He was referring to Ruy Castro, a writer, who said in an opinion piece that if then-United States President Donald Trump wanted to become a martyr, he could commit suicide, and President Bolsonaro could imitate him. The minister was also referring to Noblat, the journalist, who shared the column online.

Mendonça accused both of violating Article 122 of the Penal Code, which punishes “inducing or instigating” a suicide with up to four years in prison. That article is intended to punish conduct that is likely to lead to a suicide, which is not the case here, where it is being used to curb protected speech, Human Rights Watch said.

The UN special rapporteur on the promotion and protection of the right to freedom of opinion stated in 2000 that imprisonment should never be applied as a punishment for defamation, and recommended that countries repeal their criminal defamation laws.

Article 11 of the Declaration of Principles on Freedom of Expression, adopted by the Inter-American Commission on Human Rights in 2000, states that “public officials are subject to greater scrutiny by society. Laws that penalize offensive expressions directed at public officials, generally known [in Latin America] as “desacato laws,” restrict freedom of expression and the right to information.”

The Inter-American Commission’s special rapporteur on freedom of expression has said that “the use of criminal mechanisms to punish expression in matters of public interest or about public officials can constitute a form of indirect censorship, due to its intimidating and inhibiting effect on public debate.”

“President Bolsonaro, an overt defender of Brazil’s past military government, is using a repressive dictatorship-era law to try to intimidate and silence people who disagree with him,” Vivanco said. “Brazil’s Congress should bring the country’s laws into compliance with international human rights standards and revoke articles 23, 26, and other provisions in the National Security Law that violate freedom of expression.”