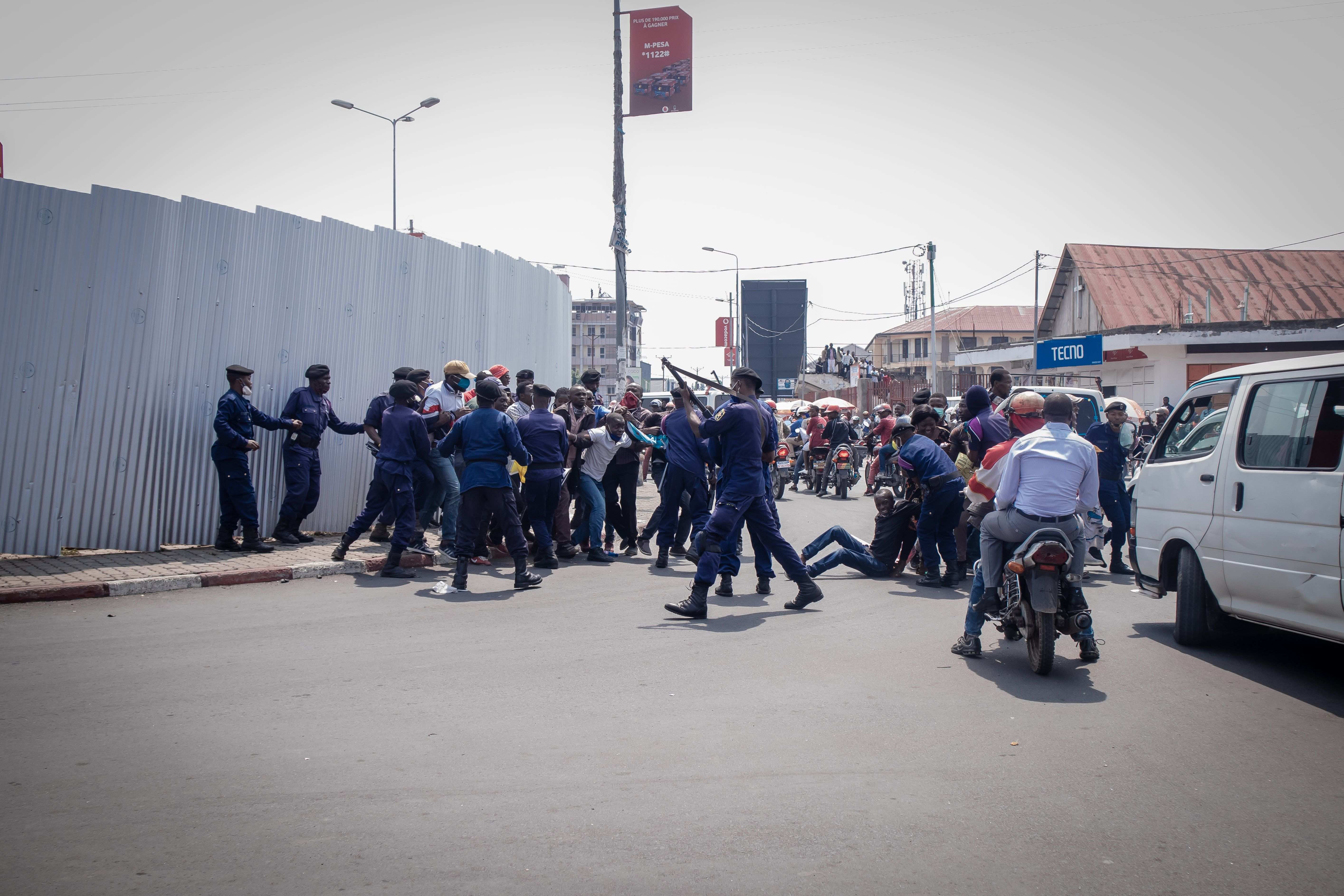 (Kinshasa) – President Felix Tshisekedi’s administration in the Democratic Republic of Congo has increasingly cracked down on the media and activist groups during its two years in office. Despite some initial steps to advance a human rights agenda, the government has threatened, arbitrarily arrested and detained, and prosecuted several dozen journalists, activists, and others deemed critical of the government.

Human Rights Watch interviewed 83 people by phone between January 2020 and January 2021, including victims of abuse, lawyers, activists, and journalists. The researchers found at least 109 cases of arbitrary arrests and harassment over the past year. Many victims were journalists, who faced intimidation, threats, and sometimes beatings. Intelligence agents from the National Intelligence Agency (Agence nationale de renseignements or ANR) were involved in at least 16 cases.

In the most recent case, eight young pro-democracy activists from the citizen movement Lucha were detained for one month in the northeastern town of Beni after participating in a December 19 march calling for peace in the area and denouncing the lack of civilian protection. They faced 10 years in prison on trumped-up charges of “sabotage and violence against state security guards.”

“They took us to a room [at the police station] and sat us on the floor,” one of the activists told Human Rights Watch. “Police who were outside but close to the window fired teargas into the room. We had no choice but to try to escape. I don’t know how but some of us managed to open the door. I fainted once outside.”

Following a public outcry, a military court acquitted them on January 20.

On August 20, in Lodja, in the central province of Sankuru, soldiers and the police stormed the office of the privately owned Radio Losanganya and arrested Hubert Djoko, a journalist, and Albert Lokongo, a radio technician, accusing them of supporting the governor’s longstanding political rival. They took them to the stadium where the governor was speaking.

“They whipped us and had us repeat what we said on air,” said Djoko. “The governor then gave the order to take us to the police station. In the morning, the governor sent two motorcycles to parade us across town to show we had been arrested while his supporters shouted: ‘We must kill them!’” Djoko and Lokongo said they were both beaten in custody. They were accused of incitement to tribal hatred and civil disobedience, and released on August 22. On September 16, their editor, François Lendo, was also arrested and detained for 11 days on charges of “contempt for the governor.”

In Kinshasa, on November 16, the intelligence services arrested a popular singer, Elisabeth Tshala Muana, a longtime member of former president Joseph Kabila’s political party, and detained her for 24 hours following the release of her single “Ingratitude.” She was accused of targeting Tshisekedi, though no names were featured in the song. The authorities banned her song from the airwaves.

The crackdown over the past year is in stark contrast with Tshisekedi’s first year in office, which was marked by a significant decline in political repression compared with Joseph Kabila’s administration, Human Rights Watch said. In 2019, Tshisekedi released most political prisoners, and Congolese living in exile were allowed to return to the country. However, security forces did arbitrarily detain and beat peaceful protesters in some instances during that year.

Few security and intelligence officials implicated in human rights abuses under former President Joseph Kabila were held to account, and many continue to hold positions of authority. Impunity for past repression only fuels the continuation of the same abusive tactics, Human Rights Watch said.

Congo’s human rights minister, André Lite, told Human Rights Watch by phone that he “once again, condemn[ed] these rights violations.... Whereas freedom should be the principle and detention the exception, we tend to make arrest before investigating in Congo and, unfortunately, detention has become the rule. When a state official, whatever their rank, is responsible for an assault on freedom, they must be questioned and prosecuted.”

The Congolese government is obligated under international human rights law to respect and uphold the right of everyone in the country to peacefully protest and freely receive and disseminate all types of information. Regional and international partners should press Congo to protect the rights to peaceful expression and assembly.

The authorities should end the harassment of journalists and media outlets and drop all charges against those held for exercising their basic rights. Congo ranked among the world’s 30 worst countries violating press freedom in 2020, according to the World Press Freedom Index, despite Tshisekedi’s pledge to advance the media into “a real fourth estate.” The government should also repeal criminal defamation laws and take concrete measures to protect journalists in line with regional and international human rights standards.

Tshisekedi should be outspoken in defense of human rights and take action against provincial governors who seek to punish those critical of their policies. Intelligence agents and other security personnel should fully comply with international human rights standards relating to arrest, detention, and due process. Military courts should not try civilians. When serious violations occur, the authorities should promptly and impartially investigate and take appropriate disciplinary or legal action against those responsible, regardless of position or rank.

“Two years into the new administration, the crackdown on free speech and peaceful protest is intensifying,” Fessy said. “Congo’s international partners should publicly and privately raise concerns about escalating repression in the country with the president and his advisers.”

Since July, Human Rights Watch has documented an additional 65 cases. This list is not exhaustive.

On July 9, a court sentenced Henry Maggie, the vice president of the youth league for former president Joseph Kabila’s People’s Party for Reconstruction and Democracy (PPRD), to 18 months in prison for contempt of the president, for suggesting in a media interview that Tshisekedi had not won the 2018 elections. An appeals court later added an extra six months to this sentence. Maggie said he was only informed of the new sentence in October. He has been in prison ever since his arrest in May.

On October 1, prosecutors summoned Pascal Mulegwa, a journalist with Radio France Internationale (RFI), in Kinshasa in a criminal defamation case brought against him by a senator and former minister, José Makila, over a story in which Mulegwa quoted a nongovernmental organization report accusing the plaintiff of embezzlement. Mulegwa’s trial, which started on December 22, has been suspended pending an appeal.

Pius Romain Rolland Ngoie, a journalist for Radio Télévision Groupe Avenir (RTGA), was arrested on December 22, and charged with criminally defaming Fabrice Puela, a member of parliament. He is in Kinshasa’s central prison in pretrial detention

On November 28, national intelligence agency officers arrested Barnabé Wimana Isombia Milinganyo, head of the Rally of Congolese Leaders (Rassemblement des leaders Congolais) party, after a television broadcast and immediately took him to court. He was tried and sentenced on the same day to three years in prison and fined US$10,000 for “insulting the head of state and threats of attack.” Although his criticism of the president on the television program raised possible incitement issues, his due process rights were violated. His appeal is ongoing.

In July, a group of seven lawyers, activists, and journalists fled to Kinshasa from their hometown of Matadi, in the western province of Kongo Central, where they faced threats, beatings, and abduction attempts. Roukiya Mpaka, Rachidi Malundama, Samantha Mushiya, Guylain Kiangabeni, Tristan Mavungu, Erick Ngoma, and André Misumbu took part in protests prompted by a sex scandal involving the provincial vice-governor and called for the governor’s resignation. The provincial prosecutor subsequently issued arrest warrants against some of them, on charges of contempt toward officials and contempt of President Tshisekedi. They have so far stayed away from Matadi for fear of arrest.

On October 10, national intelligence officers arrested Farly Kalombo, a journalist for Réveil du Congo, a community radio station, following his reporting on alleged human rights violations, including by the National Intelligence Agency, in and around the town of Ilebo. He said that the officers stole his belongings and forced him to board a barge to Kinshasa, where he is living in precarious conditions, unable to return home.

On July 28, police arrested Elly Munganga, Patrick Twaeni, Ilengi Ndembe, Ruphin Wema, and Henri Belafekaka, human rights defenders, as they demonstrated against mismanagement by the provincial authorities, calling for the governor to resign. They were held at the prosecutor’s office and released without charges on July 30.

On December 18, the police arrested Josué Wallay Akuzwe, Djemba Uchu, Placide Itula, Emma Mwinuka, and Daniel Kikuni, all activists with Lucha RDC-Afrique, after they demonstrated for security and peace in the province. They were held for four days in a cell at the prosecutor’s office before being transferred to Goma’s central prison for 10 days. They were not informed of the charges or motives that prompted their arrest. They were released on January 1.

Patrice Lwabaguma, Patrick Nyamatomwa, and Gédéon Fikiri Kanigi, all activists, were arrested on July 20 and accused of threatening state security, after flags of a so-called “Kivu Republic” were raised in Bukavu earlier that month. They remain in detention at Bukavu’s central prison while awaiting a verdict from the court. Lwabaguma had initiated a petition calling for the release of Tshisekedi’s former chief of staff, Vital Kamerhe, who had been sentenced to 20 years in prison for corruption.