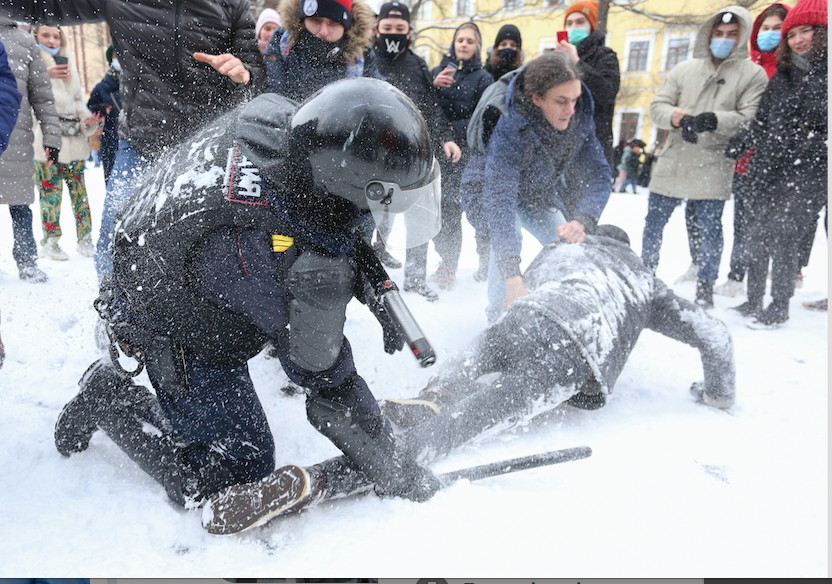 (Moscow, February 1, 2021) – For the second weekend in a row, Russian police forcibly and at times brutally dispersed peaceful protests, arbitrarily detaining more than 5,000 people across Russia, Human Rights Watch said today. That topped the previous record for the largest number of people detained on a single day, set on January 23, 2021. The protesters expressed outrage over the arrest of political opposition figure Alexei Navalny and state corruption, among other grievances.

The authorities responded to the January 31 protests as they had the previous weekend, with numerous incidents of police brutality caught on cameras by journalists and private citizens, detentions of journalists and passers-by, and the opening of criminal cases against protesters. Again police arrested and raided the homes of Navalny’s associates and others the day before the protest, in a clear effort to stop them protesting and to intimidate others. Like last week, incidents of violence by protesters were isolated and almost exclusively in response to police use of force.

“Russian authorities continue to pervert reality and pretend peaceful protesters are a violent mob, which they clearly are not,” said Damelya Aitkhozhina, Russia researcher at Human Rights Watch. “Russian authorities are heading the wrong way with more abusive security measures, more police on the streets, and more footage of injured people – they need to start listening to the peaceful protesters and respecting their rights.”

As with last week’s protest, authorities gave very low crowd numbers. The Interior Minister asserted there were only 2,000 protesters at the Moscow demonstration, where a Human Rights Watch researcher observed a much greater number there by early afternoon.  Human rights monitors report that in Moscow over 1,600 people were detained.

The security measures put in place were clearly disproportionate to the official estimates of protester numbers, Human Rights Watch said, and a wholly inappropriate response to peaceful albeit unsanctioned protests.

The Human Rights Watch researcher witnessed central Moscow effectively sealed off, with most entrances and exits to metro stations in the area closed. Metal barrier fencing was installed along main streets, and an overwhelming police presence was visible on the streets and in the metro system. National Guard transport vehicles and police patrol cars, buses and vans were parked along Moscow’s Garden Ring road – which runs around the city center – and at other locations. On January 31, the police continually demanded over loudspeakers that the protesters leave the area, saying that remaining there was against the law. The authorities also reminded protesters of the ban on public gatherings and the need for social distancing, even though almost all restrictions linked to Covid-19 had been lifted in the city.

Gatherings in cities throughout Russia were peaceful, with only isolated incidents of protester altercations with police who were detaining and using force against protesters or journalists. Still, police in many instances using excessive force to disperse crowds, beating protesters and in some cases journalists. Numerous incidents of police brutality were caught on camera. For example, riot police in Kazan forced protesters to lie face down and kneel in the snow, policeman in Chelyabinsk broke an elderly woman’s hand, in Moscow police viciously beat with truncheons women sitting in the snow and shouting “we are unarmed.” In St. Petersburg, police violently beat a journalist wearing a jacket clearly marked “Press” and used stun guns on non-violent protesters.

Ahead of the protest, police across Russia raided the homes of Navalny’s affiliates and well-known activists in and detained them, while other activists and students faced threats and intimidation in an attempt to prevent their participation in the protests. The Russian authorities also continued to open criminal cases on charges of allegedly violating rules imposed due to the pandemic, calling on people to attend an unauthorized gathering, involving minors in illegal activities, calling for mass riots, and violence against police.

Following the January 23 protest, the Moscow detention centers were full, and human rights groups monitoring peaceful assemblies reported that police buses were driving detainees around for hours because there was no space left in any centers. During this time the protesters were not given water, food or access to a toilet. Marina Litvinovich, a member of Moscow’s Public Monitoring Commission (ONK), an independent expert body authorized to monitor detention sites, posted on Facebook that some had to stay overnight in police buses, again, with no water, food or toilet visits, before finally being transferred police stations cells. Some detainees were held in a migration detention center, Litvinovich reported in a post, saying the activists had delivered drinking water there.

These efforts to prevent people from participating in peaceful public protests violate rights to freedom of expression and assembly and the prohibition on arbitrary detention, guaranteed by the European Convention on Human Rights, the International Covenant on Civil and Political Rights, and Russia’s own constitution.

International law requires any limitations on peaceful assemblies and free speech to be both necessary and proportionate. As the European Court of Human Rights has made clear, the freedom to take part in a peaceful assembly is of such importance that a person cannot be subject to a sanction, even a minor one, for participating in a banned demonstration so long as they do not commit an act of violence or similar crime.

The court has repeatedly found that Russia violated its obligations relating to freedom of assembly. The court ordered Russia to take “appropriate legislative and/or other general measures to secure in its domestic legal order a mechanism requiring the competent authorities to have due regard to the fundamental character of the freedom of peaceful assembly and show appropriate tolerance towards unauthorised but peaceful gatherings causing only a certain disruption to ordinary life not going beyond a level of minor disturbance; …and to strike a fair balance between [legitimate] interests, on the one hand, and those of the individual in exercising his or her right to freedom of peaceful assembly, on the other.” The court also reminded the Russian government that police brutality against peaceful protesters can have a chilling effect and discourage others from taking part in similar public gatherings and the authorities have obligation to act on their own initiative to investigate the actions of law-enforcement whenever there is a confrontation between police and protesters.

While Russian authorities have the discretion to limit public gatherings to prevent the spread of the virus that causes Covid-19, these limitations must be strictly necessary, proportionate, and not applied in an arbitrary or discriminatory manner, such as for politically motivated purposes.

“This abusive state response to unsanctioned but peaceful protests cannot be justified,” said Aitkhozhina. “It’s time for Russian authorities to show they can behave like a democracy built on rule of law and human rights, and engage with this ever-growing dissent. The other members of the Council of Europe should denounce Russia’s anti-democratic behavior and urge Moscow to change course.”