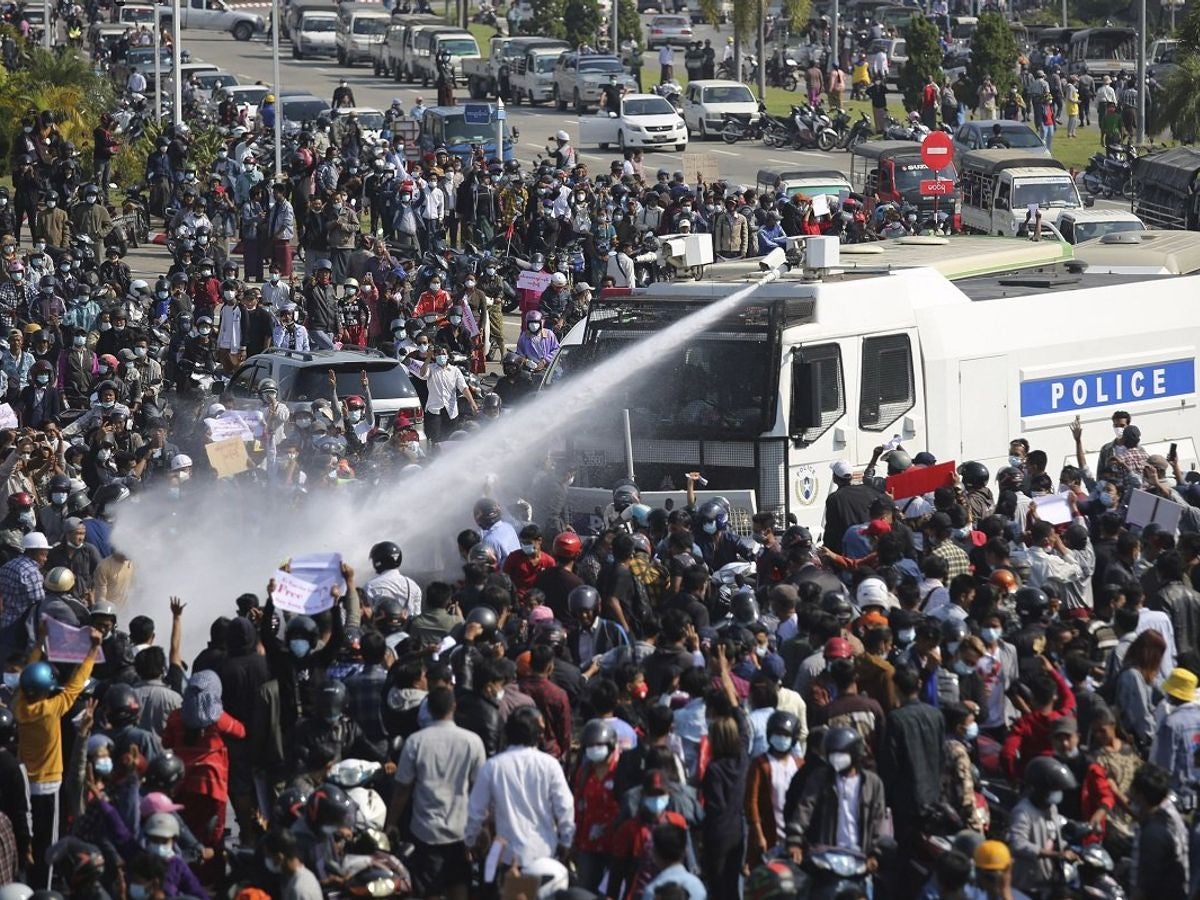 (New York) – Myanmar police should immediately end the use of excessive and lethal force against people protesting the February 1, 2021, military coup, Human Rights Watch said today. On February 9, police shot a young woman in the back of her head and wounded a man in his chest at a protest in the capital, Naypyidaw, a doctor reported.

On February 8, military authorities imposed a curfew and overly broad restrictions on gatherings in 36 townships, effectively making all peaceful assemblies unlawful, in violation of international law. Despite the restrictions, on February 8 and 9, hundreds of thousands of people demonstrated in largely peaceful protests across the country to call for the military to relinquish power and return it to the elected government. In response, the police used teargas, water cannons, rubber bullets, and live ammunition.

“Myanmar police shooting at a woman demonstrator whose back was turned is unconscionable as well as unlawful,” said Richard Weir, crisis and conflict researcher. “The police need to stop responding to peaceful protests by firing off guns and immediately investigate alleged wrongful use of force. Myanmar’s military junta should rescind its draconian orders on protests and end its crackdown.”

Human Rights Watch spoke to a doctor and reviewed and verified four photographs and two videos posted on Facebook of a demonstration on the afternoon of February 9 in Naypyidaw. One 84-second video shows a group of demonstrators under a green awning approximately 12 meters from a police vehicle mounted with water cannons. Several demonstrators can be seen throwing debris toward the police and the police vehicle nearby. The police vehicle then fires a stream of water at the protesters under and near the awning.

In the video, a woman identified later as medical staff Mya Thwe Thwe Khine, 20, wearing a red t-shirt and helmet at the front of the line, is struck by the water cannon’s stream. Another woman holds her hand and helps to guide her away from the stream of water. As Mya Thwe Thwe Khine turns away from the water blast and the police line, a crack is heard, and she slumps to the ground. A line of police officers is seen positioned in the direction from which she was shot.

Several other demonstrators tend to her and carry her away from the front of the area near the green awning. While she is being picked up and carried, water is sprayed at least three more times in the direction of the awning toward the people shielding behind it.

Human Rights Watch observed no actions by Mya Thwe Thwe Khine in the video that would suggest she was engaged in or threatening violent acts or had anything in her hands. By matching visible landmarks, Human Rights Watch confirmed the location of this video to be on Taungnyo Road near the Thapyaygone roundabout, matching the same location as the other video and photographs reviewed from the demonstration.

A doctor speaking for the hospital in Naypyidaw where the woman was being treated said that she had a projectile lodged in her head and had lost significant brain function. He said the wound was consistent with that of live ammunition, and that a metal bullet had penetrated the back of the right ear, and stopped on the left. At the time of writing, she remained in critical condition. The doctor identified another man, Soe Way, 20, who had also been treated at the hospital after being wounded at the same protest. The doctor said that Soe Way’s upper body wound was consistent with that of live ammunition. He is in stable condition.

The United Nations Basic Principles on the Use of Force and Firearms by Law Enforcement Officials states that security forces use the minimum necessary force at all times. In dispersing violent assemblies, firearms may only be used when other less harmful means are not practicable but must still be used to the minimum extent necessary. Law enforcement officers may only intentionally make lethal use of firearms when strictly unavoidable to protect life.

On February 8, 36 township authorities across 4 states and regions of Myanmar invoked section 144 of the Code of Criminal Procedure to restrict gatherings to no more than five people and imposed curfews from 8 p.m. to 4 a.m. Section 144 of the 1898 Code of Criminal Procedure is a broadly worded law that, on its face, gives a magistrate the authority to order individuals or the public to abstain from certain actions if, in the magistrate’s view, the order “is likely to prevent, or tends to prevent, obstruction, annoyance or injury, or risk of obstruction, annoyance or injury, to any person lawfully employed, or danger to human life, health or safety, or a disturbance of the public tranquillity, or a riot, or an affray.” Violation of such an order is punishable by up to six months in jail under section 188 of the Penal Code.

Since seizing power, the military has repeatedly restricted access to the internet, including a second near-total nationwide shutdown of internet connections that lasted approximately 24 hours as demonstrators took to the streets on February 6.

The broad ban on gatherings violates the right to peaceful assembly under international human rights law. As the UN Human Rights Council has recognized, the ability to exercise the right of peaceful assembly subject only to restrictions permitted under international law is indispensable to the full enjoyment of the right, “particularly where individuals may espouse minority or dissenting views.” The UN special rapporteur on the rights to freedom of assembly and of association has made clear that “freedom is to be considered the rule, and its restriction the exception.”

Restrictions on freedom of assembly need to be narrowly drawn to serve a legitimate purpose and restrict the right as little as possible. The total ban imposed in Myanmar is disproportionate to any legitimate state interest that might be served, Human Rights Watch said. Similarly, the imposition of criminal penalties on those who hold peaceful gatherings would be inconsistent with international norms that establish that no one should be held criminally liable for the mere act of organizing or participating in a peaceful assembly.

Under international human rights standards, any internet-based restrictions must be provided for in law and be necessary and proportionate and pursuant to a legitimate aim. Internet shutdowns fail to meet these standards and hinder access to information and communications needed for daily life, which is particularly vital during times of crisis and the Covid-19 pandemic. Restrictions also provide cover for human rights abuses, and complicate efforts to document government violations.

Internet service providers should uphold their responsibilities under the United Nations Guiding Principles on Business and Human Rights by resisting unjustified internet shutdowns. Service providers should insist upon a legal basis for any shutdown order, interpret requests to cause the least intrusive restrictions, and restore access as soon as possible.

On February 4, the UN Security Council issued a statement expressing deep concern over the declared state of emergency and the arbitrary detention of the members of the democratically elected government in Myanmar, and called on the military to fully respect human rights. On February 8, the United Nations announced that the Human Rights Council will hold a special session on the situation in Myanmar on February 12. The council is expected to issue a resolution on the situation in Myanmar following the meeting.

“Myanmar’s military has shown time and again that it is willing to resort to large-scale violence to quash dissent and remain in power,” Weir said. “UN member states urgently need to speak with one voice to warn the generals to end the use of lethal force and respect the right to peaceful protest, or face serious consequences.”