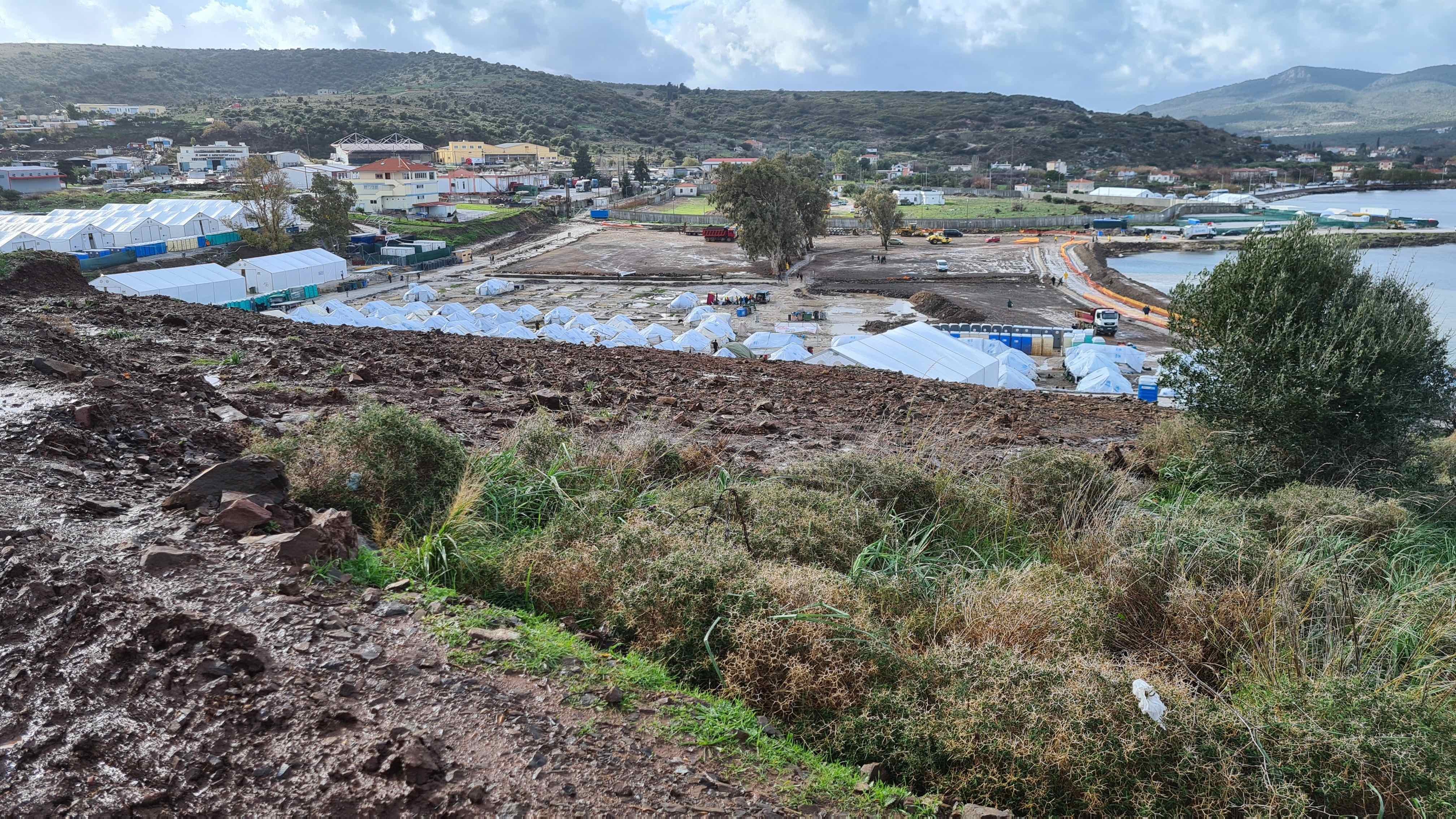 The Greek government is downplaying the risk of lead poisoning at a migrant camp built in part on top of a former firing range on Lesbos island to justify its own inadequate action, Human Rights Watch said in a question-and-answer document released today. Analysis by Human Rights Watch and experts of the Greek government’s testing shows the need for immediate comprehensive soil testing, blood testing for young children, and safety measures to mitigate the most serious health risks.

“For seven weeks after the Greek government received test results that showed unsafe lead levels it took minimal action, and now is continuing to downplay the risk and the need for further action,” said Belkis Wille, senior crisis and conflict researcher at Human Rights Watch. “Exposure to lead can cause lifelong harm, and the government should listen to environmental health experts who are advising immediate action to assess and address the full risk for residents and employees in the camp, and mitigate the harm.”

On January 27, 2021, the Greek government made public a report with the results of limited tests by the Greek Institute of Geology and Mineral Exploration (EAGME) at the camp in November 2020. Human Rights Watch shared those results with two environmental experts and a medical expert with a specialty in lead. The experts said that the reported testing was insufficient in scope to fully assess the extent and severity of lead contamination at the camp. They also noted that key elements of the methodology were not clearly described. The two environmental health experts said that the report also applied the wrong standards to some of the sample results, leading to a more positive conclusion than the facts warrant.

The Greek government report confirmed the presence of lead contamination in some areas of the Mavrovouni temporary migrant camp where 6,900 women, men, and children are living on Lesbos. Human Rights Watch sent a letter to the Greek government in early November calling on it to test the site because 21,000 square meters of the camp, according to the government, had been a small arms firing range from 1926 until the camp opened in September 2020. Firing ranges are well recognized as sites contaminated by lead, which is highly toxic, particularly to children and during pregnancy.

The fact that the Greek government-commissioned soil testing and then made the results public is a positive and necessary step to protect the health of residents and staff, Human Rights Watch said. Following the release, the government also committed to taking some mitigation measures, which are positive, and should be pursued expeditiously.

Beyond these commitments, Human Rights Watch urges the Greek authorities to urgently undertake further comprehensive soil testing to assess the extent and severity of lead contamination throughout the camp. The authorities should inform residents, especially people who have young children, are pregnant or lactating, of the health risks connected to lead exposure, offer free blood lead level testing to young children living near affected areas, and allow independent experts to review testing plans and measures to mitigate health risks.

The Human Rights Watch and two experts’ analysis of the EAGME report reveals that the government’s testing approach was insufficient to fully assess the extent and severity of lead contamination at the camp. For example, when asked why only three soil samples were taken from areas most at risk of contamination – the shooting range – a researcher involved in the testing told representatives of nongovernmental groups at a February 1 meeting that the November testing was meant to be an initial “scoping” of the camp for lead levels, rather than comprehensive testing. No further testing has taken place.

The EAGME report also fails to address questions about the sampling methodology and soil history. When conducting further tests, the government should ensure that all relevant information about the soil history is shared with researchers, and that the full methodology is made public along with results.

Human Rights Watch is also concerned that the government downplays the risk of elevated lead levels found in two of the samples, “MAV-1” and “MAV-12,” by incorrectly referencing less stringent Greek standards that are applicable for industrial areas and not for a residential camp in one case, and Greek residential standards instead of playground standards in the other.

Despite the severe limitations of the study, the government has used the report to support its claim that there is no risk from lead contamination at Mavrovouni camp, including in media statements, a “non-paper” distributed along with the report, and a presentation of the summary of the findings for nongovernmental groups, including those working at the camp. Instead, the authorities should inform the residents and staff about the risks of lead poisoning and ongoing testing and mitigation measures, acknowledging the current knowledge gaps.

The Greek government should immediately carry out additional comprehensive testing in the areas at high risk of contamination to help develop appropriate remediation measures, Human Rights Watch said. This should include soil at the foot of various walls formerly located within the range and the area south of sample “MAV-1,” where firing range projectiles would have landed. Prior to testing, it is vital for the government to share the scope of work with international experts for their input on field screening, sample collection and testing, and potential remediation measures.

Until testing after remediation demonstrates that the soil in the area is safe, camp authorities should move the administration area located in the vicinity of “MAV-1” away from it, remove tents in the vicinity of “MAV-12,” and fence off the areas where contaminated soil was found near “MAV-1” and “MAV-12.” This would prevent young children from playing there, and protect pregnant or lactating residents receiving services and staff working in the camp.

Given the elevated lead levels found in some areas of the camp, the government should urgently offer initial blood testing for children and pregnant residents and staff working there, prioritizing children between the ages of 9 months and 2 years who were living in tents in the vicinity of “MAV-12,” or spending time in the administrative area of “MAV-1.” People who have small children or are pregnant should be informed about the risks of lead exposure and be given the opportunity to ask questions and seek advice. Protocols for seeking informed consent of parents for testing their children should be followed, and parents should be given the test results. If elevated blood lead levels are found in residents or staff they should be urgently treated.

The European Commission, which financially supports the camp, should press the Greek government to urgently conduct comprehensive testing in the areas most at risk of contamination to help develop its remediation measures, or directly commission additional independent testing. The Commission should ensure full transparency and publicly report the measures taken to protect the residents and workers in the camp from any risk of exposure to lead.

“Until further testing takes place, there is no way for anyone living or working in Mavrovouni camp to know whether they are at risk or not,” Wille said. “That should be a matter of concern to the European Commission as well as Greek authorities.”