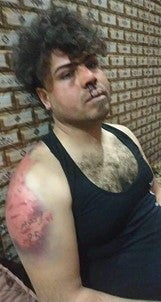 (Beirut) – On February 15, Iraqi authorities detained at least four men, with alleged ties to a unit within the Popular Mobilization Forces (PMF or Hashad, formally under the control of the prime minister) who are alleged to have killed at least four protesters in the southern city of Basra in January 2020. One of the detained men holds a senior police position. These arrests represent an important step in government efforts to fulfill its promise to hold accountable those who have abused or killed protesters, but authorities should take swift action to carry out further arrests of abusive forces where there is evidence that they are linked to recent attacks, Human Rights Watch said today.

“These arrests in Basra may represent a real change in the government’s willingness to hold its own forces accountable for perpetrating serious crimes and will help deter such abuses in the future,” said Belkis Wille, senior crisis and conflict researcher at Human Rights Watch. “The government should also ensure that the trials of the men are fair and devoid of any political influence.”

Protests broke out in south and central Iraq in October 2019, with violence and excessive force killing at least 487 protesters and wounding thousands more. At the same time, a range of armed forces targeted protesters with harassment, intimidation, arbitrary arrests, and enforced disappearances. In May 2020, then-newly appointed Prime Minister Mustafa al-Kadhimi announced the creation of a committee to investigate killings and other attacks on protesters but until now no information has been made public about the work or findings of the committee.

On February 15, al-Kadhimi announced on Twitter that “The death squad that terrorized our people in Basra, and killed innocents, are now in the hands of our heroic forces, on their way to a fair trial.” On the same day, a local media outlet publicized the names of four men detained for their alleged role in this death squad linked to the PMF Hezbollah Brigades with potential ties to another PMF unit as well. According to other media coverage, authorities arrested them for their roles in the killings of Jinan Madi, a paramedic who had been treating wounded protesters at demonstrations when she was killed, Ahmed Abdessamad, 37, a journalist, and his cameraman Safaa Ghali, 26, who had been covering the protests for Dijlah, a privately owned local station, and Mojtaba Ahmed al-Skini, 14, a protester. A source close to the government said that authorities had identified 16 men implicated in the killings, but most had already fled the country.

Given extensive documentation of the unfair nature of Iraq’s criminal justice system, which often relies solely on confessions to convict, the government and judicial authorities need to preserve the credibility of measures to rein in abusive security forces by ensuring that these trials are fair, Human Rights Watch said.

While the Basra arrests mark a positive step when it comes to accountability, PMF attacks on protesters have continued. Ali Naseer Alawy, 25, a prominent member of the protest movement in Najaf, told Human Rights Watch that on February 12, four armed masked men in black uniforms picked him up off the street within view of a police patrol, which did not intervene, at around 6:30 p.m. He said they put him into a white pickup truck with no license plate and drove him to an office where they blindfolded him and started beating his back and legs with the butts of their guns. He said,

I could tell there were many men in the room who were asking me all sorts of questions about other activists’ names and who was leading the protests in Najaf. They saw I had tattooed October 25, the first day of protests in Najaf, on my arm and they tried to remove it with an acid mixture. They also attached electric cables to me and shocked my chest and legs before I fainted.

Alawy said that when he regained consciousness, he found himself lying on a highway outside the city near his house. It was about 1 a.m. He went to the hospital where he spoke to police but said that because he did not know who the kidnappers were, there was no point in filing a complaint. He said he believes that they must wield power since nearby police had done nothing to intervene in his abduction. He shared two photographs with Human Rights Watch that show bruising and blood on his face and scarring on his shoulder and back around his tattoo. Alawy is currently in hiding and said he still receives threatening messages on Facebook.

In addition, there has been no accountability for other killings of protesters in Basra since 2019, despite the government’s commitments. For example, on October 3, 2019, Hussein Adel Madani was shot dead along with his wife by masked gunmen who stormed their house. The couples were taking part in ongoing protest. On August 14, 2020 two masked armed men in civilian dress shot and killed activist Tahseen Osama Ali, 30, in his apartment. On August 19, 2020, Reham Yacoub, a doctor and activist in the local protest movement since 2018, was shot by an unidentifiable armed man on the back of a motorcycle. As far as Human Rights Watch is aware, the authorities have yet to arrest any suspects of these killings.

“The government can prove there has been meaningful change only when protesters no longer fear getting hauled off the streets in broad daylight and held and tortured with impunity,” said Wille.