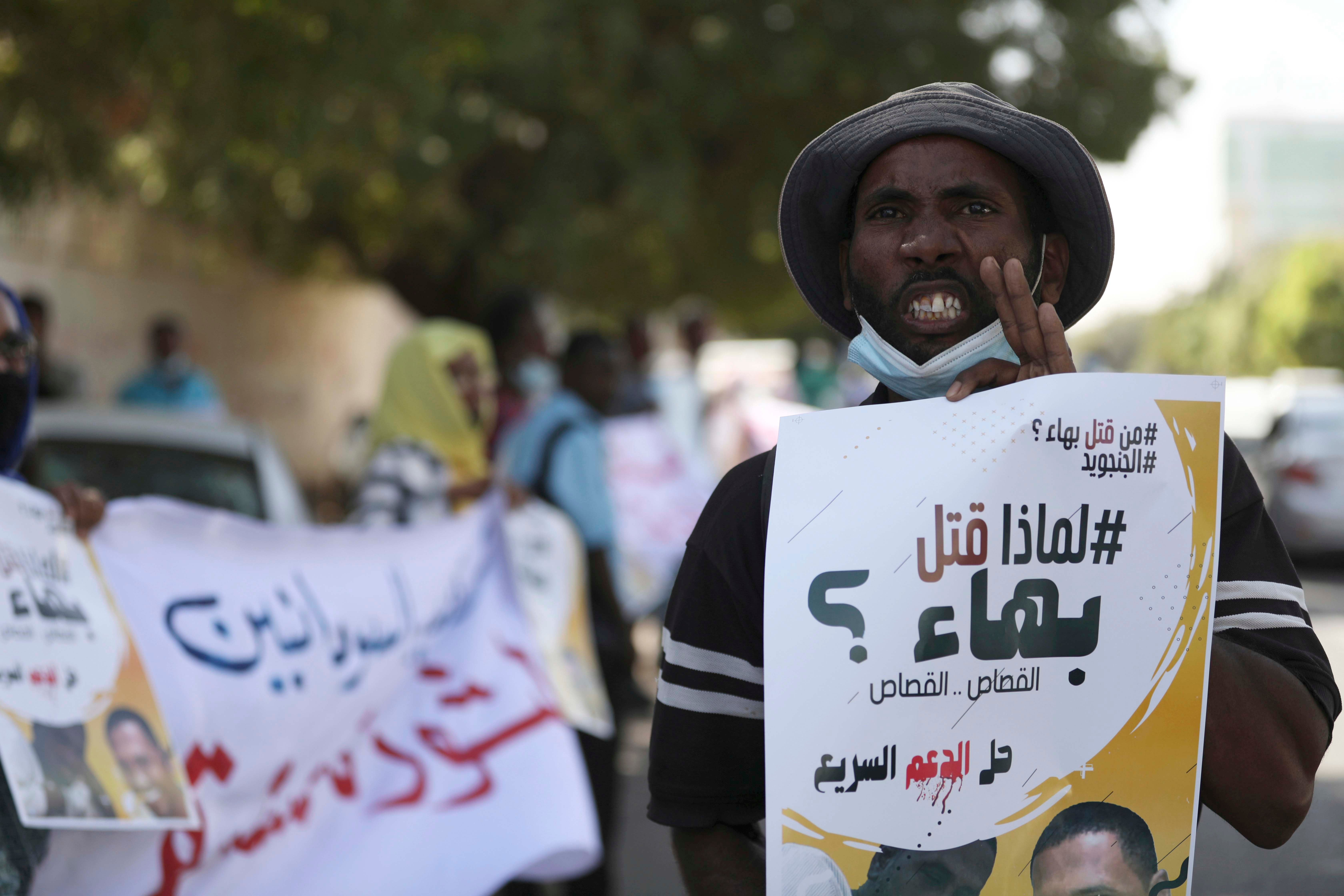 The detainees were held incommunicado or in circumstances constituting enforced disappearances. The authorities should take urgent steps to ensure that the RSF stops acting outside the law, and that all civilian detainees are immediately released.

“Sudan’s transitional government should rein in the Rapid Support Forces, which is assuming ever increasing power without any legal basis,” said Laetitia Bader, Horn of Africa director at Human Rights Watch. “It is completely unacceptable for military forces to hold civilians in custody instead of handing them over to civilian authorities or releasing them if that is not possible.”

Human Rights Watch documented multiple unlawful detentions of civilians in 2020 in Khartoum by the Rapid Support Forces, which has been responsible for serious abuses against civilians in Darfur and other conflict zones. Between September 2020 and February 2021, Human Rights Watch interviewed four former detainees, two family members, and a lawyer in cases in which the RSF had unlawfully held civilians.

The former detainees said that the security forces held them incommunicado and denied them access to lawyers and their families throughout their detention, which ranged from a week to over a month. Two detainees said RSF guards physically ill-treated them.

The authorities should credibly investigate reported arbitrary arrests, incommunicado detentions, enforced disappearances, and other abuse in custody, including the death of one detainee, Human Rights Watch said. If warranted, civilian authorities can pursue any credible evidence of criminal wrongdoing by former detainees in accordance with the law.

Under Sudan’s transitional constitutional charter, the RSF has been designated a regular military force. The force led the violent crackdown on protesters on June 3, 2019 in Khartoum neighborhoods and neighboring Bahri and Omdurman, which left at least 120 people dead and hundreds injured. The transitional government has continued to use RSF officers in crowd control and law enforcement operations.

Sudan’s armed forces, including the RSF, do not have legal authority to detain civilians or carry out law enforcement functions, thus making detentions of civilians illegal, Human Rights Watch said. Following the death, while in RSF custody, of 45-year-old Baha al-Din Nouri in Khartoum in December, the attorney general on January 21, 2021 issued an instruction explicitly limiting the powers of arrest and detention of civilians to the police and prosecutors, making clear that any detention by other forces is considered unlawful. Human Rights Watch was unable to confirm what, if any, steps the attorney general has taken to ensure the terms of the instruction are enforced, such as inspecting unlawful detention sites.

Mohamed Nouri, Baha al-Din Nouri’s brother, told Human Rights Watch that witnesses saw him being abducted by armed men in civilian clothes in southern Khartoum on December 16. Five days later, the family received a call informing them that Baha al-Din had died and that his body was at a hospital morgue in Omdurman. “Another relative went to the morgue and saw visible bruises on Baha al-Din’s body,” his brother said. “The morgue director pressured us to accept the body and his autopsy report suggesting that Nouri died due to sickness, but we refused.”

On December 27, forensic examiners conducted a second autopsy on instructions from the attorney general. The second autopsy report documented injuries, including brain hemorrhage caused by impact with a blunt object, that are consistent with beatings and that led to Baha al-Din Nouri’s death. On the same day, the RSF in a statement admitted that Baha al-Din had died in RSF intelligence custody and that it had revoked the immunity of the officials involved and handed them over to the attorney general. The attorney general also ordered the arrest of the morgue’s director, including on obstruction of justice charges related to this case. Names and ranks of the people arrested have not been made public.

“For us, the case should not be only against who tortured my brother,” Mohamed Nouri said. “All those involved including who issued the orders, aided, and contributed to the death of my brother should be held accountable.”

The Sudanese Professionals Association (SPA), an umbrella association of 17 Sudanese trade unions that largely spearheaded the 2019 protests against the ousted government, has initiated a campaign with other protest groups calling for an end to unlawful detentions by the RSF and urging the attorney general to investigate broader RSF detention practices.

For any deprivation of liberty to be lawful, it must be carried out on grounds and pursuant to a procedure established in domestic law that are themselves in accordance with the provisions of international human rights law. Powers of arrest should be precise, clear, and known to the public. The law should ensure that incommunicado detention and secret deprivation of liberty are prohibited in all circumstances and that people can only lawfully be held in officially recognized detention sites.

The authorities should investigate all reports of arbitrary detention of civilians by forces such as the RSF, hold those responsible to account, and speed up the much-needed process of security sector reform as stipulated in the transitional government’s constitutional charter, Human Rights Watch said.

The transitional government should move ahead with plans envisioned under the constitutional charter to establish a National Human Rights Commission in line with international standards, Human Rights Watch said. The mandate of such a commission should include access to RSF facilities and the authority to report publicly on findings and abuses. Additionally, the government should allow relevant international organizations, including the Office of the United Nations High Commissioner for Human Rights (OHCHR), access to all RSF facilities and ratify without reservations the International Convention for the Protection of All Persons from Enforced Disappearance and the United Nations Convention against Torture.

“If the transitional government is committed to breaking from the nation’s abusive past, it must ensure that RSF operates within the law,” Bader said. “The authorities should make it clear that members of the security forces will be held accountable under it if they contravene the law.”

For details regarding Rapid Support Forces (RSF) detention of civilians, please see below.

Human Rights Watch interviewed four former detainees unlawfully detained by the RSF in 2020. They said that the RSF detained them in two locations in eastern Khartoum, neither of which are legal or even acknowledged detention sites, consisting of converted office and living spaces rather than cells. One reported location, believed to belong to what the RSF describes as its intelligence branch, is in the al-Manshiya residential area, and the other is in the al-Riyadh compound at the former headquarters of the National Intelligence and Security Service (NISS) operations unit. Three of the former detainees said their captors identified themselves as affiliated with the RSF intelligence branch.

Two of the men said they were arrested by unidentified armed men on August 22, 2020 and taken to the RSF intelligence premises in al-Manshiya and later moved to al-Riyadh. Both spent about a week in RSF custody before being transferred to the police. They have been charged with terrorism-related offenses but have been released on bail.

One of the detainees, 25, said that RSF soldiers handcuffed him while he received treatment at the RSF medical unit in Khartoum North:

An RSF officer ordered his soldiers to handcuff and shackle us while we were receiving treatment. They even handcuffed and shackled a detainee who had heart problems and was already connected to a heart monitor. They left us in a cell with the handcuffs for 24 hours. It was a cold room. We complained to the guard saying the handcuffs were too tight, but the guards didn’t care.

He said his family spoke to the police and the attorney general’s office to get information about his whereabouts but received no information. Detention by state agents followed by a refusal to provide information about the detention or concealing information on the whereabouts of the detainee constitutes an enforced disappearance, a crime under international law.

A 33-year-old former detainee said the RSF refused to disclose the reasons for detaining him. He said RSF denied him access to a lawyer. He spent eight days in the al-Riyadh and al-Manshiya locations before being transferred to al-Huda federal prison.

In 2020, RSF detained people associated with Musa Hilal, the Darfuri militia leader and former Janjaweed leader implicated in serious crimes in Darfur between 2002 and 2005, who has been in detention since 2017. He is facing charges before a military court related to the Darfur armed conflict.

The RSF detained Abdulmalik Musa Salih, 27, a relative of Hilal’s, twice in 2020. In March, the RSF detained and held him for 33 days in a basement in al-Manshiya. He said that on the day of his release he was moved to al-Riyadh compound, where he was beaten and kicked by several RSF soldiers for about 30 minutes:

They [RSF] did not tell me why they were arresting me at the beginning. A couple of officers later told me that I am a traitor because I posted on Facebook criticizing the RSF and their leadership. They also ignored my requests to have a lawyer or to be taken to the police if they have a case against me.

The RSF detained him again in July and held him in a basement for 14 days in al-Riyadh. He has not been charged with any offense.

During the Omar al-Bashir era in Sudan, between 1989 and 2019, unlawful detention by the NISS was a widespread practice. Amendments introduced in July 2020 to the National Security Act removed arrest and detention powers from the security apparatus and renamed the agency the General Intelligence Service (GIS).

The 2017 RSF Act broadly defines the force’s tasks, including to carry out any orders from competent authorities, which has resulted in its involvement in intercepting migrants and a crackdown on economic crimes. But since al-Bashir was ousted as the country’s ruler in April 2019, the force has increasingly taken on a role in crowd control, resulting in abuses. Human Rights Watch found that the RSF had used excessive force against protesters in Omdurman on June 30, 2019, when seven protesters were killed. Human Rights Watch also found that the RSF was responsible for killing five protesters in the town of Kassala in eastern Sudan on October 15, 2020.