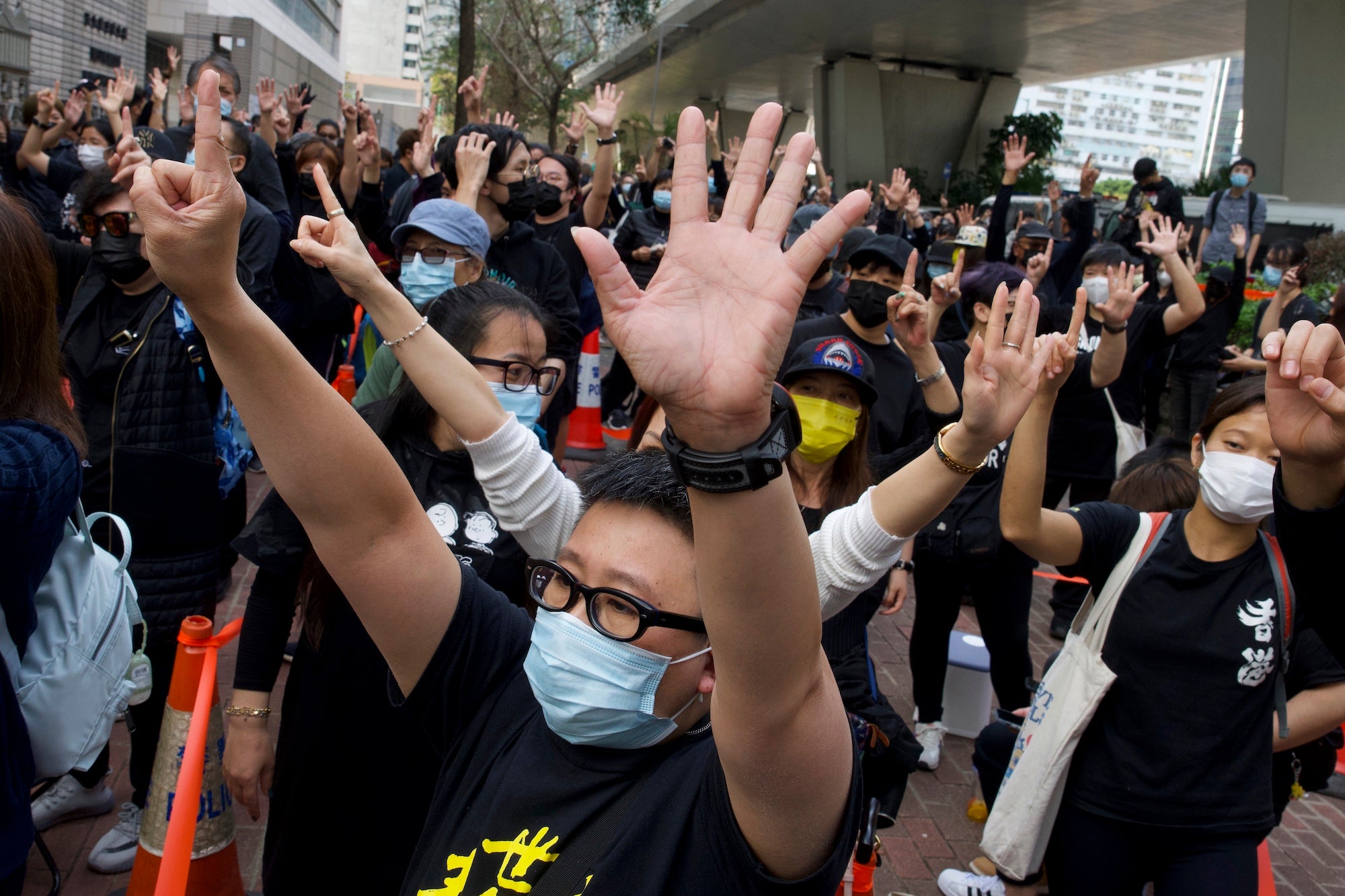 (New York) – The Hong Kong government’s use of the draconian National Security Law to charge 47 democracy figures demonstrates utter disregard for democratic political processes, Human Rights Watch said today. All were charged on February 28, 2021, for “conspiracy to commit subversion” by participating in an informal democratic primary.

Hong Kong should drop the charges against the 47, part of Beijing’s escalating campaign to end competitive elections in Hong Kong and its crackdown on the territory’s freedoms.

“The Hong Kong authorities are using the Beijing-imposed National Security Law to wrongfully charge 47 people who sought peaceful change through the democratic process,” said Maya Wang, senior China researcher at Human Rights Watch. “The Chinese government is showing Hong Kong and the world that it stands in direct opposition to human rights and democracy.”

The 47 people, ages 23 to 64, appeared in their first court hearing on March 1, where the magistrate is currently considering their bail applications. Most are or were elected government officials.

In July 2020, the 47 helped organize or ran as candidates in an informal public opinion poll to coordinate pro-democracy candidates for a Legislative Council (LegCo) election, then scheduled for September. The pro-democrats aimed to win over half of LegCo seats, with a view toward pressing Beijing and the Hong Kong governments to give universal suffrage to Hong Kong people as long promised.

Prior to the poll, Beijing and Hong Kong officials had warned that the poll amounted to “subversion”; police also raided the office of the polling institution. Despite these threats, an unprecedented number of Hong Kong people – nearly 610,000, or 15 percent of the city’s registered voters – participated.

Hong Kong prosecutors now allege that the poll was a “scheme” that amounted to “seriously interfering in, disrupting, or undermining the performance of duties and functions” of the Hong Kong government.

Subversion and other crimes established by Hong Kong’s National Security Law, imposed by the Chinese government on June 30, 2020, are overly broad and arbitrarily applied, Human Rights Watch said. They include the peaceful exercise of human rights that are enshrined in Hong Kong’s de facto constitution, the Basic Law. These rights are also protected under the International Covenant on Civil and Political Rights, which is incorporated into Hong Kong’s legal framework via the Basic Law and expressed in the Bill of Rights Ordinance.

Beginning in 2016, Beijing and Hong Kong authorities disqualified pro-democracy figures from running for seats on LegCo or unseated them after they were elected. The increasing exclusion of those who support democratic governance from LegCo and the 2019 protests prompted many aligned with that movement to run in the lower-level District Council elections in November 2019. They won by a landslide; many of those elected use their new platform to criticize the government and to galvanize support for the pro-democracy movement.

As the September 2020 LegCo elections approached – and as another pro-democracy landslide looked likely – Beijing imposed the National Security Law. On July 31, the Hong Kong government announced it would delay the September LegCo elections for a year, citing Covid-19 concerns even though the territory had effectively controlled the pandemic and other countries had held elections without problems.

The Chinese government is set to impose further drastic changes to Hong Kong’s electoral framework to ensure that only those who “love China and love Hong Kong” – euphemisms that denote loyalty to the Chinese Communist Party – can govern Hong Kong. Various proposals, such as mandating that LegCo candidates are nominated by Hong Kong’s chief executive – who is handpicked by Beijing – are reportedly being discussed. Some of these proposals are expected to be adopted by Beijing’s National People’s Congress, a rubber stamp Congress, set to convene on March 4 or 5.

The chief of Beijing’s office on Hong Kong affairs, Xia Baolong, said in a February 22 speech that Hong Kong’s executive, legislature, and judiciary must consist of “true patriots,” raising fears that Beijing will place greater pressure on the judicial system.

Concerned governments should impose coordinated targeted sanctions on officials responsible for violating the human rights of people in Hong Kong and elsewhere, as the United States began doing in July 2020, Human Rights Watch said. They should also press for appointment of a United Nations special mandate holder to monitor and report on China’s human rights developments. Legislators around the world should express solidarity with their Hong Kong counterparts.

Although the United Kingdom and the European Union have both expressed concerns about the charges brought against the 47, and both now have new human rights sanctions regimes, neither has imposed targeted sanctions on Hong Kong officials. On February 22, the European High Representative, Josep Borrell, announced that EU foreign ministers stood ready with further steps “in case of further deterioration of the situation, such as aggressive ‘reform’ of the electoral process in Hong Kong.” The European Parliament has repeatedly called for EU targeted sanctions and action at the UN.

In a statement the same day to the UN Human Rights Council, UK Foreign Secretary Dominic Raab described the National Security Law as a “clear breach of the Sino-British Joint Declaration,” and said, “free and fair elections must take place.”

“Beijing is on track to smother the remaining vestiges of democracy in Hong Kong,” Wang said. “Governments should make good on their words and take strong action, or else Beijing will conclude that its growing repression will be treated as ‘business as usual.’”