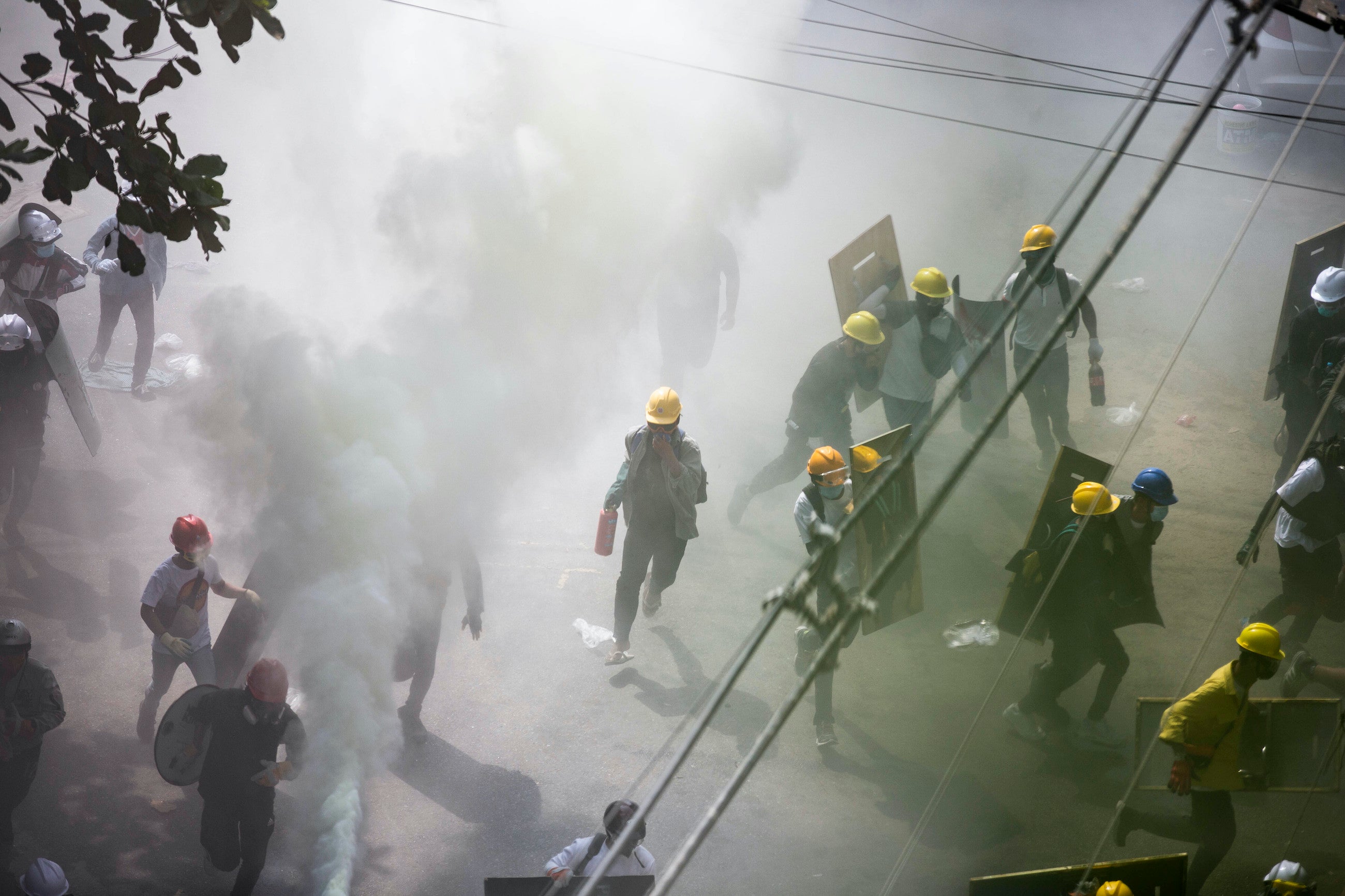 (Bangkok) – Myanmar’s military junta should order its security forces to end the use of excessive and lethal force against largely peaceful protesters, Human Rights Watch said today. On March 3, 2021, security forces fired live rounds at protesters, killing at least 38 and wounding more than 100 at demonstrations across the country, the United Nations reported.

One of the deadliest incidents took place in Myanmar’s largest city, Yangon, where security forces opened fire on largely peaceful protesters. Security forces fired on some protesters as they attempted to rescue an injured man. Earlier in the day, police detained and brutally beat medical workers. Human Rights Watch reviewed an incident in which a man in custody appears to be shot in the back.

“Myanmar’s security forces now seem intent on breaking the back of the anti-coup movement through wanton violence and sheer brutality,” said Richard Weir, crisis and conflict researcher at Human Rights Watch. “The use of lethal force against protesters rescuing others demonstrates how little the security forces fear being held to account for their actions.”

At a March 3 briefing, the United Nations special envoy on Myanmar, Christine Schraner Burgener, reported that 38 people had been killed during the day’s violence, bringing the tally of those killed since the protests began a month ago to more than 50. At least four of those killed were children, according to Save the Children.

Through the analysis of 12 videos and 15 photographs, Human Rights Watch documented three incidents in which security forces apparently used live fire against protesters along the Thudhamma Road in Yangon on March 3.

In a Facebook live video posted on March 3, Human Rights Watch identified a line of at least five military vehicles positioned on the overpass road that merges into the Airport Road near Okkala Thiri Park on Thudhamma Road. The video shows hundreds of protesters shielding and taking shelter from ongoing gunfire coming from the direction of the overpass.

Gunshots, consistent with semi-automatic and automatic weapons fire, can be heard frequently for the first five minutes of the video. At 1:35 minutes into the video, several protesters shield themselves while running toward a makeshift barrier to move an injured or deceased protester, while shots are fired at them. The video later shows an orange trash can with multiple apparent exit holes near where one of the protesters was killed. These exit holes and the direction in which people are shielding indicates that the shooting originated from the direction of stationed military vehicles.

In the videos and photographs reviewed by Human Rights Watch, no security forces were visible. In the videos, there is no indication that the protesters being fired upon are engaged in violent acts. The video does show one man at 2:05 launch a slingshot with an unknown projectile towards the center of the road.

Human Rights Watch also analyzed videos taken approximately two kilometers south of the incident described above on the Thudhamma Road of a makeshift barrier that had been set on fire. Protesters can be seen trying to extinguish the fire with water. In a Facebook live post, three people can be seen carrying a motionless man away from the direction of the blockade. Gunfire can be clearly heard in the previous minutes.

They move the man ahead of the larger group and at close range, no more than a few feet, one of the officers can be seen lowering his weapon in line with the man’s back. A shot can be heard in the video and the man instantly falls to the ground. Two security force members kick him, and getting no response, they drag him into the center of the road.

In CCTV footage released online, police officers can be seen removing three workers from an ambulance of Mon Myat Seik Htar Charity group (MMSH), then beating the workers with their guns and batons and kicking them. At least six police were involved in the attack. One of the MMSH volunteers died from their injuries, the Assistance Association for Political Prisoners (AAPP) reported.

The nongovernmental group confirmed that its members had been providing medical assistance to injured protesters in North Okkalapa. Photographs and a video of the ambulance with bullet holes and broken windows were later shared on social media. These photographs and videos match the location of the CCTV footage.

In addition to the Yangon attacks, security force killings took place over the course of the day in Monywa, Sagaing Region; Myingyan and Mandalay, Mandalay Region; Salin, Magway Region; and Mawlamyine, Mon State, based on media reports and local analysts.

The killings on March 3 followed extreme violence on February 28, in which the UN said that 18 people were killed by security forces. Witnesses described to Human Rights Watch a pattern of violence used by security forces in Yangon on March 1 and 2, including charging protesters and makeshift barricades without warning, the use of sound and stun grenades, teargas, and arbitrary detention.

Since the February 1 coup, millions of people have taken to the streets across Myanmar in largely peaceful protests to call for the military to relinquish power. In response, security forces have beaten protesters and deployed teargas, water cannons, kinetic impact projectiles, such as rubber balls, and live ammunition to disperse protesters. The use of force has been accompanied by widespread arbitrary arrests and detentions.

The authorities have detained over 1,100 government officials, activists, journalists, civil servants, and others since February 1, according to AAPP. The group reported that as many as 800 people were detained nationwide on March 3, including about 400 protesters held in Kyaikkasan Race Ground in Yangon.

The UN Basic Principles on the Use of Force and Firearms provide that law enforcement officials should “apply non-violent means before resorting to the use of force and firearms.” The UN Human Rights Committee in its General Comment No. 37 stated that “[f]irearms are not an appropriate tool for the policing of assemblies, and must never be used simply to disperse an assembly.… [A]ny use of firearms by law enforcement officials in the context of assemblies must be limited to targeted individuals in circumstances in which it is strictly necessary to confront an imminent threat of death or serious injury.”

The UN Security Council is scheduled to hold a closed-door consultation on Myanmar on March 5.

“The UN Security Council should take the dramatically deteriorating situation in Myanmar as a clarion call for coordinated action to end to this cascading human rights disaster,” Weir said. “Concern and outrage aren’t enough. What is needed is action to hold the junta accountable, including through the use of targeted sanctions and a global arms embargo.”