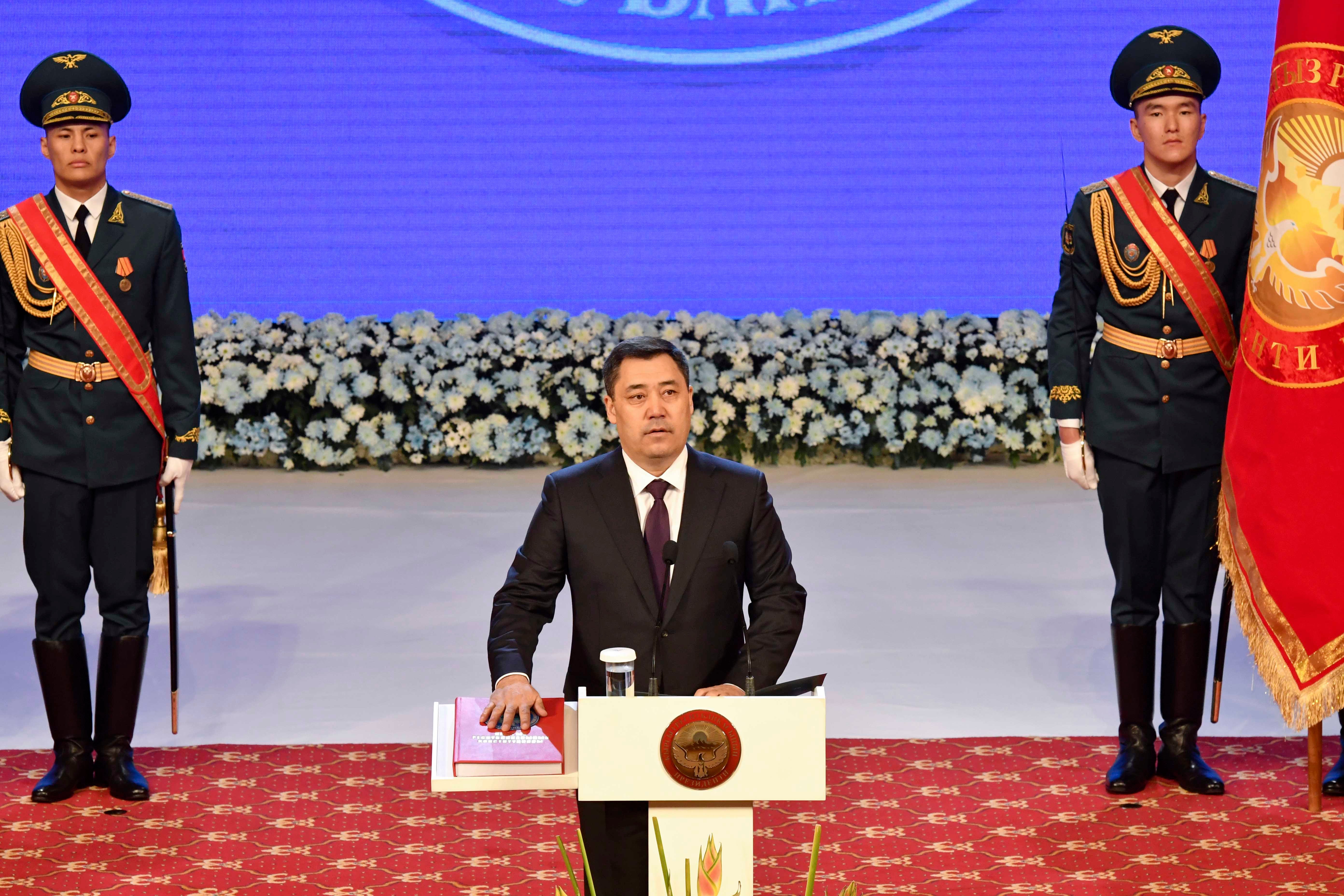 The timetable announced by President Sadyr Japarov envisages limited consultation and parliamentary debate on the draft before it is put to a national referendum on April 11.

Kyrgyzstan’s caretaker parliament should postpone consideration of the draft until after a new parliament has been elected to allow for a full deliberative and consultative constitutional reform process.

Provisions in the draft constitution regarding the role of the executive and of the legislature erode the constitution’s current system of checks and balances. Article 70 provides the president with powers previously exclusive to the parliament, such as initiating new laws and referendums, in addition to the existing power of veto.

Articles 76 to 79 make it possible for the president to indirectly recall the mandates of members of parliament, although a separate law would be needed to clarify this. If the president obtains the support of a majority of parliament members, the president can strip a member’s immunity from criminal prosecution, creating the conditions for political pressure on members who are critical of the ruling party or the president.

The draft constitution would also transfer power from the parliament to the president to appoint members of the cabinet, and appoint and dismiss judges, the prosecutor general, the chairman of the National Bank and of the Accounting Chamber, as well as nominate and dismiss half of the Central Election Committee, undermining their independence from the executive.

The constitution also grants the national kurultai – a traditional people’s council with delegates from all regions of the country – significant authority, much of which duplicates parliament’s functions. This body could also suggest removing Cabinet members and leaders of other government institutions from office. The kurultai could nominate its own representatives to the Council for Justice Affairs, which appoints judges. The kurultai would also have new authority to propose laws to the parliament. The draft does not specify how members of the kurultai are chosen.

How the country organizes its political system is a political choice to be made by the citizens. However, it is vital for decision-making by relevant institutions to be transparent and legitimate, and for the introduction of new structures, such as a people’s council, not to offer opportunities for abuse of power, Human Rights Watch said.

Article 10 would prohibit activities, public events, and dissemination of information contrary to “moral values and the public consciousness of the people of Kyrgyzstan,” ostensibly with the aim of protecting children. However, such a provision is incompatible with fundamental human rights to freedom of expression, assembly, and association. The term “public consciousness of the people” is worryingly broad and ill-defined, and open to abuse.

The draft fails to protect the right to peaceful assembly in line with international human rights norms and includes a requirement to obtain advance permission from the authorities to hold peaceful assemblies. The draft has also excluded article 38, guaranteeing freedom of identification of ethnic identity, creating a dangerous potential for ethnic profiling and discrimination against ethnic minorities.

The draft constitution includes a provision imposing unnecessary, burdensome financial reporting requirements on nongovernmental organizations, trade unions, and political parties that is incompatible with rights to freedom of association and expression.

The manner and timing of the recent constitutional reform process raises serious concerns about Kyrgyzstan’s leadership’s commitment to protecting human rights and the rule of law, Human Rights Watch said. Under the current constitution, only parliament has the right to establish a working group on modifying the constitution. Contrary to this norm, in November 2020 acting President Talant Mamytov issued a decree establishing an 89-member Constitutional Council tasked with drawing up the draft. There was no prior public discussion of candidates for the Council, who conducted all their work behind closed doors.

The draft constitution was to be made public one month prior to submission to the parliament on February 9, which did not happen, and the draft went straight to the parliament. Although the draft is now open to public comments and suggestions by phone, mail, or email until March 9, this is by no means a full public consultation that would involve consideration of opinions of numerous stakeholders from rural and urban areas.

Human Rights Watch is not aware of any arrangements for the results of the comment period to be made public or for provisions for parliament to change the draft while it goes through the necessary three parliamentary readings. After the readings, votes of at least 80 members of parliament, a two-thirds majority, are required to adopt the draft before it is put to vote by referendum.

The Kyrgyz authorities should ensure that citizens and experts alike are consulted fully in a deliberative process. The government should also refer the draft constitution to the European Commission for Democracy through Law, also known as the Venice Commission, Human Rights Watch said.

A November 2020 Urgent Amicus Curiae brief from the Venice Commission says that Kyrgyzstan’s current caretaker parliament does not have the legitimacy to initiate far-reaching constitutional amendments, especially in a way contrary to the process provided for in the current constitution. The current parliament’s role is to discharge essential governance functions in line with the rule of law until the will of the people can be expressed in a free and fair election, which has not yet been scheduled. President Japarov has said in an interview that the parliamentary election will be held in the fall.

Multiple rights groups and others have expressed concern and criticism of the draft constitution, including Legal Clinic Adilet, Community of Lawyers, Media Policy Institute, and Bir Duino. They all have recommended postponing the constitutional referendum to allow adequate time for revisions to the draft to ensure it complies with human rights standards.

Kyrgyzstan’s international partners, in particular the European Union, its member states, the US, and the UK, should publicly urge the Kyrgyz government to seek international expert advice on the draft constitution from the Venice Commission, to comply with procedures regarding the adoption of the new constitution in line with national and international norms.

“President Japarov has pledged to uphold and respect human rights,” Sultanalieva said. “A new constitution lays the foundation for these actions, so it is vitally important for this document, and the process of preparing it, to uphold beyond all doubt the highest standards of human rights and the rule of law. It is in his government’s interest for this to take place.”