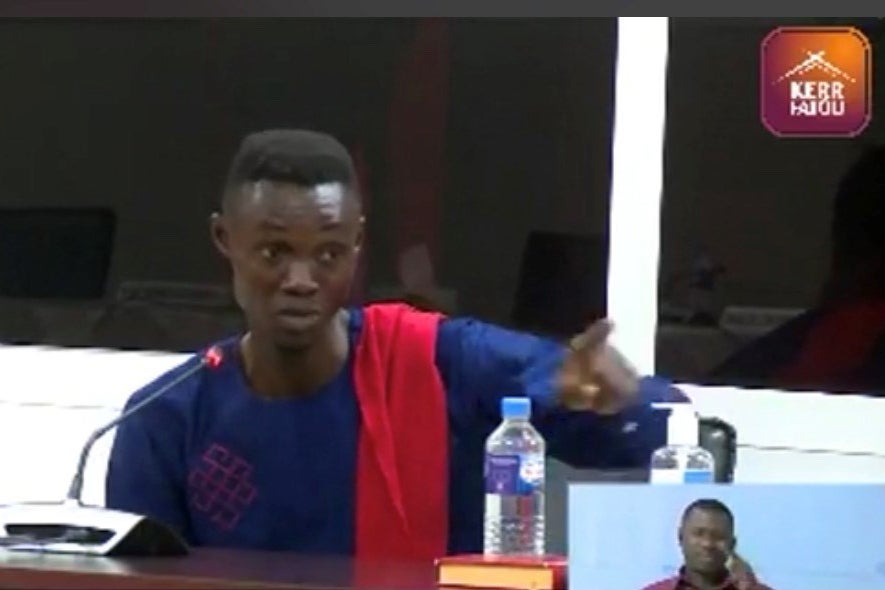 From February 24 to March 11, 2021, witnesses told the Gambia Truth, Reconciliation and Reparations Commission (TRRC) that migrants bound for Europe from Congo, Cote d’Ivoire, Ghana, Liberia, Nigeria, Senegal, Sierra Leone, and Togo, plus their Gambian contact, were held by Jammeh’s top lieutenants in the security services before being murdered by the “Junglers,” a notorious paramilitary unit that took its orders directly from Jammeh.

“Well-placed witnesses have implicated Yahya Jammeh in killing citizens from nine West African countries,” said Reed Brody, senior counsel at Human Rights Watch. “All those countries should support a criminal investigation and, if warranted, the prosecution of Jammeh and others who bear the greatest responsibility for the massacre of the migrants and other serious crimes by his government.”

Witnesses, including the former chief of defense staff and former senior officers of Gambia’s National Intelligence Agency (NIA), testified that then-police chief Ousman Sonko – who is currently under investigation in Switzerland on charges of crimes against humanity – informed Jammeh during a national ceremony on July 22, 2005, that a large group had been apprehended on a beach near Barra, across the river from Banjul, the capital.

After allegedly speaking with Jammeh, Sonko instructed officers to ferry the migrants, who were suspected of being mercenaries,to naval headquarters in Banjul. All the Gambian security service chiefs – from the police, army, navy, NIA, and national guard – then converged on naval headquarters, as did several Junglers, who beat and kicked the migrants and, one officer testified, “treated them like animals.”

Several officers said that it was already clear that the men and two women were migrants and not mercenaries, as they carried no weapons or anything suspicious. The migrants were then distributed to various detention centers around Banjul.

The exposed bodies of the first group of eight migrants were found the next morning, July 23, 2005, near “Ghana Town,” a settlement of Ghanaian descendants in Brufut, just outside Banjul. Pa Amady Jallow, then-crime management coordinator, testified that the bodies showed signs of bad beatings, their skulls broken in, blood and brains oozing out. Jallow said that when he reported this information to the police chief, Sonko, he was uninterested, and three times hung up the phone on him before Sonko’s deputy informed Jallow that he was immediately being transferred to traffic duties.

Jallow told the commission that his offense was “trying to investigate a heinous and barbaric crime perpetrated … in the name of … the president.” Jallow also said he was informed years later by another police officer that an additional nine Nigerians had been buried in a mass grave near where Jallow saw the exposed bodies. The commission has said that it intends to search that site.

Ismaila Jagne, the community leader of Ghana Town, testified that two Ghanaians who sought refuge there on July 23 explained that they had been transported nearby, with eight others, by soldiers in black uniforms (as worn by the Junglers) but were able to escape while the remaining others were being taken away two by two. Jagne brought the two Ghanaians to the police in Brufut for their security. When Jagne returned to bring the men food, the officers told him the two men had been removed. An August 2005 Ghanaian delegation led by then-foreign minister, and current president, Nana Addo Dankwa Akufo-Addo, reported that Brufut records showed that the men were transferred on July 24 to police headquarters. The two men, identified as Bright Antwi and John Kweku, are among those missing.

Some days later, the remaining migrants still in custody, about 40-45, were taken in vehicles and executed in Senegal, just across the border from Jammeh’s hometown of Kanilai. In a July 2019 truth commission session focused on the Junglers, three former Junglers, all serving members of the Gambian National Army, testified that they and 12 other Junglers whom they listed had carried out those killings on Jammeh’s orders. One of the officers, Omar Jallow, recalled that the operation’s leader told the men that “the order from … Jammeh is they are all to be executed.”

Junglers and other witnesses testified that the Junglers were under the direct control of Jammeh, listed a series of assassinations carried out by the Junglers on Jammeh’s orders, and said, in the words of a former Jungler, Alieu Jeng, that the Junglers “never operated on anything that is their own orders or will, all the orders come from the top [Jammeh].”

Former Interior Minister Baboucarr Jatta accepted the assertion by the TRRC lead counsel, Essa Faal, that the killings were a “state-ordered execution by soldiers from the State House [Jammeh’s residence]” and said that he believed the soldiers were acting under Jammeh’s orders.

The exact number of migrants killed is still unclear. Gibril Ngorr Secka, director of operations at the NIA, presented the commission with a list of 51 migrants the police counted at one station, including nationals of Ghana (39), Sierra Leone (3), Côte d'Ivoire (2), Senegal (2), Togo (2), Liberia (1), Nigeria (1), and Congo (1). While that number omits some migrants who have previously been identified, as well as about eight other Nigerians believed to have been arrested and killed, it is the first official list of the migrants to be seen.

TRRC testimony also described the Jammeh government’s persistent efforts to cover up the crime, first to stymie Ghana’s attempt to learn the truth. The former foreign minister Lamin Kaba Bajo agreed that a letter he sent to his Ghanaian counterpart Nana Akufo-Addo in December 2005, calling the story of the sole massacre survivor Martin Kyere a “fabrication” and saying that the migrants had probably “escaped to Senegal” was a “cock and bull story.” Bajo said that at the time he had no knowledge of the truth of the letter’s contents which had been taken from a ministry of interior report. He said that it was “impossible” that such a fabrication could have happened without Jammeh’s knowledge.

The cover-up kicked into high gear in advance of a 2008 investigative mission by the United Nations and the Economic Community of West African States (ECOWAS) when the government appointed a “task force” that included several cabinet ministers to deal with the investigators.

Former Chief of Defense Staff Assan Sarr, who had also been at naval headquarters, said that when a UN/ECOWAS investigation team came in 2008, he was told by then-police chief Ensa Bajie in the presence of the then-crime management coordinator, Yankuba Sonko, Gambia’s current interior minister, not to “jeopardize or tarnish the image of this country … and in the event they call us, we should be mindful of what we say or do.”

A police officer from Barra, Babucarr Bah, said that Yankuba Sonko told him, “make sure you don't say anything” to the investigators and that on Sonko’s instructions, “we took them to bars, gave them alcohol, and women.” Sonko denied this allegation in his own testimony. Bah also said that around December 2005, Ousman Sonko, the former police chief, told him to falsify the July 22, 2005 diary entry from the Barra police station where the migrants were initially arrested and that the diary entries were then completely rewritten. Copies of the diary with the entry for July 22 removed were presented to the truth commission.

The TRRC testimony corroborates the findings of a 2018 report by Human Rights Watch and TRIAL International, who interviewed 30 former Gambian officials, including many of the commission’s witnesses.

“Now that the information we had gathered has been corroborated, it’s all the more important for Jammeh to be called to face up to his responsibilities,” said Emeline Escafit of TRIAL International. “The time has now come to deliver justice for the victims and their families.”

The recent testimony casts further doubt on the UN/ECOWAS report that was said to have concluded that the Gambian government was not “directly or indirectly complicit” in the deaths and enforced disappearances. It blamed “rogue” elements in Gambia’s security services “acting on their own” for the massacre. The UN/ECOWAS report has never been made public, however, despite repeated requests by the victims and by five UN human rights experts.

Victims who testified before the truth commission at the current session included Martin Kyere from Ghana, the sole known survivor of the killings along the Gambia-Senegal border, who jumped into the forest from a moving truck carrying other detained migrants; Adama Conteh, the widow of the Gambian victim Lamin Tunkara; and Kehinde Enagameh of Nigeria, whose brother, Paul Omozemoje Enagameh, was among those killed, according to a Nigerian investigation.

Eric Nana Yaw Ansah Owusu, also of Ghana, testified that he was arrested with the migrants but held in detention separately for 11 months. Owusu alleged that just after his arrest, a Gambian police officer applied electricity to his genitals, seeking a confession that the group were mercenaries.

Since it began hearings in January 2019, the Gambian truth commission has also heard testimony that Jammeh participated in the rape and sexual assault of women brought to him, forced HIV-positive Gambians to give up their medicine and put themselves in his personal care, and was responsible for ordering the killing and torture of political opponents and “witch hunts“ in which hundreds of women were arbitrarily detained. Jammeh has lived in exile in Equatorial Guinea since his departure from Gambia in January 2017.

The commission is tasked with the “identification and recommendation for prosecution of persons who bear the greatest responsibility for human rights violations and abuses.” It is expected to deliver its report in July. The Gambian government will then decide how to respond to the recommendations.