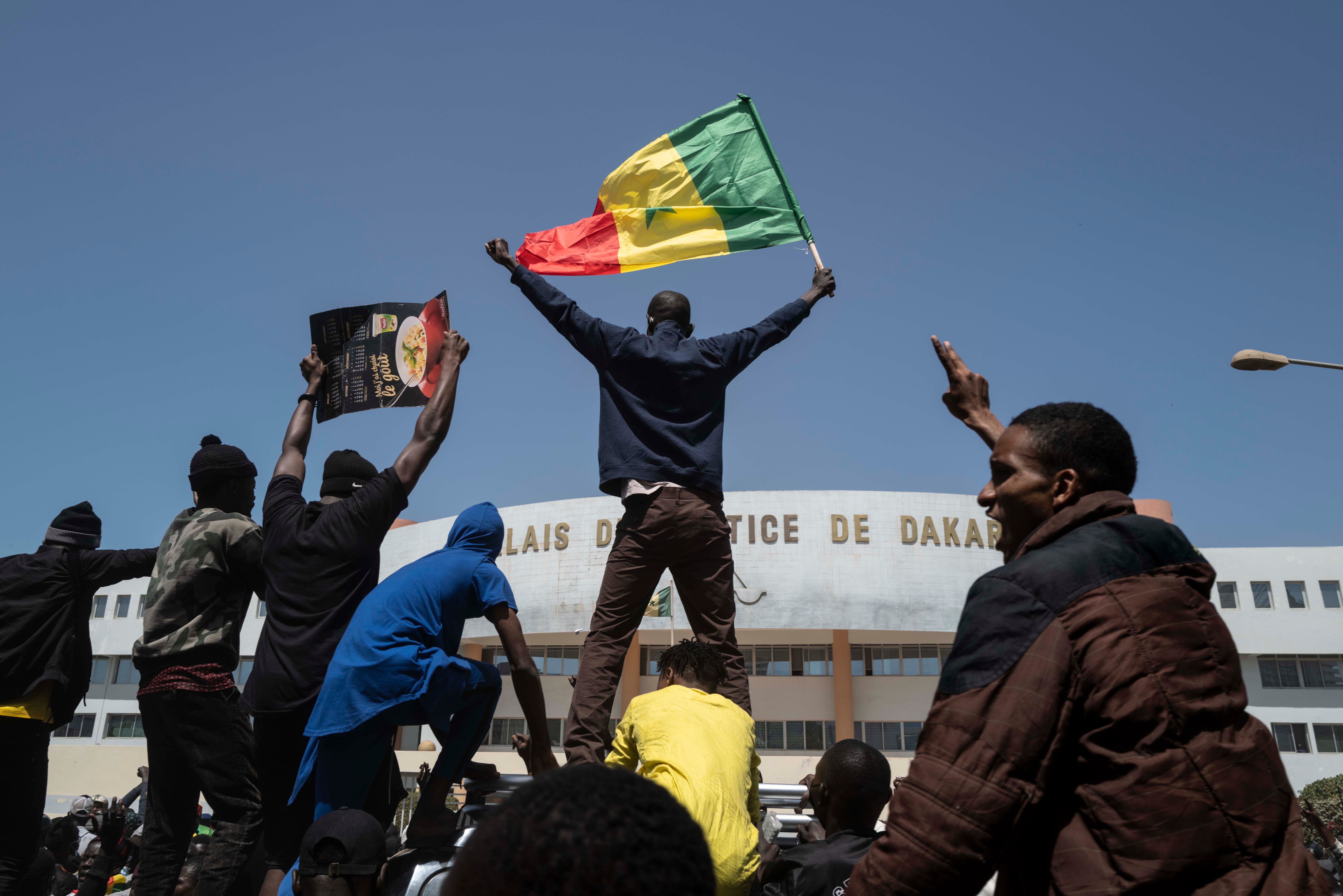 (Nairobi) – Senegalese authorities should immediately ensure an independent and thorough investigation into the reported deaths of at least 10 people and injuries of hundreds of others during protests across the country since March 3, 2021, Human Rights Watch said today. The government should release those held because of their political beliefs or participation in peaceful activities.

Demonstrations broke out across Senegal following the arrest on March 3 of a prominent opposition leader, Ousmane Sonko, head of the political party Patriots of Senegal for Work, Ethics, and Fraternity (PASTEF), in the capital, Dakar. Based on Human Rights Watch interviews with eight activists, protesters, and journalists, and reporting by media outlets and national and international rights groups, security forces fired teargas and, in some cases, live bullets to disperse the protests and rounded up at least 100 people for arrest. Many protesters responded by throwing rocks at the security forces, looting, and burning tires, cars, and other property. But other protests were reported to be peaceful.

“As Senegal is witnessing its worst unrest in years and with more protests planned, the authorities should ensure that security forces respect the law,” said Ida Sawyer, deputy Africa director at Human Rights Watch. “The recent deaths and injuries of protesters should be credibly investigated, and security force members responsible for unlawful or excessive use of force should be held to account.”

The protests began on March 3 as Sonko headed to court in Dakar for a hearing to respond to a rape accusation, an allegation that he denies, saying it is politically motivated. Police stopped Sonko’s convoy en route and arrested him. He was charged with disturbing public order and participating in an illegal demonstration. Sonko was held at the gendarmerie base in Dakar’s Colobane neighborhood, then released on March 8 under judicial supervision.

Sonko’s court hearing and subsequent arrest sparked the demonstrations in Dakar and other cities including Bignona, Thies, and Zinghinchor. But many people took to the streets to express other grievances, including the increasing lack of jobs, especially for youth, and a general deterioration of the economy because of the Covid-19 pandemic and related restrictions.

Some protesters also said they were increasingly frustrated by the lack of progress on democratic reforms. They viewed Sonko’s arrest as a move to eliminate the political opposition, given that other political opponents, including Karim Wade and Khalifa Sall, had already been arrested and sidelined.

In a speech on March 5, Interior Minister Antoine Félix Abdoulaye Diome said the protests were “acts of terror,” “insurrection,” “vandalism,” and “banditry” and were illegal due to the state of emergency for the Covid-19 pandemic. A government source told Radio France Internationale (RFI) on March 11 that 10 people had died during the protests.

Amnesty International documented the deaths of at least 8 people during the demonstrations, some “caused by the use of excessive force and firearms by security forces.” Senegal’s Red Cross reported that 6 people died and at least 590 were injured, including 232 who were transferred to health centers for treatment. Opposition groups have reported that 11 people died.

Media reported that protesters looted food from several supermarkets across the country, and the French supermarket chain Auchan said at least 14 of its stores have been attacked. “People are going hungry and are angry,” a Senegalese journalist told Human Rights Watch. “What we have seen in the past week are riots triggered by both growing poverty and dissatisfaction with perceived political and judicial injustices.”

At least 100 people were reportedly arrested during the protests, some of whom were beaten, according to national and international rights groups.

Cyrille Touré, known as “Thiat,” a rapper and founding member of the citizens movement Y’en a Marre (“Fed Up” in French), told Human Rights Watch that he was with a large crowd of protesters in Dakar at about 4 p.m. on March 5 when the police suddenly started firing blank bullets at the crowd.

“I stopped there, sat on the ground and put my hands on my head,” he said. “Then the police came toward me and started to beat me with their guns – on my head, my back, my side, my feet …Then they put me in their pick-up truck and drove me around as they continued to fire teargas and blank bullets at protesters.” Touré was eventually taken to a gendarmerie brigade, where he was held in a crowded, dirty cell with 16 other protesters until his release on March 8. “My head still hurts, and I have marks all over my body from where they beat me,” he said.

Nationwide internet disruptions were reported for much of the day on March 5, making it difficult for national and international journalists, human rights activists, and other people to communicate, get information, or report on unfolding events. On March 5, the National Audiovisual Regulatory Council, the Senegalese media regulatory body, suspended two television channels, Sen TV and Walf TV, for 72 hours, accusing them of broadcasting images of the protests. Media reported that violent protesters attacked the premises of two media outlets deemed to be pro-government, the newspaper Le Soleil and the RFM radio station in Dakar.

International and African human rights law and the Senegalese constitution protect the right to freedom of assembly and expression and prohibit the excessive use of force by law enforcement officials. The United Nations Basic Principles on the Use of Force and Firearms provide that law enforcement officials may use force only in proportion to the seriousness of the offense, and that the intentional use of lethal force is permitted only when strictly unavoidable to protect life. International human rights standards also require internet-based restrictions to be both necessary and proportionate. The United Nations Human Rights Council has condemned internet shutdowns by governments and stated that human rights apply online just as they do offline.

“Freedom of expression is a fundamental value and right enshrined in our constitution,” Alioune Tine, a prominent Senegalese human rights activist and founder of the think tank AfrikaJom, told Human Rights Watch. “Its restriction also explains the explosion of unprecedented violence in Senegal.”

In response to the protests, the special representative of the Secretary-General and head of the United Nations Office for West Africa and the Sahel (UNOWAS), Mohamed Ibn Chambas, called on security forces “to ensure the safety of demonstrators and property in a professional and lawful manner.” The spokesperson for the UN Secretary-General said that “protests must remain peaceful,” and security forces “must at all times operate… in line with international human rights standards.” In a statement on March 6, the Economic Community of West African States (ECOWAS), a regional bloc, condemned the violence, called on all parties to exercise restraint, and urged authorities to ease tensions and guarantee freedom of assembly.

Senegal’s President Macky Sall addressed the nation in a televised speech on March 8. He called for “calm” and for people to “avoid the logic of confrontation that leads to the worst.” He offered his condolences to the families of those who died during the protests but did not say that an investigation would be opened to establish the circumstances of their deaths.

“We want the president to announce that there will be reparations for families of victims,” Fadel Barro, an activist and founding member of Y’en a Marre, told Human Rights Watch, referring to those killed during recent protests and previous crackdowns on protesters. “We ask for an independent commission of inquiry for all the deaths, particularly those which occurred when demonstrations were repressed.”

The Movement to Defend Democracy (M2D), a group of opposition parties, including PASTEF, and civil society activists, have called for a national day of mourning on March 12 and more demonstrations on March 13.

“The recent protests that have rocked Senegal show the growing frustrations among the country’s youth around poverty, the pandemic, and what many perceive as the government’s failure to live up to its promises,” Sawyer said. “Instead of cracking down on peaceful protesters, the authorities should work to address their concerns, including by advancing democratic governance and the rule of law and protecting basic economic rights for everyone.”