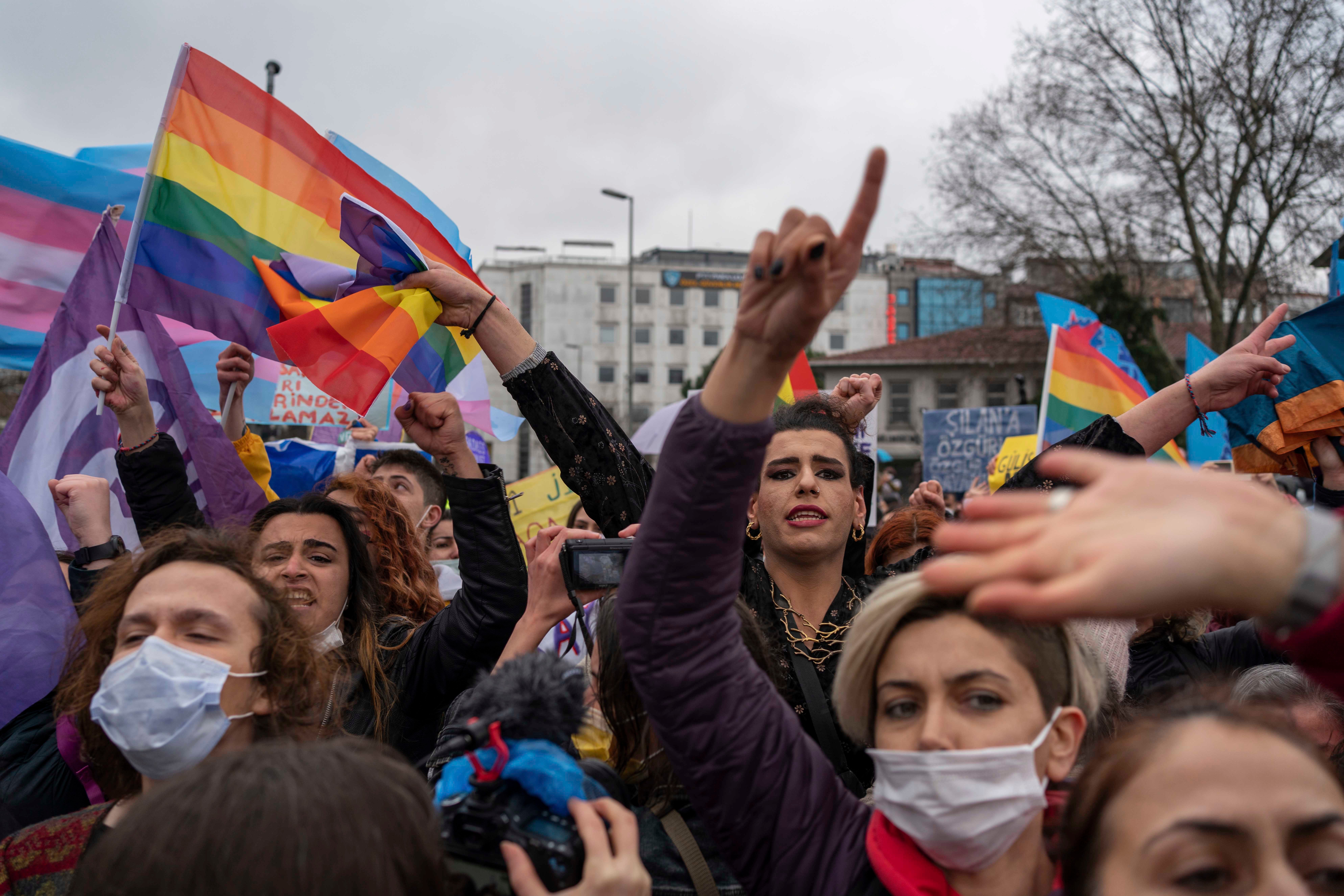 (Istanbul) – Turkish authorities should immediately put a stop to the criminal investigation opened into women’s rights activists for shouting slogans at a March 8, 2021 International Women’s Day assembly in central Istanbul and ensure that judicial control measures imposed on them are removed, Human Rights Watch said today. The women are under investigation for “insulting” President Recep Tayyip Erdoğan, a criminal offense in Turkish law punishable with a one to four-year prison sentence that violates international standards on freedom of expression.

In an operation ordered by the Istanbul prosecutor’s office against 18 women’s rights activists, the Istanbul police detained 13 of them, including a 17-year-old child, late on the night of March 10. The five others presented themselves to the prosecutor the next day. On March 11, an Istanbul court imposed travel bans on 17 women, and additional judicial control orders on five activists including the child, requiring them to sign in at a police station on a regular basis until further notice.

“Opening criminal investigations against women’s rights activists for nonviolent slogans, and taking them from their homes in the middle of the night, demonstrates the Turkish authorities’ profound disdain for freedom of assembly and speech, and of course women’s rights,” said Hillary Margolis, senior women’s rights researcher at Human Rights Watch. “It speaks volumes that even on a day to celebrate women and promote equality, Turkish authorities would rather target them for peaceful demonstrations than protect their rights.”

Indeed, the arrests come just a week after the government announced a new Human Rights Action Plan in which it pledged to protect and uphold freedom of speech and assembly as well as to end police detention “out of working hours” in which the purpose is purely to bring people in to give a statement to the prosecutor.

Human Rights Watch has seen police interrogation reports that identify the phrase “Tayyip, run, run, run, women are coming,” addressing the Turkish president, as criminally offensive. The reports list some activists’ “rhythmic jumps” during the March 8 demonstration as proof that they were participating in shouting slogans. In one interrogation report, police asked an activist why she was chanting that slogan. In another question, police asked how and why women learned of the annual march, a tradition for the last 19 years, and who they went with. Activists’ lawyers said police asked their clients during their interrogation about social media accounts under their names and whether the accounts belonged to them.

The women’s rights movement in Turkey is one of the strongest parts of civil society in the heavily polarized country and it is deeply critical of government policies on gender. Government officials have engaged in several controversial debates over Turkey possibly withdrawing from the Council of Europe’s Convention on Preventing and Combating Violence Against Women and Domestic Violence, better known as the Istanbul Convention.

The government has invoked a conservative view of gender roles and sought to sideline the oppositional voices of activists supporting implementation of the convention. These debates have continued while there has been a surge in domestic violence during the Covid-19 pandemic and despite evidence that in Turkey every year hundreds of women are killed by current or former male partners, and that those who experience violence face significant barriers to getting help or overcoming impunity for the abusers.

The Turkish authorities seriously restricted access to the annual International Women’s Day evening assembly in central Istanbul on March 8, deploying hundreds of police, and putting that part of the city under lockdown. Even though there was no official ban and thousands of determined women found ways to join the march, the heavy security demonstrated how the right to assembly is so often unjustifiably curtailed in Turkey.

Officials this year also seemed particularly nettled by the participation of lesbian, gay, bisexual, and transgender (LGBT) people in the International Women’s Day events. In at least three cities, activists reported police preventing people from bringing rainbow-colored objects, LGBT flags or banners to demonstrations, and attempting to stop trans women joining assemblies. At a daytime assembly on March 6 in Istanbul, police violently detained five trans women along with four other women who tried to stop the detentions. An Istanbul court placed two of the trans women under house arrest and released the seven other women subject to travel bans and judicial control on the grounds that they had resisted police orders.

The Turkish authorities’ anti-LGBT stance during the women’s day events is the latest escalation in a campaign dating back to 2014 in which officials have restricted LGBT people’s right to assembly and taken an increasingly hateful tone toward them. Anti-LGBT policy has become a polarizing tool for the Turkish government in its crackdown on opposition voices.

In February, an appointed rector closed down a prestigious university’s LGBT club after weeks of protests, and government officials called students arrested for an anonymous artwork with LGBT flags “perverts.” A year ago, the head of Turkey’s Religious Affairs Directorate gave a homophobic sermon while speaking about the Covid-19 pandemic. For the last two years, university students have faced trial for participating in a campus Pride March in 2019.

“Women, children, and LGBT people have the right to take part in women’s day celebrations – just as they should be able to exercise all their rights. Turkey should end the repression and let their voices be heard,” Margolis said.