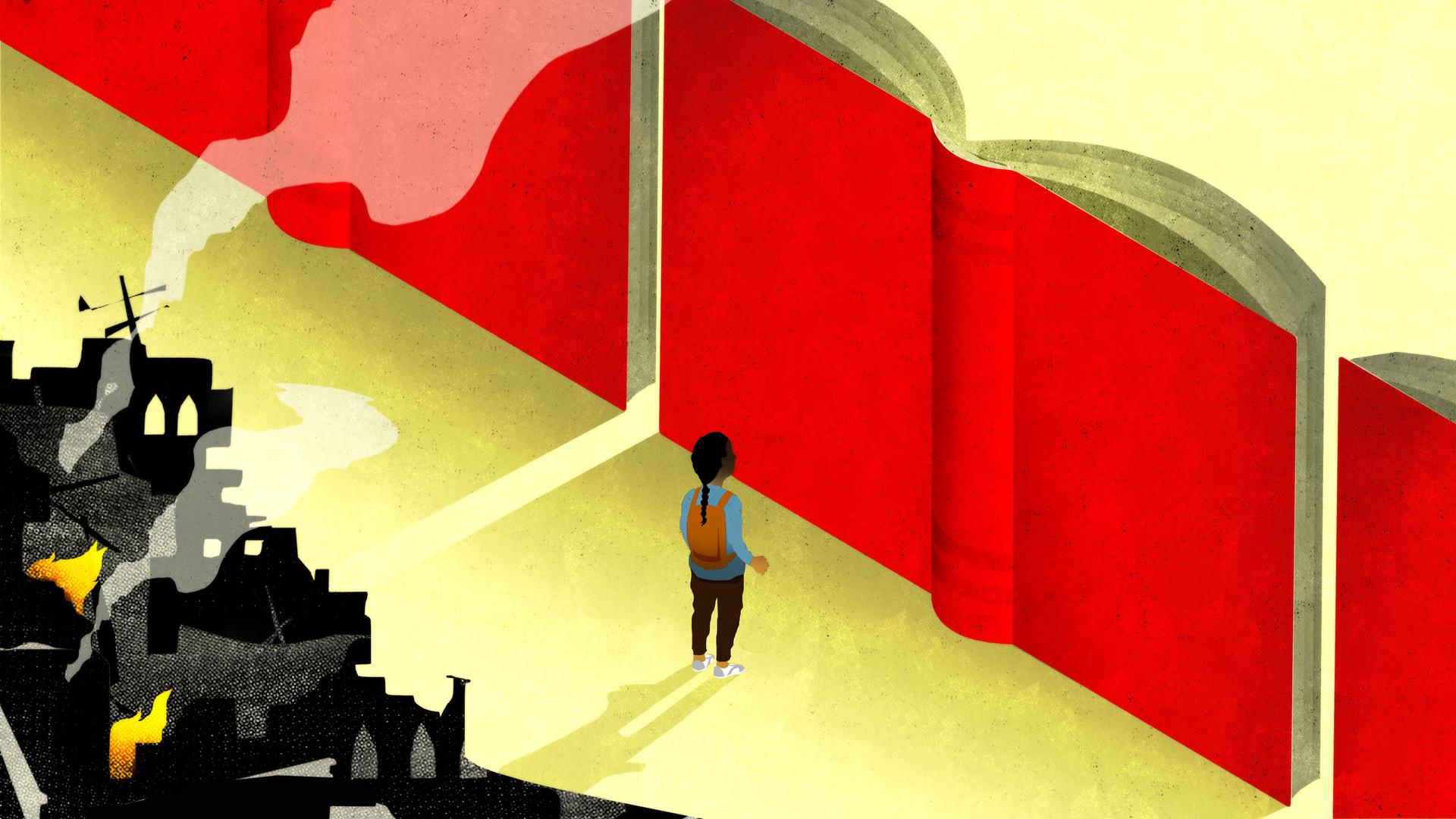 (Brussels) – Governments should address the unprecedented education crisis facing Syrian refugee children in Lebanon at the March 30, 2021, ministerial conference in Brussels on Supporting Syria and the Region, Human Rights Watch said today. Donors should press the Lebanese government to lift barriers to education, including restrictions on humanitarian groups providing education.

School closures and the financial downturn caused by the Covid pandemic have harmed Syrian refugee children’s education in all the refugee-hosting countries supported by the Brussels conference, including Turkey, Jordan, Iraq, and Egypt, but in Lebanon learning is in free-fall. The financial, political, and Covid-related crises gripping Lebanon have pushed hundreds of thousands of Syrians and Lebanese deeper into poverty, heightening risks of dropouts, child labor, and child marriage.

“After years of donors’ promises to support quality education for all Syrian refugee children, the majority of Syrian children in Lebanon are getting nothing, the government’s plan is a mystery, and it is tying humanitarian groups’ hands with red tape and inexcusable obstacles,” said Lotte Leicht, EU director at Human Rights Watch. “The Brussels conference donors need to confront this scandalous situation and insist on maximum access to education and accountability for harmful restrictions.”

During the 2018-2019 school year, only 42 percent of the 660,000 school-age Syrian children in Lebanon were in school, including 9 percent in private schools. Access to education deteriorated even further during the 2019-2020 school year after schools closed amid widespread strikes and protests against government corruption in October 2019. Many Syrian children returned to school, if at all, only in early 2020, but were in class for a short amount of time before schools were closed again due to Covid-19 on February 29. The Education Ministry announced a shift to distance learning in March 2020 and said it would publish a distance learning strategy in August, but has not yet done so. Nor has it set out clear plans for school re-openings, education staff at humanitarian organizations said.

About 190,000 Syrian children in Lebanon enrolled in public schools in the 2020-2021 school year, while another 25,000 who should have re-enrolled or entered grade 1 did not, Education Ministry officials have said in meetings with groups involved with education. All children in Lebanon have missed more than a year of classes since September 2019 due to school closures, but most Syrian children are assigned to attend special “second shift classes” in the afternoon, and have received almost no education whatsoever due to a failure by schools to provide them with distance learning, these groups told Human Rights Watch.

Donors should press the Education Ministry to urgently lift unreasonable restrictions on enrolling in public schools and bans on what humanitarian groups are allowed to teach, Human Rights Watch said.

Many refugee children cannot attend public schools, in many cases because their families cannot afford transportation or because public schools had refused to enroll them – as 29 percent of 443 children surveyed in 2019 reported. Schools are refusing to let Syrian children take mandatory examinations if they do not have legal residency in Lebanon, which is required beginning at age 15 but which 70 percent of Syrians cannot afford or qualify for.

Humanitarian groups operate non-formal schools near refugee communities and can reach large numbers of children, but the Education Ministry prohibits these groups from teaching the normal school curriculum. The ministry allows humanitarian groups to teach basic numeracy and literacy, and early childhood education, but has not approved any non-formal education program for children ages 7 to 9, on the basis that these children should enroll in public schools.

The Education Ministry has not allowed out-of-school Syrian students to enroll in schools, though, unless they complete a donor-funded special accelerated learning program that helps them catch up to their in-school peers. But the ministry has not offered the program for the last two years, did not provide any distance learning option to the 6,500 students who had been enrolled, and does not allow nongovernmental groups to teach it.

During the 2020-21 school year, the ministry informed groups involved with education that children could enroll in public schools if they complete a basic numeracy and literacy course and pass placement tests. Donors should press the ministry to let aid groups teach the accelerated curriculum and to support all children’s education without preconditions on enrollment.

During the summer of 2020, the Education Ministry shut down nine unlicensed private schools attended by 5,000 Syrian students, but only provided spaces at public schools for 800 of the students. Two humanitarian groups paid for 3,000 children to enroll in private schools, but 1,200 students were still left out. Before the financial crisis, 70 percent of Lebanese children were enrolled in private schools, but in 2020-21 almost 40,000 Lebanese children transferred to public schools, leaving fewer spaces for Syrian children.

Donors pay Lebanon a set amount per Syrian refugee child enrolled in school, and also pay school fees for Lebanese children, at a cost of more than $440 million from 2015-16 to 2018-19. Donors also fund humanitarian groups providing non-formal education to refugee children. But humanitarian funding to Lebanon has fallen at each Brussels conference, from $1.3 billion in 2017 to $944 million in 2020.

Participants should reverse that trend and deliver on their pledges to provide adequate funding to fulfill Syrian children’s right to education. Donors’ reporting on funding is often unclear. Overall education aid at the Brussels conference fell from 24 percent of the total funding in 2018 to 9 percent in 2019 and 2020. Despite dismal enrollment figures, the Education Ministry has previously refused to run back-to-school campaigns to promote enrollment, citing a lack of funding.

In order for education funding to reach students and teachers, conference participants should follow the lead of the EU, World Bank, and UN, and insist that Lebanese authorities should disburse the aid funding in US dollars. Foreign governments transfer donations to Lebanon, including funds to pay for second-shift teachers’ salaries, in US dollars. However, the funds were deposited in banks that insisted on disbursing the aid in Lebanese lira at a rate well below the market rate.

Banks thus claimed most of the value of the donations because the real value of Lebanese currency has now plummeted by 90 percent. Some Lebanese teachers have gone on strike to demand payment in dollars as the value of their wages collapsed. In addition, school directors refused to re-open 80 of the “second shift” schools this school year because the Education Ministry has not paid them for the months when schools were closed during the 2019-20 year.

Donors should require the Education Ministry to publish regularly the data from an education information management system, which donors funded, that tracks attendance and enrollment. The ministry has not done so since September 2019. An investigative report by Al-Jadeed television during the 2019-2020 school year found that the actual attendance of Syrian children in second shift classes was 23 percent lower than the number enrolled.

Lack of Learning During School Closures

Education officers at humanitarian groups said there was a lack of government support for teachers to create online lessons and little monitoring of the quality of education provided for both Lebanese and Syrian children. One primary school reportedly provided no online learning other than sending students a link to one YouTube video each week. Teachers said that the ministry did not provide them with laptops or reimburse them for their mobile data usage. In 2018, donors funded the UN to purchase laptops for public schools, but those were never distributed. The importing company falsely claimed that 2,335 of the laptops had been destroyed in the Beirut port explosion and instead sold them to private buyers.

Teachers and students received free access to the Microsoft’s Teams platform, but in practice, very few second-shift classes provided any online material for Syrian refugee children, staff at humanitarian organizations providing education told Human Rights Watch. Poor internet access, the unaffordable cost of data, and the lack of any devices other than a parent’s smartphone also limited Syrian children’s online access. Teachers most often used WhatsApp to send assignments and voice messages to children, education workers said. Televised classes were broadcast for Grade 9 and Grade 12, but only half of Syrian refugee families have a television, and most Syrian children drop out before secondary school, with fewer than 1 percent completing grade 9.

“Children have a right to education and cannot afford a repeat of last year’s Brussels conference on Syria, when organizers failed even to list education on the official agenda,” Leicht said. “Donors should keep their promises that there should be no lost generation and fund quality education for all, and use their leverage to ensure their aid actually reaches Syrian refugee children in need.”