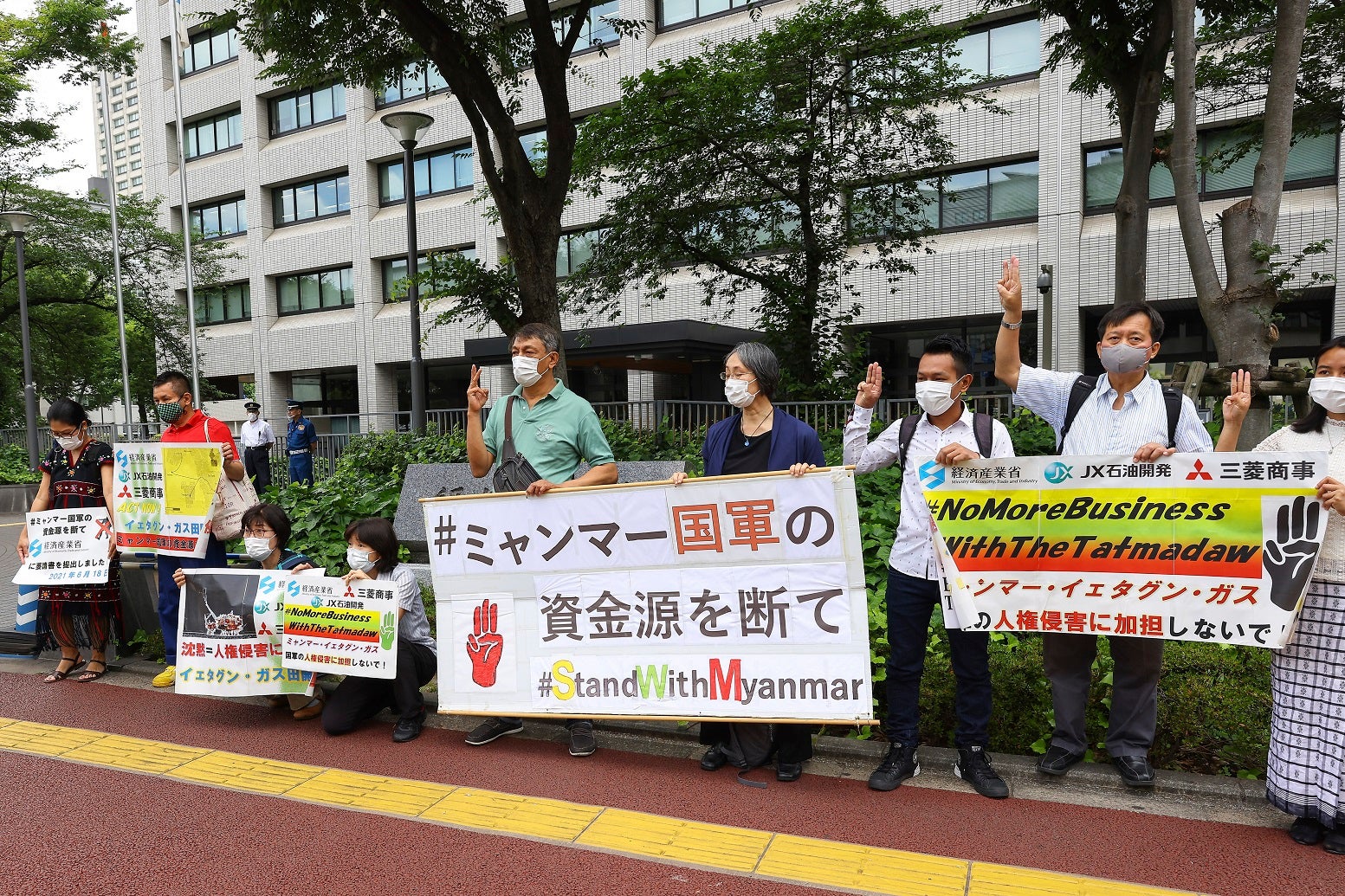 One participating company, Tokyo Tatemono, stated that they have suspended operation of the Y-Complex project since the coup. However, project participants, including publicly-funded Japan Bank for International Cooperation (JBIC), Japan Overseas Infrastructure Investment Corporation for Transport and Urban Development (JOIN), Fujita Corporation, and Tokyo Tatemono, have not publicly disclosed the duration of the suspension or the conditions for resuming operations.

“The Japanese government and businesses failed to appropriately assess the risk associated with doing business in Myanmar,” said Ryutaro Ogawa, Vice Secretary General at Human Rights Now. “They should admit their own shortcomings and act responsibly, otherwise, they will risk financing the military.”

The Y-Complex, which includes a shopping mall, hotel, and office rental space, is being built on “military-owned Military Museum land” leased by Myanmar’s Quartermaster General’s office, according to a copy of the “Build, Operate, Transfer (B.O.T) Land Lease Agreement” dated October 15, 2013. The agreement states that upon termination or expiry of the B.O.T agreement, the land, including buildings and fixtures, developed on the land should be transferred to the “lessor.” Therefore, companies involved in Y-Complex risk creating immoveable long-term assets for the military, which can continue to yield income after the agreement is terminated. On June 22, 2020, a Myanmar military spokesperson confirmed that the military owns the land, and the Ministry of Defense receives rental payments for the Y-Complex development.

On March 5, 2021, in response to aninquiry by Mekong Watch, JBIC said that Myanmar’s Defense Ministry received all payments for the land rent. JBIC also asserted that the rental payments are ultimately included in the government’s national budget, under the National Budget Law, but did not disclose the basis for this claim. JBIC said it was coordinating with the involved business entities as well as the Japanese embassy in Myanmar to confirm such details with the Myanmar government after outside “stakeholders” raised concerns; but it has yet to publicly do so.

“Even before the coup, we were raising concerns to the Japanese government and businesses about the dangers of money flowing into the military, but they did not take necessary measures,” said Yuka Kiguchi, Executive Director of Mekong Watch. “We strongly condemn the fact that Japan’s public funds likely ended up in the hands of the Tatmadaw.”

Under Myanmar’s 2008 Constitution, adopted during military rule, Myanmar’s Defense Ministry falls under the military, and the military is independent of the democratically elected government. Under article 20(b) of the Constitution, “The Defence Services has the right to independently administer and adjudicate all affairs of the armed forces.” Under article 232(b)(ii), the defense minister is nominated by the military commander-in-chief from the ranks of the military. Other laws further prevent any scrutiny or accountability of the Y-Complex lease payments. For example, according to section 39 of the Union Auditor General Law, the Defense Ministry is exempt from audit, so the land lease payments to the Defense Ministry are not subject to government scrutiny.

Abuses by the military, which has been long implicated in crimes against humanity in Rakhine State and other grave international crimes in ethnic areas throughout Myanmar, have intensified since the coup. The Assistance Association for Political Prisoners (AAPP) reported that as of July 12, 2021, the security forces have killed more than 900 people, and the authorities have arrested, charged, or sentenced more than 5,200. The military has also intensified operations in ethnic minority areas, with indiscriminate airstrikes and ground attacks that have hit schools, villages, places of worship, and other civilian structures.

“Japanese companies and the government knew that they were dealing with a military responsible for countless atrocities over many years, not a civilian-controlled defense ministry,” said Teppei Kasai, Asia program officer at Human Rights Watch. “The Japanese government and companies should make it clear that they do not intend to resume commercial projects with the Tatmadaw.”

In ajoint submission to the United Nations Working Group on Human Rights and Transnational Corporations and Other Business Enterprises on February 17, 2021, the five groups requested an investigation into whether the Y-Complex project is financing Myanmar’s military. At the time of the joint submission, none of the Japanese businesses involved in the Y-Complex project had conducted effective human rights due diligence as called for by the UN Guiding Principles on Business and Human Rights.

“It is deplorable that the companies involved in the Y-Complex have not clarified the status of the project following Myanmar’s attempted coup and the military’s widening campaign of terror,” said Yadanar Maung, spokesperson at Justice For Myanmar. “There is no justification for leasing land from the office of the quartermaster general, the very office that purchases weapons that the military uses to commit war crimes and crimes against humanity. The Japanese government and businesses must end their complicity in the Myanmar military’s atrocities.”

The UN Guiding Principles state that, “States should take additional steps to protect against human rights abuses by business enterprises that are owned or controlled by the State, or that receive substantial support and services from State agencies.” On May 12, 2021, the UN Working Group on Business and Human Rights and the Special Rapporteur on the situation of human rights in Myanmar called on businesses to “uphold their human rights responsibilities and put pressure on the military junta to halt grave human rights violations;” while adding that companies should act in line with the Guiding Principles to “avoid contributing to human rights violations, or becoming complicit in crimes if they continue to operate in Myanmar.”

On October 16, 2020, the Japanese government announced a five-year National Action Plan on Business and Human Rights, stating that it “wishes to contribute to promoting and protecting both the human rights of people who would be adversely affected by the activities of business enterprises and human rights for society as a whole, including the international community.”

“The Japanese government and businesses should get serious about human rights and follow the commitments laid out in the National Action Plan as well as their corporate policies in a responsible and proactive manner,” said Naoko Watanabe, Manager for Overseas Program Group at Japan International Volunteer Center. “If they don’t, they not only risk funding the Myanmar military but further damaging their reputations.”