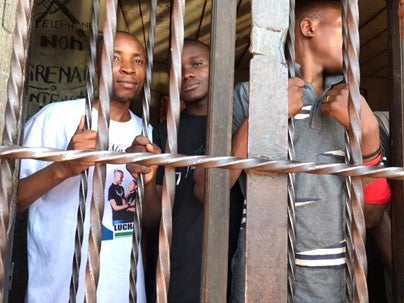 (Goma) – Congolese authorities should immediately and unconditionally release two activists who were arbitrarily arrested on April 19, 2021, after peacefully demonstrating in eastern Democratic Republic of Congo, Human Rights Watch said. Elisée Lwatumba and Eric Muhindo, both members of the youth movement Struggle for Change (Lutte pour le Changement, or Lucha), were charged with “incitement to civil disobedience” and “threats of attack,” and face up to five years in prison, their lawyer said.

The arrest in North Kivu province of the two activists and the baseless charges against them is part of a government crackdown on pro-democracy groups, the media, and other dissenting voices, which has been tightening since early 2020. On May 6, 2021, nearly three weeks after their arrest, martial law was imposed on North Kivu and Ituri provinces, further threatening fundamental rights and freedoms, and effectively stalling all court cases.

“The arbitrary detention of Elisée Lwatumba and Eric Muhindo is a worrying reminder that peaceful protesters are still at risk in Congo,” said Thomas Fessy, senior Congo researcher at Human Rights Watch. “The authorities should demonstrate their commitment to freedom of expression by immediately releasing both activists and dropping the charges against them.”

Officers of Congo’s National Intelligence Agency (Agence nationale de renseignements, ANR) arrested Lwatumba and Muhindo while they were returning home following a peaceful demonstration on April 19 in Butembo, North Kivu province. Muhindo told Human Rights Watch that they were forced into a police vehicle and taken to an ANR cell. “They beat us with sticks, even while interrogating us,” Muhindo said. “They told us to confess that we were Mai-Mai [rebels], and that we were part of a group that is trying to start a revolt.”

Earlier that day, both activists took part in demonstrations in town as part of a general strike movement that began on April 5 in the cities of Goma, Beni, and Butembo in North Kivu. Protesters called on the authorities to stop the killings by armed groups in Beni territory and said that MONUSCO, the United Nations peacekeeping mission, should leave Congo because of its perceived inaction to protect civilians.

Armed groups and government forces have killed more than 1,250 civilians during attacks in Beni territory since the start of a major military operation on October 30, 2019. These general strikes or journées ville morte (“ghost towns”) largely paralyzed socio-economic activities in the province.

Lwatumba and Muhindo were held at an intelligence agency detention facility for two nights, then taken to the prosecutor’s office, where they were interrogated in the presence of their lawyer. On April 24, they were transferred to Butembo’s overcrowded central prison. Facing extremely dire conditions, each paid about US$27 so they could get access to a section where they were allowed to have a mattress brought in from home, which they share with two other detainees, Muhindo said.

Congolese and international human rights activists have campaigned for their release. On July 13, Congo’s human rights minister, Fabrice Puela, told journalists that “these young men shouldn’t have their future compromised because they demonstrated in the Republic’s interests.” Puela said he discussed their case with the chief of military justice “to see how to obtain their provisional release.”

Lwatumba, 22, was in his final year at high school at the time of his arrest. “I am going to miss state exams [giving access to higher education],” he told Human Rights Watch. Muhindo, 32, is married with two children and owns a small business. “It has become very hard to take care of my family,” he said.

Their case was initially set to be heard at the Peace Tribunal (Tribunal de paix), a civilian court tasked with low-level crimes and infractions. However, under martial law orders – contrary to regional human rights standards – their case will be prosecuted before a military court. In its July 7 briefing, the UN Joint Human Rights Office stated that because cases were not being processed, “dozens of people were kept in pretrial detention without [their cases] being heard, in violation of the law.” It said that military tribunals had not been “given the means to proceed with criminal cases that were ongoing at civilian courts.”

A third Lucha activist has been arbitrarily detained in Goma since July 6. Parfait Muhani had come from Butembo for work when local authorities told him to meet with the provincial head of the National Intelligence Agency. He was taken to the military prosecutor’s office instead.

He was questioned about allegations by Lucha a month earlier that staff of the Congolese first lady’s Denise Nyakeru Tshisekedi Foundation misappropriated goods intended for people displaced by the recent Nyiragongo volcano eruption. The foundation filed a defamation complaint against Lucha. Lucha also alleged that local authorities, some of whom have since been arrested, were responsible for misappropriating goods.

“I said that I was not there [in Goma, at the time of the eruption], and that I knew nothing about the case,” Muhani told Human Rights Watch. “When they were done interrogating me, they said, ‘You are under arrest.’”

Muhani said he spent one night in a cell at the prosecutor’s office and was told to pay $10 or be tortured. The following day, he was shown a provisional arrest warrant and transferred to Goma’s central prison, where he remains, facing charges of “defamatory statements,” “contempt for the supreme magistrature,” and “criminal association.” These baseless charges against Muhani should be dropped and he should be immediately and unconditionally released, Human Rights Watch said.

Human Rights Watch has documented dozens of cases involving state agents and security forces targeting activists and journalists over the past year. On January 20 a military court acquitted eight Lucha members, after they spent a month in detention and faced up to 10 years in prison for taking part in a peaceful march in Beni territory.

Also in Beni, dozens of children calling for peace were violently accosted and rounded up by police forces on April 29. President Felix Tshisekedi apologized to all the children involved on June 17, but only after he appointed the police commander in charge of the round-up, François Kabeya, mayor of Goma on May 25.

“The Congolese government continues to target activists who raise uncomfortable truths and advocate for peace and justice,” Fessy said. “The activists Lwatumba, Muhindo, and Muhani should never have been arrested and now martial law is holding back court cases, keeping these activists unjustly in detention.”