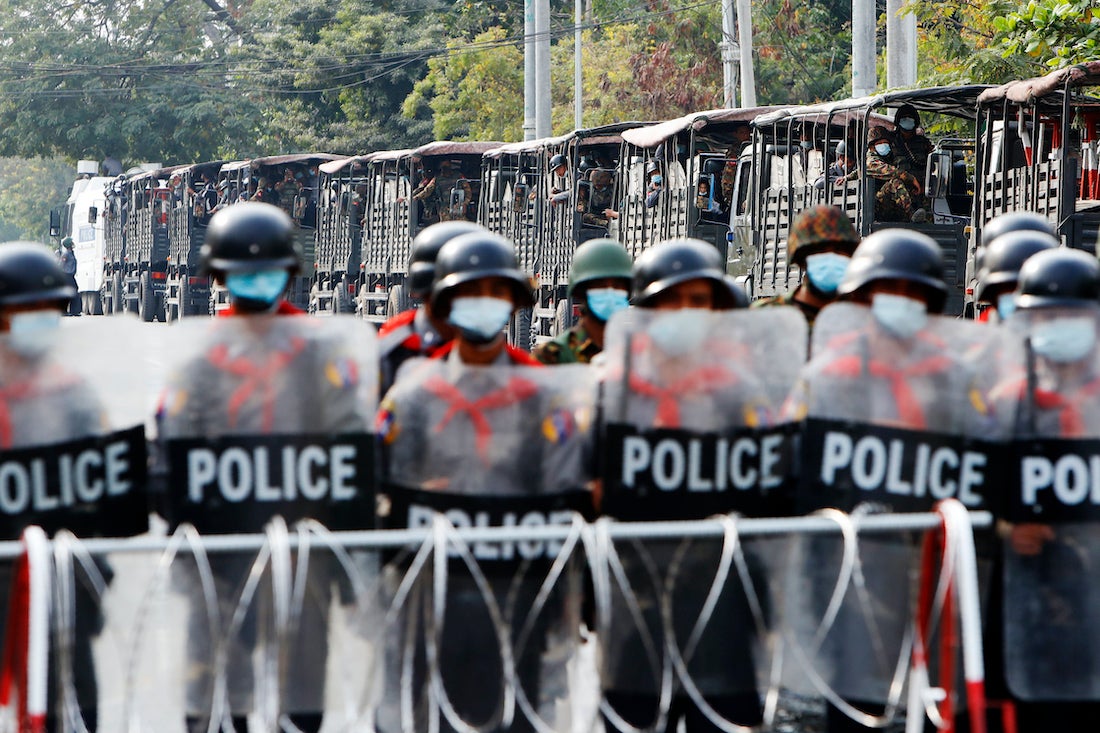 (Bangkok) – The Myanmar junta’s military tribunals have sentenced 65 people to death following unjust trials since the military coup on February 1, 2021, Human Rights Watch said today. State media and local groups have reported that 26 of those sentenced are currently detained, while 39 were convicted in absentia.

Military tribunals handed down the death sentences in areas of Yangon where the junta declared martial law in March. In imposing martial law, the junta transferred all executive and judicial power to the head of the relevant regional military command and instituted the death penalty as a possible sentence for 23 crimes.

“The Myanmar junta has added to its mass shootings of protesters on the streets by having military tribunals hand down several dozen death sentences after egregiously unfair trials,” said Shayna Bauchner, Asia researcher at Human Rights Watch. “Apparently aimed to chill the anti-coup protest movement, these death sentences should serve as a stark warning to foreign governments that urgent action is needed to show the junta that there will be a reckoning for its crimes.”

On March 14 and 15, the State Administration Council (SAC) junta declared martial law in 11 townships in Yangon and Mandalay, following a weekend in which security forces killed an estimated 120 people during anti-coup protests. The Yangon commander, Maj. Gen. Nyunt Win Swe, was granted oversight of all administrative and judicial powers in the designated Yangon townships.

The martial law orders lay out 23 categories of crimes to be charged in military tribunals in the designated townships, all of them carrying a potential sentence of capital punishment. The designated offenses include several put in place by the junta since the coup. The majority are not capital crimes in civilian courts. The 65 death sentences have been imposed for murder charges under penal code sections 302, 396, and 397.

The martial law regulations require the SAC chair, Sr. Gen. Min Aung Hlaing, to approve all execution orders. They also state there is “no appeal for decisions or convictions handed down” by a military tribunal. The only option for defendants sentenced to death is to apply to the SAC chair within 15 days of the conviction to reverse the decision. Min Aung Hlaing has the authority to overturn the decision, change the sentence to a lesser penalty, or approve the decision. The applications can only be filed through prison officials, not lawyers, Radio Free Asia reported.

The execution orders were issued in six batches between April and June. The rushed and concealed legal proceedings, carried out against civilians by military courts not properly convened according to law, have gravely deprived detainees and those convicted in absentia of their basic fair trial rights. Military tribunals in Myanmar have long been conducted behind closed doors inside Yangon’s Insein Prison, where the rules of evidence and procedure applicable in civilian courts do not apply. Those on trial before military tribunals face almost certain conviction regardless of the validity of the charges against them, while the trials are held outside the scrutiny of the public or the international community.

In the first death penalty case brought by the junta, state media reported that 18 men and a woman were sentenced to death on April 8 for allegedly attacking two military officers riding a motorbike, one of whom later died, in North Okkalapa township in Yangon on March 27. The 19 people were sentenced under penal code sections 396 and 397 for murder and robbery. Another man was sentenced to death on April 28 for the same incident. Three of those sentenced are in custody; the remainder were convicted in absentia.

A Yangon military tribunal sentenced two women and five men to death on April 12 under penal code section 302(1)(b) for their alleged involvement in the murder of a woman in Hlaing Tharyar township who had reportedly supported the military. Four are detained; three others were convicted in absentia.

On May 24, Insein prison’s military tribunal sentenced 18 people – 15 men, a woman, and 2 teenage boys – to death under penal code section 302(1)(c) on charges of allegedly killing a supporter of the military on March 29 in South Dagon. Seven are in hiding; eleven have been detained. The two teenagers, ages 17 and 15, were detained on April 17. State media reported that they were transferred to a juvenile court. Four of the detained men are brothers.

Five men were sentenced to death on May 27, four of them in absentia, under penal code section 302(1)(b) for the alleged fatal attack of a man living in Shwe Pyi Thar township.

In the latest reported convictions, a military tribunal sentenced 15 people – 13 men and 2 women – to death on June 21, charged under penal code section 302(1)(b) for allegedly killing an informant and two of his sons on March 15 in Shwe Pauk Kan Myothit, North Okkalapa township. Seven are detained; eight were sentenced in absentia.

Since February, the junta and security forces have responded with increasing violence and repression to the nationwide anti-coup movement. State security forces have killed over 900 people and detained an estimated 5,300 activists, journalists, civil servants, and politicians.

The martial law orders also allow for death penalty sentencing for treason and related offenses, several of which were put in place or expanded by the SAC to broadly criminalize protest activity and the Civil Disobedience Movement. Under the expanded treason provisions, it is unlawful to “excite disaffection against” the defense forces, effectively making any criticism of the military treasonous. The military courts have also been assigned to hear charges used to stifle dissent, including Penal Code section 505A, a new provision put in place by the junta that makes a criminal offense comments that “cause fear,” spread “false news” or “agitate directly or indirectly a criminal offense against a government employee.”

Some detainees on death row reported being beaten by police in prison. Myanmar security forces have subjected many detainees arrested since the coup to torture and other ill-treatment, including routine beatings. Detainees are frequently kept incommunicado, unable to contact relatives or legal counsel. The victims, among them a 17-year-old boy who spoke to Human Rights Watch, described beatings, burnings from lit cigarettes, prolonged stress positions, and gender-based violence.

Other sources interviewed said security forces often transported detainees to police precincts or military interrogation facilities, where they would be beaten and forced to stand, kneel, or lie in stress positions for hours.

Myanmar has not carried out judicial executions of prisoners since 1988, although Myanmar law still retains the death penalty, and courts have continued to sentence people to death. Human Rights Watch opposes the death penalty under all circumstances because of its inherent cruelty and irreversibility, and has long called on Myanmar to ban all capital punishment.

“These bogus military tribunals are handing down unfair and unappealable death sentences under direction from a commander sanctioned by the European Union, United States, and others for committing the worst crimes under international law,” Bauchner said. “The United Nations, EU, US, and other governments should be demanding the release of all those wrongfully imprisoned and ramping up pressure so the junta knows that what they do – even behind prison doors – is being watched.”