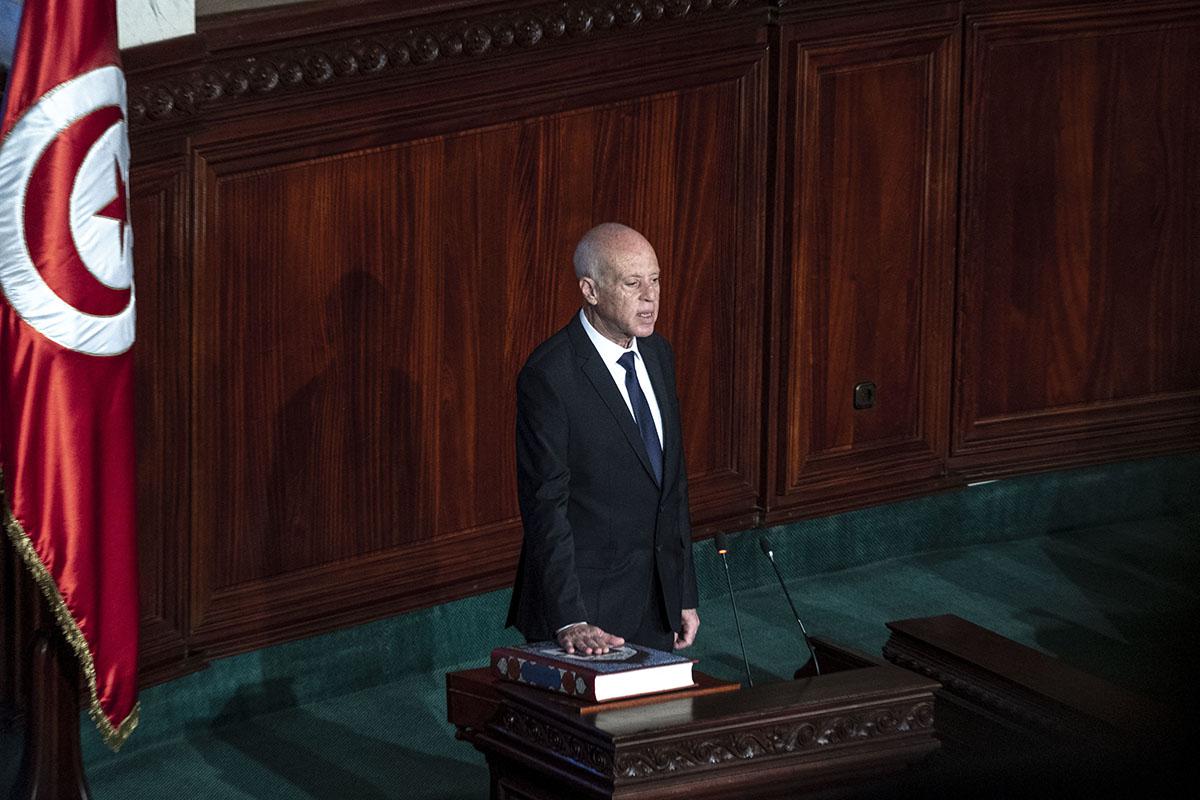 On July 25, 2021, Saied announced that he was dismissing Prime Minister Hichem Mechichi, suspending parliament, lifting parliamentary immunity, taking over supervision of public prosecution, and implementing other extraordinary measures that he said were necessary to address Tunisia’s months-long political crisis. Amid much finger-pointing, the president blamed the Mechichi government for mishandling the Covid-19 pandemic, which has aggravated a prolonged economic slump. On July 26, police raided the Tunis headquarters of Al Jazeera TV, evicting its staff and closing down the office.

“It’s ominous for human rights when a president claims constitutional backing for seizing enormous powers and the next thing you know police start going after journalists,” said Eric Goldstein, acting Middle East and North Africa director at Human Rights Watch. “Whatever the government’s record in responding to the Covid-19 crisis, concentrating powers that could be used against basic rights should always set off alarm bells.”

In his televised speech on July 25, Saied announced that he will run the government “with the assistance of a new prime minister” whom he will appoint to form a new government. The president claimed he was acting constitutionally, which others have contested. The following day, the president met with representatives of civil society and assured them, “There’s no possibility that rights and freedoms will be trespassed, and that principle of equality between all Tunisians remains the same.”

Saied invoked article 80 of the 2014 constitution, which authorizes the president to take “any measures necessitated” in case of “imminent threat jeopardizing the nation, and the country’s security and independence.” He said parliament will remain suspended “until the reasons for invoking article 80 have ended,” but a statement issued by his office said it will last for 30 days. The president said article 80 prohibits dissolving the parliament, implying that suspending it was permitted. However, article 80 provides that parliament should be in a “state of permanent session” when article 80 is invoked.

Saied’s decisions follow months of political deadlock among President Saied, a political independent, Prime Minister Hichem Mechichi, and the parliament, the Assembly of Representatives of the People, where the Islamist Ennahda and allied parties hold a majority. Immediately after the president’s speech, crowds gathered in several cities to support his move.

The raid on the Al Jazeera office was carried out by about 20 plainclothes police. They did not show warrants but said they were acting on orders of the judiciary, the station reported. The police officers instructed the journalists to leave the premises and not to try to return. As of the afternoon of July 27, police officers reportedly continued to block access to the office.

The president issued a statement around noon of July 26 saying he had fired Defense Minister Ibrahim al-Bertaji and acting Justice Minister Hasna Ben Slimane. Reuters also reported that he assigned Khaled Yahyaoui, the director general of presidential security, to oversee the Interior Ministry. Mechichi had also been acting interior minister.

On the evening of July 26, the president decreed a one-month nighttime curfew starting July 26 and prohibited most intercity travel and public gatherings of more than three people, stating this was as part of a “comprehensive public health quarantine.” Any such drastic curbs on fundamental rights should be limited and clearly justified as necessary to confront a genuine emergency, and be subject to judicial review, Human Rights Watch said.

One of the factors adding alarm over the president’s July 25 announcement is the absence of a Constitutional Court, an institution that the 2014 Constitution created and endowed with the authority to overturn government measures it deemed unconstitutional, including those that violated the rights guaranteed under the constitution. Such a court would have the authority to review a decision by the president of the Republic to prolong the extraordinary powers decreed under article 80 of the constitution, to determine whether the circumstances warranted the extension.

But the court, a key guarantor of human rights, has never been created despite a constitutional deadline to do so. For years, parliament has failed to agree on the judges it gets to appoint to the court, which requires approval by two-thirds of the chamber. Human Rights Watch and many other groups have previously warned that the lack of the Constitutional Court hindered the protection of rights.

Saied also announced stripping parliament members of their immunity from prosecution, while at the same time putting himself in charge of supervising the Office of Public Prosecution. His office has yet to issue any declaration or decree explaining this move. However, taken together, these measures threaten the integrity of Tunisian judicial system, Human Rights Watch said, notwithstanding the continuing failure of courts to develop a reputation for independence following the country’s 2011 uprising and which the 2014 Constitution guaranteed.

The 2011 uprising, the popular revolt that year in several Arab countries that resulted in a transition to democratic rule in Tunisia, was precipitated by the self-immolation of a young peddler over police harassment. Despite ousting authoritarian president Zine el-Abidine Ben Ali and free elections resulting in a multiparty politics, political actors have failed to reverse the country’s economic slump and high unemployment.

President Saied should allow all media, including Al Jazeera, to operate freely and announce that he will tolerate no infringements on the rights of all media to cover and criticize his policies, Human Rights Watch said.

“Whether they cheered or protested President Saied’s decisions, all Tunisians deserve to live in dignity and to have a government that’s accountable,” Goldstein said. “People’s grievances, however legitimate, should not serve as a pretext to undermine rights."