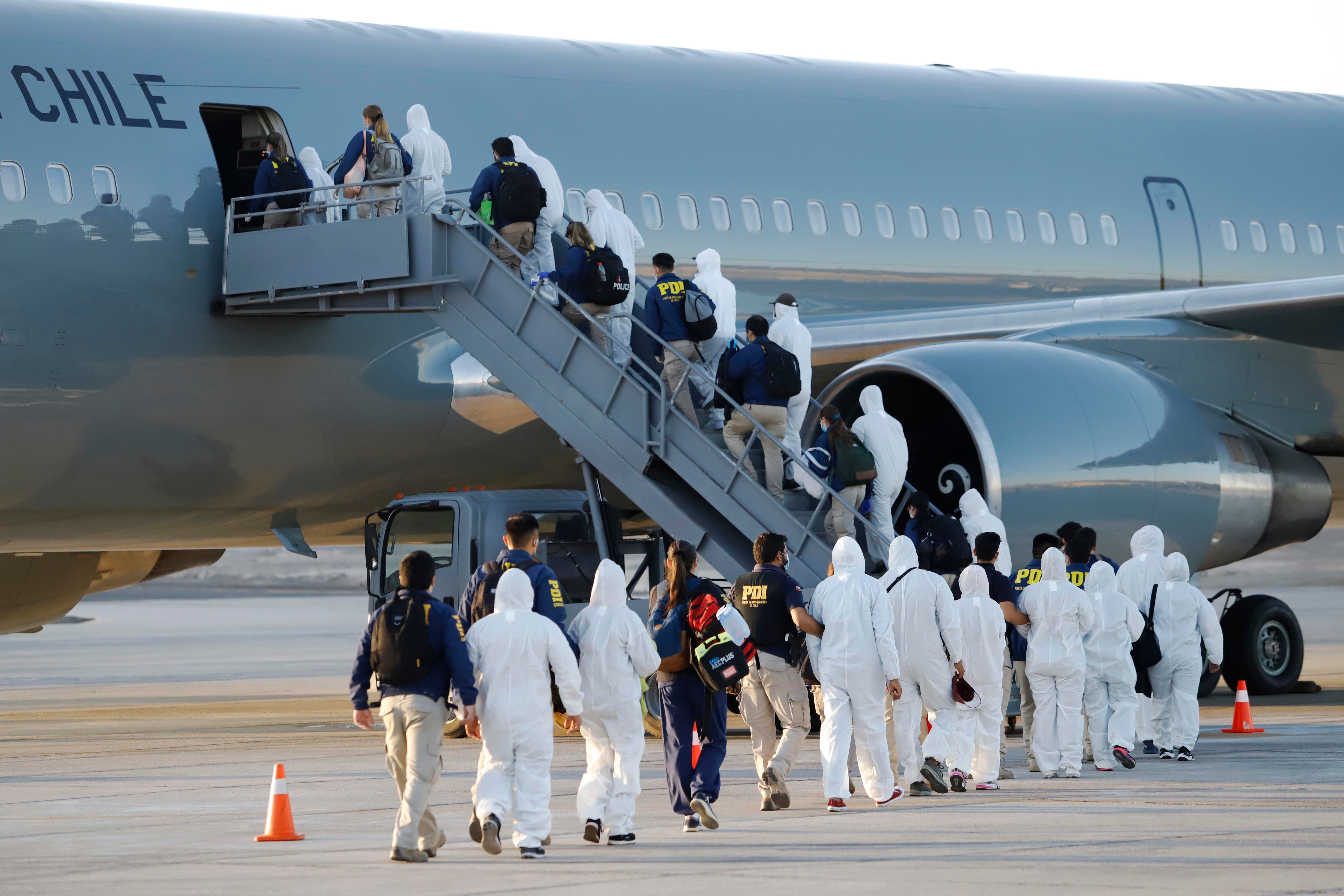 A series of rulings by Chile’s Supreme Court and various courts of appeal have recently ordered authorities to stop, in specific cases, numerous deportations, citing the heightened risks deportees would face in Venezuela. The rulings have also exposed violations of due process, including the right to be heard and to present evidence, before deportations are carried out.

“Chilean courts have shown that many Venezuelans who fled a devastating crisis at home were deported without due process, violating basic international law standards,” said José Miguel Vivanco, Americas director at Human Rights Watch. “It’s inconsistent for the Chilean government to strongly condemn the abuses in Venezuela while ignoring Venezuelans’ rights in the rush to deport them to a country where their lives may be at risk.”

More than 457,000 Venezuelans are estimated to be living in Chile. Most of them have legal status; however, government migration policies implemented since 2019 have made it increasingly difficult for Venezuelans to apply for and obtain visas or asylum, which limits their options for regularization.

In April, the government announced that it was planning to deport 1,500 people of various nationalities on 15 charter flights in 2021. As of April, the government had deported 294 people, most of them without judicial review, government figures obtained by the Jesuit Migrants Service (Servicio Jesuita a Migrantes, SJM) show. The majority were Venezuelan.

The government deported another 125 people of various nationalities in June. On June 6, Chilean authorities deported 53 Venezuelans, including 34 who were summarily deported over the weekend, when appeals courts were closed. The other 19 had been convicted of a crime, which in Chile can be a basis for deportation as an alternative measure to imprisonment.

Some of them had family in Chile, which should have weighed against their deportation; had not been granted a phone call or access to a lawyer, limiting their ability to challenge the deportation; or even had appeals pending on their deportation orders, human rights organizations and the Diego Portales University Migrants and Refugees Legal Clinic told Human Rights Watch.

Interior Minister Rodrigo Delgado said these deportations were carried out in coordination with Venezuelan authorities. Following the deportations, the Supreme Court ordered appeals courts to work outside of regular working hours if needed to hear urgent appeals, such as those filed on behalf of people detained for deportation.

Human Rights Watch analyzed 21 judicial rulings protecting a total of 80 Venezuelans and more than 250 deportation orders, interviewed key humanitarian and human rights actors, and documented two illustrative cases of deportations that occurred on the June 6 flight in depth, including through interviews with the deported and with their family in Chile.

Darwin Daniel Sosa Piña, 24, was detained on June 5 at his workplace, transferred to an investigations police (Policía De Investigaciones, PDI) station, and deported on the June 6 flight. He told the investigative police agents that his pregnant partner was in Chile, he told Human Rights Watch, but they proceeded with the deportation regardless. An appeal of the deportation order he received in March was pending, he said. The Iquique Court of Appeal annulled the deportation order on June 14, when he was already in Venezuela.

In another case, a man who identified himself as a PDI agent phoned a 58-year-old woman on June 5 and told her to meet him at a supermarket to discuss her legal status in Chile, a family member told Human Rights Watch. When she arrived at the supermarket, the agent handcuffed her and said she would be deported, on an order issued nearly a year earlier that she says she never received. She was able to talk to her daughter, who is living in Chile on a professional visa, once before an agent took her phone.

A legal challenge filed by human rights lawyers on June 5, after speaking with her daughter, said that returning to Venezuela could endanger the woman’s health because she would not be able to get treatment for two herniated disks, and that her 19-year-old son with a disability, who lived in Chile with her, relied on her for daily support. Nonetheless, she was sent to Venezuela on the June 6 flight. The court ordered her deportation stopped after it had already taken place.

These cases illustrate a broader problem: that the deportations being carried out by local authorities and the PDI do not comply with due process, Human Rights Watch said.

Human Rights Watch has identified the following problems related to inadequate deportation processes and other failures in the immigration and asylum systems:

Lack of Due Process – The PDI often tells Venezuelans entering the country irregularly that they have to “self-report” in order to regularize their status, and then uses those reports as the sole or main evidence for deportation. The PDI sometimes fails to tell migrants why they are being held or says that detention is part of a process to obtain legal status in the country. This keeps the migrants from contacting a lawyer or alerting their family that their deportation is imminent.

Judicial rulings, deportation orders issued by one of the regional governments reviewed by Human Rights Watch, and interviews with key humanitarian figures and deported migrants show that in the vast majority of cases officials did not allow migrants to make their case before issuing a deportation order, hindering their right to present evidence and be heard to challenge their removal. Deportation orders were sometimes issued months before the expulsion took place, but in many cases the person involved was not properly notified.

Many migrants learned about their deportation orders a few days before or on the same day they were detained. Once detained, they usually did not have access to a lawyer, and when a lawyer went to a PDI station to represent them, in most cases they did not have sufficient time to appeal to a court or for the court to grant an order to halt the deportation.

The Supreme Court has annulled several deportation orders in recent months on the grounds that they were the result of an “insufficient administrative adversarial procedure,” almost all of them after the fact. Chilean authorities say that “logistical issues” – not a strategy to “leave someone out” – required weekend deportations.

Human Rights Watch interviews and the rulings in such cases show that Chile, in practice, deprived migrants of the full exercise of rights guaranteed under international law. UN agencies have said that Chile’s weekend deportations limit “access to justice,” and the UN special rapporteur on the human rights of migrants, Felipe González, has criticized them on similar grounds. Even on weekdays, deportations carried out by the government did not always allow enough time for a judicial decision blocking deportation to be issued before the flights.

The Convention on the Protection of the Rights of All Migrant Workers and their Families, to which Chile is a party, guarantees migrant workers and their families the right to a review of an expulsion case and to seek a stay of the decision while the review is pending.

Collective Deportations and Lack of Individual Determination – Although an administrative resolution was filed for each migrant deported in February, these provided no individual analysis of the circumstances of each case, the UN Committee on Migrant Workers and Their Families has said. The language used in various cases was almost identical, and no “case-by-case analysis” was conducted.

Human Rights Watch reviewed more than 250 administrative resolutions issued by the Tarapacá Regional Intendency between February and April that were provided by the Jesuit Migrants Service, and found them to be consistent with the committee’s conclusions. The decisions make no reference to the individual circumstances of each case, which apparently were not considered as a basis for the decisions.

In addressing Chilean deportations, UN agencies in Chile and the UN special rapporteur have repeatedly emphasized that everybody is entitled to an individual assessment, including of their protection needs and the risks that deportation might pose to their life, freedom, or integrity.

Separation of Families – For the many Venezuelans whose parental or marital status remains unregistered with the Chilean state, summary deportations deny migrants the opportunity to demonstrate family ties in Chile. Establishing these ties can be difficult for Venezuelans as official documents – including marriage and birth certificates – are hard to obtain in Venezuela and abroad, given that Venezuelan consular services are limited. Because deportation decisions in Chile are consistently being made without giving migrants a hearing, migrants lack an opportunity to present arguments and evidence demonstrating family ties.

Human rights lawyers told Human Rights Watch that some of the detainees with deportation orders do not tell authorities about family ties to protect their family members from deportation. Deportations may violate children’s right to family unity. Chile should facilitate the reunification of children with their parents, prioritizing a child’s best interest, Human Rights Watch said.