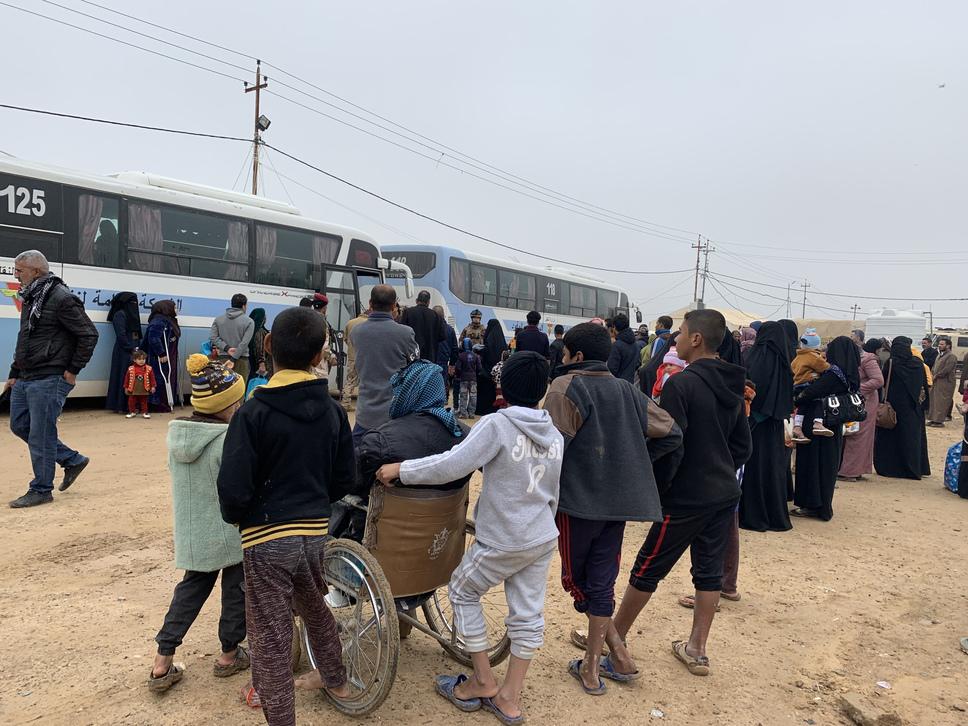 (Beirut) – The Iraqi army has unlawfully evicted dozens of families from a village north of Baghdad since July 2021 in an apparent family feud involving a government minister, Human Rights Watch said today. The 91 families from al-Aetha, a village in Salah al-Din governorate, were sent to a displacement camp without any of their possessions.

The families from al-Aetha had been forced out of their village years earlier during fighting between the government and the Islamic State (also known as ISIS). Many had previously been forcibly evicted by local and security authorities from displacement camps and made to return to their village. Those displaced recently say they were evicted as part of a family feud involving a government minister, who is from the village, and his brother, who had married a woman also from the village with alleged past ties to an ISIS member. The authorities should immediately halt the evictions and punish all officials responsible for the abuse of their authority.

“For years Iraqi authorities have claimed they are moving communities into or out of camps for their own protection or best interests,” said Belkis Wille, senior crisis and conflict researcher at Human Rights Watch. “But the case of these villagers being ping-ponged between their village and displacement camps is yet again proof that these evictions are often about the authorities’ personal or political considerations rather than the well-being of those affected.”

Human Rights Watch has been documenting the forced evictions of families, including those with perceived affiliation with ISIS, for years. From August 1 to 5, Human Rights Watch interviewed seven al-Aetha residents in in Salah al-Din. They said that starting on July 14, Iraqi army units came to their village and evicted people by force with no prior notice and without providing any justification or presenting any lawful order. On August 10, Human Rights Watch spoke to a representative from the Ministry of Displacement and Migration who did not provide any justification for the evictions.

Villagers said that on July 14, about two dozen Iraqi army vehicles arrived in the village with a list of names and forced about 19 families out of their homes and onto flatbed trucks, including four of the people interviewed. The soldiers told the villagers they were taking them to the one displacement camp still open – in Nineveh, 15 kilometers north – but gave them no reason. Between July 31 and August 4, the army returned and took another 72 families to the camp, including two of the people interviewed.

One woman said that when the army evicted her family on July 14, a woman had tried to flee the village to avoid eviction but the soldiers stopped her: “I heard a soldier tell her that if her family didn’t come, they would arrest her husband.”

The villagers all said that the army did not allow them to take any of their possessions. The mother of six said she has no mattresses, blankets, or fans in the camp. One mother said she left her three children in the village with their uncle because she could not bring any possessions and would have nothing to make them comfortable.

The people interviewed said these new evictions had severely disrupted their lives. The mother of six said one of her sons refused to leave and fled to his grandmother’s house: “My mother told me that he is traumatized and is refusing to eat. He cries all day. My other two sons have missed their final secondary exams and are stuck here in the camp.”

Although about 270 families remain in the village, on July 12 the minister’s son said on Facebook that all of the families from the village will eventually be evicted. One woman interviewed who is still in the village she worries that they will come for her soon.

Three villagers said they believe that the evictions took place because of a familial feud. They said that in July the minister’s brother married a woman from the village who had formerly been married to an ISIS member. They said that village elders told them that the minister decided to retaliate against his brother by evicting the residents. One villager said that when he asked one of the soldiers why they were being evicted, the soldier said, “It’s because of some problem between you villagers and the minister.” The villager said: “We are being blamed for something we had no part in. We are powerless victims.”

One woman who identifies herself as a journalist on Facebook posted on July 14 that she was extending her appreciation to the minister  and the security forces for the rapid response after she had posted on July 9 about the marriage. She claimed that the minister had banned his brother from speaking to the media and from “interfering with the affairs of the displacement,” and has had all weapons and government vehicles in his possession confiscated. She also accused the villagers of being “sleeper cells and time bombs” but provided no evidence.

While some villagers had been forced to return to the village, a few said that their situation had improved after returning. One woman said she had not wanted to leave the camp at the time because she had felt safe there. But after several months in the village her situation improved; she found employment and was able to enroll her children in school. “My son was so happy we were home that he even asked me to delete all the photos we had taken inside the camp from my mobile phone,” she said.

The government has not provided any official justification for the evictions. On August 5, Prime Minister Mustafa al-Kadhimi sent his national security adviser to investigate, the villagers said. The adviser interviewed some of the evicted families. Two people, including one who attended the meeting, said that someone who did not clearly identify himself beyond saying he was speaking on behalf of the minister approached her in the camp before the meeting and told her not to mention the minister’s brother’s wedding.

The prime minister should ensure that those in power do not unduly influence the investigation of the evictions and that all officials responsible for the unlawful evictions are held accountable. He should also open investigations into other wrongful evictions by the authorities since he took office in May 2020, leading to public findings on the reasons and commitments to take measures to prevent illegal evictions.

“The notion that a minister can on a whim and without justification kick hundreds of people out of their homes should shock the conscience,” Wille said. “These families have been suffering for years at the hands of a government that has endorsed and sometimes participated in a range of collective punishment measures against them.”