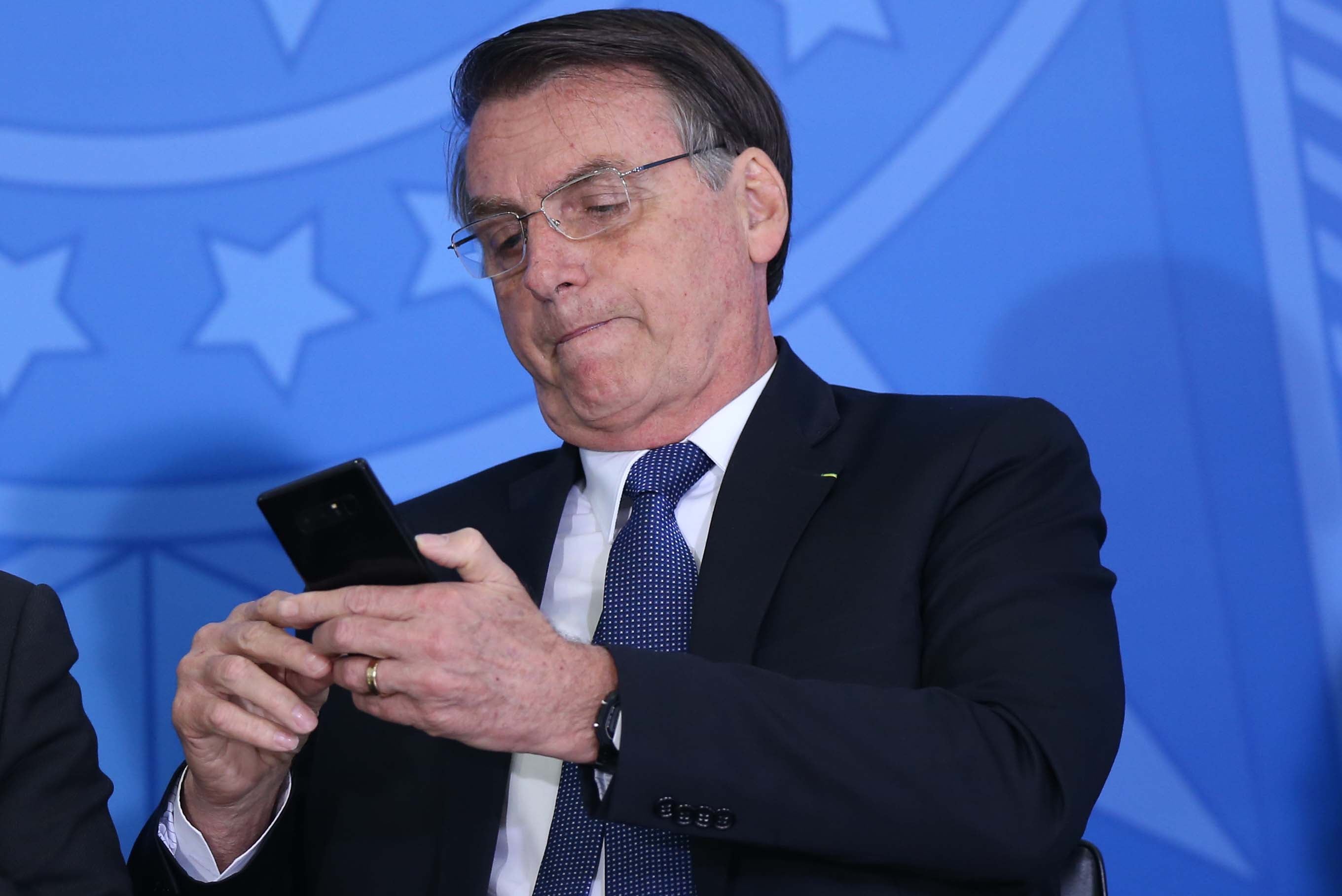 President Jair Bolsonaro of Brazil is blocking social media followers who criticize him, violating their rights to free speech and access to information, and to participate in the conduct of public affairs, Human Rights Watch said today.

Human Rights Watch identified 176 blocked accounts, the vast majority on Twitter, including journalists, members of Congress, influencers with more than a million followers, and private citizens with just a handful. In addition, we identified blocked accounts of news media and nongovernmental organizations. The total number is most likely higher.

“President Bolsonaro uses social media as a key means of public communication and interaction with the public,” said Maria Laura Canineu, Brazil director at Human Rights Watch. “But he is trying to rid his social media accounts of people and institutions that disagree with him and turn them into spaces where only applause is allowed, part of a broader effort to silence or marginalize critics.”

Blocked people need to log out of their social media accounts to see President Bolsonaro´s posts, making it harder to get government information. They cannot interact with the posts, such as to repost, respond, like, or comment on them. This prevents blocked people from participating in public debate, violates their free speech rights, and discriminates against them on the basis of their opinions, Human Rights Watch said. Blocked journalists cannot ask questions or request information, infringing on freedom of the press.

Human Rights Watch filed a petition through the Access to Information Law asking for the number of people blocked by President Bolsonaro on Twitter, Facebook, and Instagram. The president’s communication office denied the information, saying that it did not manage those accounts.

The determination as to whether social media accounts of senior government officials are private should not depend on who manages the account, but on whether the officials use them to share information of public interest or to discuss public affairs, Human Rights Watch said.

President Bolsonaro has used social media to make official announcements, like infrastructure investments and a minimum wage increase; to lash out at his political rivals; and to comment on foreign affairs, like congratulating the new Israeli prime minister for his election. He also interacts with comments by constituents, ranging from Covid-19 vaccines to political appointments.

It is impossible to know the total number of people blocked due to lack of transparency. In April and June Human Rights Watch posted messages on its Brazil Twitter, Facebook, and Instagram accounts asking users if President Bolsonaro had blocked them. More than 400 said yes, the vast majority on Twitter. Of thesem 176 people procided screenshots that showed the username, which identifies an account, and a message saying they had been blocked by Presidente Bolsonaro’s account.

HRW is investigating blocking on social media. If @jairbolsonaro or another authority blocked you, send the print of the block (made on the PC) here, DM or at brazil@hrw.org. It is important in the image to have your @. Tell us when and why you think this happened.

Human Rights Watch checked each screenshot and found no signs that they had been maliciously altered. None were following President Bolsonaro’s Twitter account, something consistent with accounts that have been blocked. Most of the individuals who sent us screenshots said they were blocked after publishing comments criticizing the government.

Left:  “As soon as I asked him for a position on the Pantanal fires”. Right: “He [Bolsonaro] posted that the opening of a railway would result in a reduction of many tons of carbon in the atmosphere. I asked him if starting now he believed in global warming.”

Left: : “The reason for the blocking was my asking about the blackout in Amapá [a Brazilian state]”. Right: “I was blocked because I asked to mourn the almost 500,000 deaths! [from Covid-19 in Brazil]”

Human Rights Watch also searched Twitter using key words to identify other blocked accounts and found another 38 people with verified accounts – that is, accounts that Twitter has identified as authentic and of public interest – who posted on Twitter that President Bolsonaro had blocked them.

“We have found out that @jairbolsonaro blocked @ReporterB. Blocking news media and journalists has become common practice by this government. We condemn such attitude, and it will not curtail our investigations into actions by the president that have an impact on the environment, human rights, and health.”

The Brazilian Association of Investigative Journalism (Abraji, in Portuguese) has identified 135 reporters blocked by senior government officials, the majority of them by President Bolsonaro. Some may have replied to Human Rights Watch posts and would be included in the list of people blocked.

Human Rights Watch also filed access to information petitions requesting the number of people blocked by the president’s cabinet. The citizenship minister and President Bolsonaro’s chief of staff until July 2021 said they had not blocked anyone, while Vice President Hamilton Mourão said he had blocked 28 people, just on Twitter. The other ministers refused to provide the information, saying either that they had no accounts or that they were private.

The president´s Communication Office and the ministries said they had blocked a total of 182 people from their institutional accounts. The Education and Justice Ministries account for 85 percent of those.

Brazil’s Congress is considering a bill that would prohibit elected and senior officials from blocking followers from social media accounts they say “officially represents their role,” but it would not prevent them from blocking them on other accounts they might use to conduct public affairs.

At least six cases are pending before Brazil’s Supreme Court about the legality of President Bolsonaro’s social media blocking. At least two justices out of eleven issued their opinions in two of the cases, finding that the practice was discriminatory and infringed on the rights to information and free speech. The rulings by the full court are still pending.

Courts in other countries have ruled that public officials cannot block people from social media accounts they use for official business just because they express an opinion the official dislikes. In the United States, an appeals court ruled in 2019 in a case involving then-President Donald Trump that the first amendment of the US Constitution, which upholds free speech, “does not permit a public official who utilizes a social media account for all manner of official purposes to exclude persons from an otherwise‐open online dialogue because they expressed views with which the official disagrees.”

In a case filed by a reporter, Mexico’s Supreme Court ruled in 2019 that the attorney general of the state of Veracruz was using his Twitter account to provide information about his work as a public servant, and thus it should be available “to all constituents,” particularly to journalists, who should have greater protections for their ability to access information of public interest.

Under international human rights law, governments are obligated to protect freedom of expression, including the right to seek, receive, and impart information of all kinds online and offline; as well as people’s right to take part in the conduct of public affairs, including by engaging in discussions about matters of public interest.

The International Covenant on Civil and Political Rights (ICCPR) and other treaties permit restrictions on freedom of expression only if they are provided for by law, and are strictly necessary and proportionate to achieve a legitimate aim, including the protection of the rights and reputations of others or the protection of national security, public order or public health and morals, and are nondiscriminatory. The ICCPR and the American Convention on Human Rights prohibit discrimination on the grounds of political or other opinion. Both the UN General Assembly and the Human Rights Council have stated that the same rights that people have offline, particularly freedom of expression, must also be protected online.

In addition, the Declaration of Principles on Freedom of Expression, adopted by the Inter-American Commission on Human Rights in 2000, states that “public officials are subject to greater scrutiny by society.”

Based on these standards, senior public officials like President Bolsonaro and his cabinet members should only be able to delete comments by social media followers or block them under very limited and narrowly defined circumstances, which should be provided for in law. Such circumstances would include situations in which restrictions are necessary to protect a person’s rights to nondiscrimination or personal security, such as when the content or behavior constitutes sexual harassment or incitement to violence, or when users publish private, personally identifiable information about a person with malicious intent.

Even as he blocks news organizations and critics from his accounts, President Bolsonaro has complained that social media platforms have deleted his or his followers’ posts, claiming that he and his followers are “being restricted” on social media. In a speech in May, he announced he would issue a decree to address the situation. An early draft revealed that it would severely restrict social media platforms’ capacity to moderate content, such as by eliminating harmful misinformation. On August 9, President Bolsonaro said that he would introduce a bill – instead of issuing a decree – that would ban platforms from taking down content without a judicial order.

“President Bolsonaro claims that his free speech rights and those of his followers are being curtailed because platforms have deleted harmful misinformation and inauthentic accounts, but he has no qualms about violating the access to information and freedom of expression rights of people who disagree with him.” Canineu said.