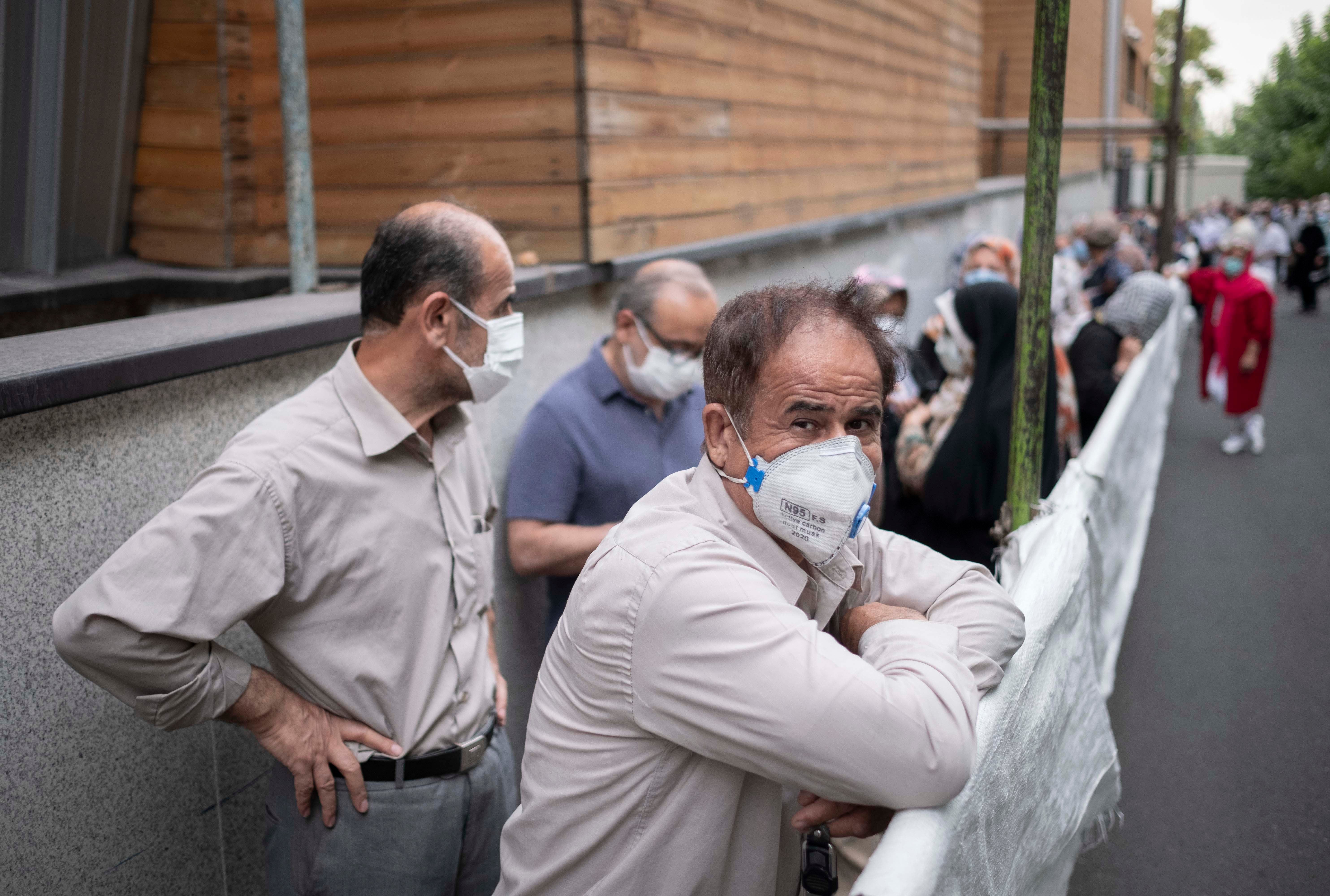 (Beirut) – Iranian authorities’ prohibition on procuring US- and UK-produced vaccines, lack of transparency, and mismanagement are exacerbating the already dire impact of the Covid-19 pandemic in Iran, Human Rights Watch said today.

Iran is experiencing a “fifth wave” in the pandemic with a daily death toll of at least 655 and a total of almost 100,000 deaths as of August 18 based on the government’s official statistics. Iranian authorities should urgently redouble efforts to respond effectively to the crisis, including by using all resources necessary to secure lifesaving vaccines and transparently communicating and enforcing effective and clear vaccination and other safety guidelines.

“Iranians are expressing their anger at the authorities’ incompetence and lack of transparency in controlling the Covid-19 pandemic, which is costing an Iranian life every few minutes,” said Tara Sepehri Far, Iran researcher at Human Rights Watch. “Public trust is a crucial factor in managing the public health crisis, yet Iranian authorities’ track record of repeated failure is happening again.”

The number of deaths and hospitalizations in Iran is on the rise, and social media reports indicate that there is a shortage of hospital beds and medicine in various cities. On August 14, Iranian authorities arrested six prominent human rights lawyers and activists who, according to their colleagues, were working on filing a complaint against authorities’ mismanagement of the Covid-19 crisis. Authorities released one member of the group overnight, but human rights defenders Arash Keykhosravi, Mehdi Mahmoudian, Mostafa Nili, Mohammadreza Faghihi, and Maryam Afrafaraz remain in detention.

Iranian officials have blamed sanctions and delays in importing vaccines, as well as each other, for the slow roll out of the vaccination problem, without providing clear evidence of their claims.

Senior Iranian officials have made statements that have severely interfered with the procurement of lifesaving vaccines and sowed disinformation among Iranians. On January 8, 2021, Ayatollah Ali Khamenei, Iran’s supreme leader, said in a speech that “import of [the Covid-19] vaccines made in the US and UK are prohibited.” In a tweet that was hidden by Twitter due to its violation of the company’s “Covid-19 misleading information policy,” Khamenei claimed that vaccines made in the US or the UK are “completely untrustworthy. It’s not unlikely they would want to contaminate other nations.”

This policy has had serious consequences for Iranians’ right to health and ability to access lifesaving vaccines. On January 9, Dr. Mohammad Hassan Ghousian Moghadam, head of the Iranian Red Crescent Society, said plans to import 150,000 doses of the Pfizer vaccine donated by an US charity had been canceled.

Covid-19 vaccines are in short supply in Iran. According to the Health Ministry’s statistics as of August 18, only 5,063,519 people have received the required two doses of the Covid-19 vaccine out of a population of 85 million. Iran has only approved vaccines that require two doses for full vaccination.

Over the past year, Iranian authorities have prioritized and publicly promoted the production of a domestic vaccine – COVIran Barekat – in which it has reportedly invested substantial government resources. However, neither Iranian authorities nor the state-owned company producing the vaccine have released clear information regarding the vaccine’s safety and efficacy. Experts have raised concerns over this lack of transparency. And it appears that production is seriously behind schedule.

Faced with an escalating health crisis and widespread criticism of the way the authorities have handled it, the government may reverse the prohibition on US- and UK-produced vaccines. On August 10, President Ebrahim Raeesi, who originally supported Ayatollah Khamenei’s ban, ordered the government to immediately allocate resources to import vaccines. On the same day, Ayatollah Khamenei also said that vaccines should be acquired through “every possible way.” After several weeks of a rising death toll and hospitalizations, Iranian authorities announced a six-day general lockdown starting on August 15.

In response, Foreign Minister Javad Zarif claimed on his Instagram account that his ministry had secured the import of 24 million doses of vaccine and implied that other government agencies were to blame. “Which organization rejected a proposal for importing 20 million doses of vaccines?” he said, without providing any further details or evidence.

Iranian authorities should make use of every available resource to respond to the outbreak in a way that respects human rights and minimizes harm to the health and well-being of all those living in the country, Human Rights Watch said. This includes providing access to timely and accurate information about the pandemic, make personal protective equipment adequately available for frontline workers, providing access to affordable and safe testing, and providing social welfare support so that people can safely quarantine when necessary.

The Iranian government should publish all procurement contracts as well as an up-to-date vaccine supply and delivery index with price details, date of delivery, and number of doses, Human Rights Watch said.

Human Rights Watch has previously called on all stakeholders including the United States, which has imposed broad sectoral financial and economic sanctions on Iran, to ensure that people in Iran have swift, unencumbered, and equitable access to safe, effective, and affordable Covid-19 vaccines. On June 17, the US Department of the Treasury issued an additional general license for transactions and activities involving the delivery of face masks,ventilators, and oxygen tanks, vaccines and the production of vaccines, Covid-19 tests, air filtration systems, and Covid-19-related field hospitals.

Iran is a party to the International Covenant on Economic, Social, and Cultural Rights (ICESCR), which provides that everyone has the right to “the highest attainable standard of physical and mental health.” Under the treaty, the government is required to take steps “individually and through international assistance and cooperation, especially economic and technical, to the maximum of its available resources” to fulfill the right to health. It is specifically required to take effective steps for the “prevention, treatment and control of epidemic, endemic, occupational and other diseases.” The control of epidemics requires, among other steps, “the implementation or enhancement of immunization programmes and other strategies of infectious disease control.”

While financial sanctions inevitably diminish the capacity of the affected country to fund or support some of the necessary measures, Iran remains obligated to take steps “to the maximum of its available resources” to “provide the greatest possible protection” of the right to health of individuals within its jurisdiction.

To combat the global pandemic, Human Rights has previously called on countries funding Covid-19 vaccine research to ensure that recipients of these funds share all intellectual property data and other know-how to enable mass manufacturing of successful vaccine candidates.

Health officials and media outlets have reported that hospitals have reached their maximum capacity in cities, including Tehran, Ahvaz, and Mashhad, and are close to it in Isfahan, Ardebil, and Sistan and Baluchistan provinces. Doctors in Mashhad are reporting a particularly dire situation with a rapidly rising death toll and hospitalizations.

While Iranian authorities reported that as of August 16 at least 655 people were dying daily from Covid-19, this is likely a severe undercount. A deputy health minister, Iraj Harirchihad, previously said in a media interview that the authorities only record Covid-19 deaths when there is a positive polymerase chain reaction (PCR) test, and that the real number of deaths is most likely 1.5 to 2.2 times as high.

On August 4, Zali, the head of the Covid-19 pandemic government response in Tehran, acknowledged social media reports of shortages of oxygen and medical serum required to administer remdesivir, a medicine used for patients with Covid-19 in critical condition, in Tehran. The head of public relations at the association of pharmacists in Khorasan-e Razavi province also confirmed that serum and remdesivir are being rationed because of the short supply in the province.

Since then, the government’s vaccine rollout has been much slower than promised and its plans to secure needed doses, whether through imports or domestic production, lack transparency. An appendix to the national vaccine plan envisioned an average daily administration of 400,000 vaccines, or 10 million a month. Yet official data through late July shows that on most days the average number of vaccine doses administered was significantly lower.

The authorities have imported and accepted donated vaccines from multiple countries and procured doses through COVAX, the global vaccine procurement mechanism. But there has been little transparency around the total number of imported vaccines or plans for importing vaccines. On January 6, Iran’s Central Bank announced that it had paid for 16.8 million doses of vaccine through COVAX.

Vaccine supply shortages have severely hampered and delayed COVAX’s work globally. According to Iran’s Food and Drug Administration spokesperson, only 2.2 million COVAX doses have been delivered after delays. On August 5, Karim Hemati, head of Iran’s Red Crescent Society, told the Iranian Students News Agency (ISNA) that a total of 12,650,000 vaccine doses had been imported and delivered to Iran’s Health Ministry through the organization.

Although government-affiliated media reports claim that Phase 3 trials on the domestic vaccine would be publicly announced in August, the vaccine reportedly received emergency use approval from Iran’s Food and Drug Administration on June 14, and authorities began administering it in various sites across the country. Iran should immediately release the results from the Phase 3 trials and provide the information to an independent scientific agency to ensure that appropriate Phase 4 studies are in place to monitor potential adverse events, Human Rights Watch said.

It appears that the production of Iran’s domestically produced vaccines are falling seriously behind the promised schedule. The Headquarters for Executing the Order of Imam Khomeini, one of the most powerful state-owned enterprises, is the main investor in the COVIran Barekat vaccine. On July 3, the head of the Headquarter’s public relations said that the company is planning to produce 50 million vaccine doses by September, but they do no not appear to be on track to deliver anywhere close to this promised number of vaccines. On July 31, Hassan Jalili, the executive director of the Iranian pharmaceutical company producing the vaccine, said that about 5 million doses have been produced and are being tested for safety issues in the production process and 1.5 million doses have been delivered to the Health Ministry.