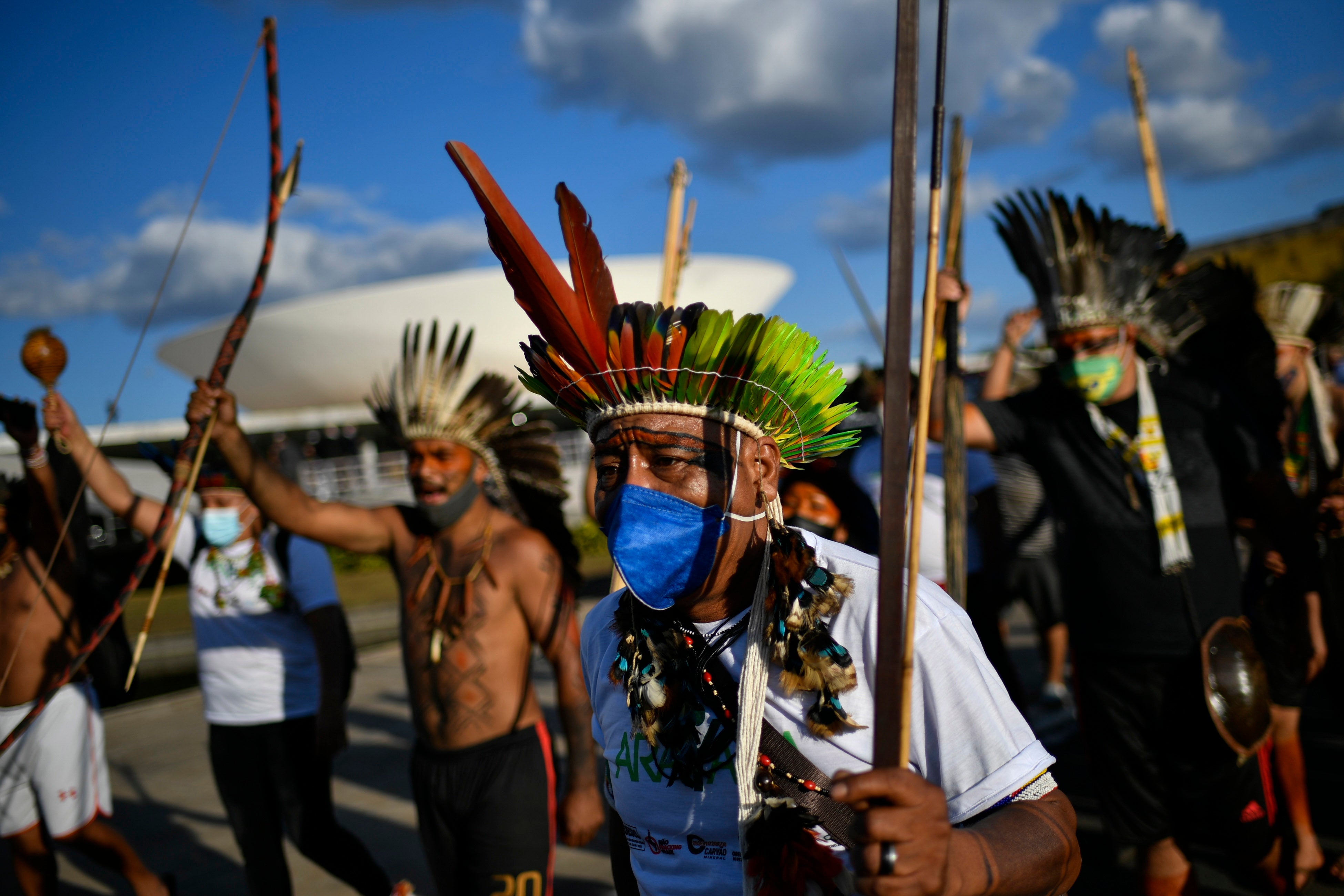 (São Paulo, August 24, 2021) – Brazil’s Congress should reject a bill that would prevent or hinder many Indigenous peoples from claiming their right to traditional lands, violating their rights under international law, Human Rights Watch said today.

Bill 490/2007, currently pending before the Chamber of Deputies, would prevent Indigenous peoples from obtaining legal recognition of their traditional lands if they were not physically present there on October 5, 1988 – the day Brazil’s Constitution was enacted – or if they had not initiated legal proceedings to claim it by that date. But the Constitution recognizes Indigenous people’s right to “the lands they traditionally occupy,” without any time limits or arbitrary cut-off date.

“Approval of this bill would be one of the most significant setbacks in the recognition of Indigenous peoples’ rights over their traditional lands and resources since the return to democracy in Brazil almost three decades ago,” said Anna Lívia Arida, Brazil associate director at Human Rights Watch. “It comes at a moment of extreme vulnerability for Indigenous people, who face not only invasion of their lands by miners and loggers, but also open hostility from the Bolsonaro administration.”

On August 25, 2021, the Supreme Court is scheduled to start ruling on the legality of the 1988 cut-off date, known in Brazil as the “time frame” argument, although justices can ask for a postponement. The court will rule on a case brought by Santa Catarina state, which is using the “time frame” argument to oppose recognition of traditional land claimed by the Xokleng Indigenous people. The court has established that its decision in this case will apply to all similar cases.

While the case was pending before the Supreme Court, the bill moved forward in Congress. A key congressional committee passed the latest draft of the bill in June. If approved by the full Chamber of Deputies, it would go to the Senate.

Brazil is in the process of examining 237 Indigenous lands for demarcation. Under Brazilian law, demarcation sets out clearly what land belongs to Indigenous peoples, and provides them with secure collective legal rights over that land. Many demarcation requests have been pending for decades. The bill expressly states that its provisions would apply to all those cases, which could delay them even more or impede demarcation altogether.

In 2017, the federal government under President Michel Temer adopted the 1988 cut-off date, and the administration of President Jair Bolsonaro has continued it. The Bolsonaro administration has effectively suspended the demarcation of 27 Indigenous territories based on this policy, according to the Indigenist Missionary Council (CIMI, in Portuguese), an Indigenous rights group.

If approved, the bill would turn that policy into law. It would make it impossible for Indigenous peoples who were expelled from their territory before the arbitrary cut-off date or who are otherwise unable to prove they were there or were involved in an ongoing dispute over their claim on that date to have their land rights recognized.

Brazilian environmental and Indigenous rights groups have told Human Rights Watch that large landowners could use the cut-off date to petition for judicial orders to expel communities from lands, alleging they did not prove they were there in 1988. Such petitions could affect lands in the process of demarcation or lands already demarcated.

The bill had been lingering in Congress since 2007 but gained new strength after President Bolsonaro took office. Bolsonaro, who has made offensive remarks about Indigenous people since he was a member of congress, vowed during the presidential campaign not to demarcate “one centimeter” of Indigenous land. Since he took office in January 2019, he has not approved any demarcations.

At the same time, President Bolsonaro has weakened federal agencies tasked with protecting forests in Indigenous lands. One of his legislative priorities is to open up Indigenous lands to mining and other commercial activities that could exacerbate the rampant destruction of the rainforest under his government.

Choosing an arbitrary cut-off date and refusing to recognize lands claimed after that date violate international standards, Human Rights Watch said. The United Nations Declaration on the Rights of Indigenous Peoples states that Indigenous peoples are entitled to the lands, territories, and resources that they have traditionally occupied or used. States are required to give legal recognition and protection to traditional lands, including those that Indigenous peoples were forced to leave or had otherwise lost.

Brazil voted in favor of this declaration at the UN in 2007 and described it as “a major achievement, long overdue, that will provide new impetus to and acknowledgement of the efforts of States and indigenous peoples to strengthen the promotion and protection of indigenous peoples’ rights.”

The Inter American Court of Human Rights has also recognized the right to restitution of land historically owned or occupied by Indigenous peoples, and found that possession is not a requirement, as their right remains as long as the material, cultural, or spiritual connection with the land persists.

Bill 490/2007 contains other very problematic provisions. It impedes Indigenous people from claiming additional land to expand already demarcated territories. It would also allow the government to eliminate Indigenous reserves – government land provided to Indigenous people to guarantee their livelihood and cultural survival – when it deems that land is no longer “essential” for those purposes due to changes in their “cultural traits” or other factors due to “passage of time.” These overbroad terms could lead to forced removals, Human Rights Watch said.

There are 60 Indigenous reserves in Brazil, which are home to almost 70,000 people, according to the Instituto Socioambiental (ISA), a nonprofit organization.

The bill would also allow the government to contact Indigenous peoples living in voluntary isolation to give medical assistance and to “mediate action in the public interest,” without providing any other details. United Nations-supported interpretations of international standards warn that contact with isolated peoples can have dramatic negative consequences for their physical and cultural survival and that governments should take measures to prevent outside contact.

The bill would also allow the government to explore energy resources, set up military bases, and expand strategic roads in Indigenous lands without any consultation with Indigenous peoples. International standards require effective consultation with Indigenous peoples in good faith to obtain their free and informed consent before approving projects that would impact their lands and livelihoods, including for military activities, as well as before approving laws to that effect. Congress is also examining a possible withdrawal from International Labour Organization Convention 169, which recognizes the right of Indigenous people to be consulted about projects in their lands, among other provisions.

The demarcation and protection of Indigenous territories is not only a fundamental step to uphold Indigenous rights but also a cornerstone of successful conservation efforts in Brazil. Studies show that that demarcation and other measures to secure Indigenous lands can slow deforestation, which is key to enable Brazil to meet its commitments under the Paris Agreement to reduce greenhouse gas emissions. Under Bolsonaro, deforestation in the Amazon hit its highest rate in 12 years, about 11,000 square kilometers of the rainforest were destroyed from August 2019 through July 2020.