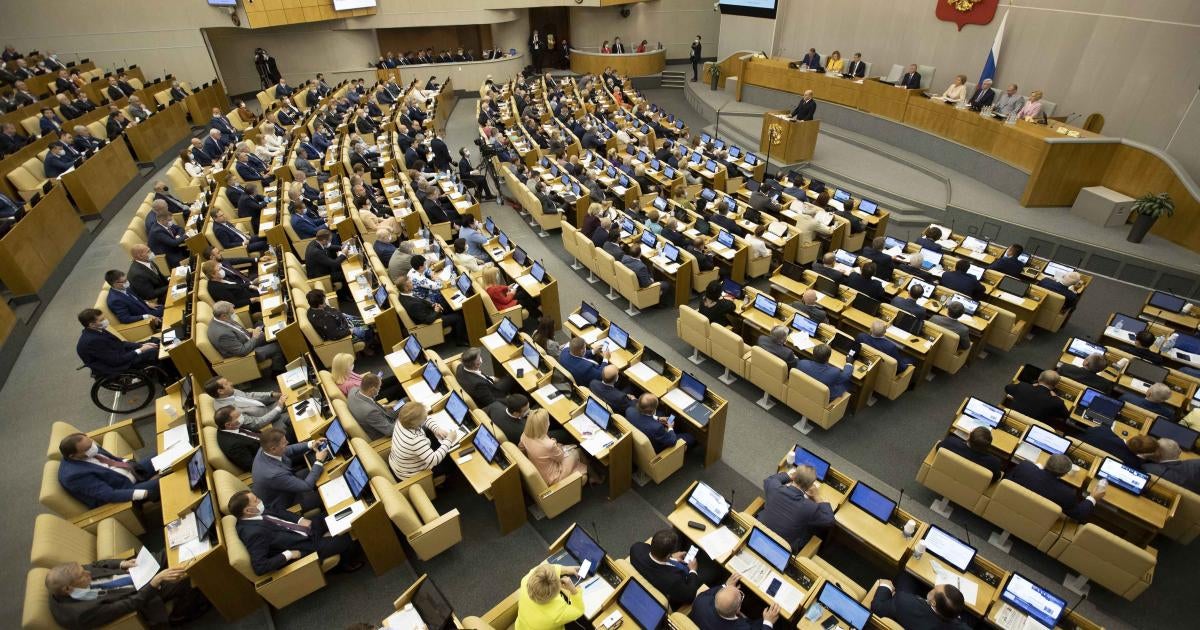 (Berlin) – Russia has enacted two laws, adopted and brought into force on March 4, that criminalize independent war reporting and protesting the war, with penalties of up to 15 years in prison, Human Rights Watch said today. The laws make it illegal to spread “fake news” about the Russian armed forces, to call for an end to their deployment and to support sanctions against Russian targets.

“These new laws are part of Russia’s ruthless effort to suppress all dissent and make sure the population does not have access to any information that contradicts the Kremlin’s narrative about the invasion of Ukraine,” said Hugh Williamson, Europe and Central Asia director at Human Rights Watch.

The two laws were fast-tracked through parliament on March 4, with both chambers adopting them unanimously. President Putin signed them and brought them into effect the same day.

The laws impose strict censorship on all discussion of Russia’s war with Ukraine, with Russian authorities banning the description of it as “war” or “an invasion.” But the laws are not limited to the current war in Ukraine but apply to any deployment involving Russian armed forces, such as those under the regional military alliance, the Collective Security Treaty Organization.

There is also a threat that the law could be applied retroactively. Russian authorities have routinely charged people with extremism or involvement with “undesirable organizations” based on social media posts that date from years prior to those groups were banned. For example, in September 2021, a court fined Igor Kalyapin, chairperson of the Russian Committee Against Torture, with “distributing materials” of an “undesirable” foreign organization.

The material in question was an article posted on The Committee against Torture’s website reporting that a Czech humanitarian group had honored Kalyapin for his human rights work. The Czech organization, People in Need, was subsequently blacklisted as “undesirable” in 2019, two years after Kalyapin’s organization posted the article. The law was applied nonetheless, with Russian law enforcement and the courts interpreting the posts as a “continuous violation.”

If the authorities apply the same approach to the new laws, Russian opposition politicians, activists, and journalists who have already publicly called to end the war, protested, publicized alleged violations by Russian armed forces, or called for sanctions on Russian targets, could be at risk of prosecution. Those outside Russia could also be subject to potential extradition attempts.

Human Rights Watch called on all governments to refuse any future extradition request for Russian nationals for offenses under these laws, as it would lead to violations of the extradited person’s fundamental rights and violate the state’s international legal obligations.

On March 5, police raided the premises of an opposition newspaper, Pskovskaya Guberniya, and a local branch of “Yabloko” opposition party in Pskov, western Russia, alleging they were responsible for “discreditation of Russian Armed Forces.” The police apparently opened proceedings in response to a local resident who alleged that on February 28 she received an email with calls to take part in anti-war protests. Sources who had seen the email, suggest that there is no evidence that the email was sent from the newspaper or the opposition party.

However, Lev Shlosberg, who is both the publisher of the newspaper (and previously its chief editor) and the chairman of the local “Yabloko” party branch has been vocal on his anti-war stance with respect to the invasion of Ukraine, and is one of the organizers of the anti-war protest planned in the city next week. It is therefore likely that the police used the February 28 email as an excuse to target Schlosberg and entities linked to him.

In anticipation of the adoption of the draconian laws, a number of foreign media pulled out from Russia while at least two Russian independent media decided to delete all their previous war related publications. This raises the prospect that millions in Russia will also feel compelled to remove and delete existing publications and material, distorting the historical record.

As a party to the International Covenant on Civil and Political Rights and the European Convention on Human Rights, Russia has obligations to respect and protect the rights to freedom of opinion and expression, which include the rights “to seek, receive and impart information and ideas through any media and regardless of frontiers.” While necessary and proportionate restrictions on these rights may be imposed for legitimate reasons, including national security, territorial integrity, or public safety, the scope of Russian censorship does not meet the criteria for lawful interference with these rights, Human Rights Watch said.

Freedom of speech and access to information may also be subject to further restrictions in times of emergency including wartime. However Russian authorities are not using wartime powers nor are they seeking to derogate from – temporarily and partially suspend – its human rights obligations, due to a state of emergency. The level of control and censorship the Kremlin has imposed, infringes on both the freedom of expression and the right of access to information and cannot be justified under international law even in times of war, Human Rights Watch said.

“The Kremlin is wiping out all options for dissent to ensure that brave anti-war protesters do not return to the streets,” Williamson said. “When President Putin goes after such a fundamental right – the cornerstone of democracy – with such totalitarian tactics, he is dispensing with any pretense that his government has any respect for rule of law, human rights, or democracy.”

“False Information” about Russian Armed Forces
The newly added article 207.3 of the Criminal Code penalizes “public dissemination of deliberate false information about the use of Russian Armed Forces,” with penalties ranging from large fines to imprisonment of up to three years. Those who allegedly disseminate such false information using their “official position” or as part of an organized group or accompanied by “artificial creation of evidence for prosecution;” or “guided by greed, or motivated by political, ideological, race, ethnic or religious hatred or hatred against a social group” could face five to ten years in prison. In the event of “grave consequences” the penalty is imprisonment from 10 to 15 years with a ban on carrying out a profession or certain activities for up to 5 years. Russian criminal law does not contain an exhaustive list of what constitutes “grave consequences” and depending on the specific crime, law enforcement and courts have interpreted it to include significant financial loss and bodily harm or death. What might constitute a grave consequence of disseminating alleged false information, is therefore essentially at the discretion of the prosecution.

In the days following Russia’s full-scale invasion of Ukraine on February 24, Russian authorities doubled down on suppressing critical voices and independent media, threatening to block access to several media outlets or fine them, unless they limited their reporting to reproducing the official Kremlin narrative. Several prominent media organizations were subsequently shut down or chose to suspend their broadcasting.

The latest provisions create a risk of criminal prosecution leading to imprisonment not only for professional journalists, but for anyone posting messages on the internet or potentially anyone discussing the war in public. Offences committed with “aggravating circumstances” may be subject to harsher sentences, with the “artificial creation of evidence for prosecution” explicitly included as one such aggravating circumstance. Therefore activities which are seen to contribute to the recently announced International Criminal Court investigation into potential war crimes in Ukraine could lead to prosecution and jail, and investigative groups gathering and publicizing data and imagery on violations of international humanitarian and human rights law could be at risk.

Public Actions “Discrediting” Russian Armed Forces
The laws introduce new provisions to the Russian Criminal Code (article 280.3) and to the Code of Administrative Offences (article 20.3.3), making “public actions aimed at discrediting” Russian Armed Forces illegal. This includes public calls for the armed forces to be withdrawn or to stop fighting.

If an accused has at least one prior administrative conviction for the same charge within one year, they can be indicted under the Criminal Code and face up to three years in prison.

Since Russia began the war with Ukraine, thousands have gathered in the streets across Russia to peacefully protest and call on Russian authorities to end the war. Authorities responded with mass detentions, intimidation, and police brutality. Despite this, daily protests have persisted, with protesters holding anti-war placards and chanting anti-war slogans. On March 4, opposition activist Yulia Galiamina was detained on allegations of calling for participation in protests. Other opposition figures, human rights activists, and others have also openly called for people to join protests, while many prominent TV personalities, musicians, writers, and poets in both countries and beyond have been publicly calling for an end to the war and expressing dismay at Russia’s actions.

It is yet unclear whether general anti-war slogans will fall foul of the law for constituting acts of “discreditation,” but it is very possible they will. The timing and the speed with which the laws were adopted send an ominous message about how broad a reach the laws are intended to have.

As the law requires a person have at least one prior administrative conviction within a year for the same offence, before facing criminal sanctions, criminal prosecutions against war protestors may not commence immediately. But with anti-war protests happening daily, there is real prospect of those who take part in more than one protest being prosecuted very soon for administrative and subsequently criminal offenses. Authorities are also likely to use, as they have in the past, old social media posts as the basis to initiate prosecutions for administrative offences, opening the door for criminal prosecutions against anyone who persists with public opposition to Russia’s actions in Ukraine. Likewise, as Russian courts have already been prosecuting peaceful protestors and jailed one of them on the basis that in January 2021 they interfered with traffic, anti-war protestors are likely to see any slight interruption they cause to traffic being categorized as an aggravating circumstance and end up in jail.

The new provision in the Code of Administrative Offences (article 20.3.4) covers calls on foreign states, their entities, or intergovernmental organizations or unions, to introduce or implement political or economic sanctions. The penalty is identical to that for “discreditation” of Armed Forces, up to 50,000 rubles (approx. US$ 450) for individuals and 500,000 rubles (approx. $4,500) for legal entities.

The corresponding criminal offence (article 284.2) targets “repeat offenders,” that is Russian nationals who within a year prior were sentenced on the same charges for an administrative offence. The penalties range from a fine, to up to three years in prison and a fine.

Various countries, including the US and the European Union have imposed extensive economic and political sanctions against the Russian leadership, business people with close ties to the Kremlin, and Russia’s banking and aviation sectors. Some international bodies and intergovernmental organizations have also acted to suspend Russian membership or expel Russia altogether.

A number of Russian opposition figures, including imprisoned opposition leader Alexey Navalny and his aides, have long been calling for sanctions against Russian targets including business people that they believe to be close to President Putin. These new offences provide an additional tool to persecute Navalny, his aides, and other opposition politicians and activists who support sanctions against Russian targets, and to seek the extradition back to Russia of opponents who have fled the country. Such extraditions would lead to violations of the extradited person’s fundamental rights, and so governments should refuse any such extradition requests received as a violation of its international legal obligations.