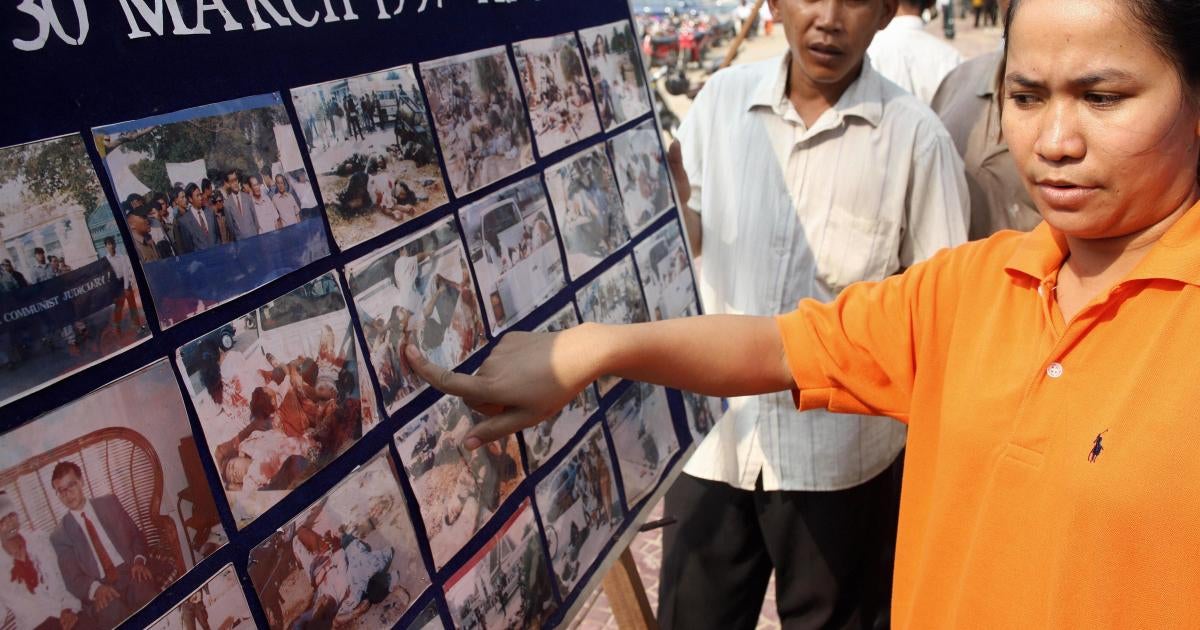 (Paris) – A French court has issued arrest warrants for two senior Cambodian generals for the grenade attack on an opposition political rally in Phnom Penh on March 30, 1997, that killed 16 people and injured more than 150, Human Rights Watch said today. The court order states that a summons was issued for Prime Minister Hun Sen for his role in the attack, but that the French government blocked its delivery, citing head of state immunity.

The order was issued on December 30, 2021, by Judge Sabine Khéris, vice president of investigations of the Tribunal Judiciaire de Paris (Judicial Court of Paris). It stated that arrest warrants had been issued on March 19, 2020, against Gen. Huy Piseth, then-chief of Prime Minister Hun Sen’s bodyguard unit, and Gen. Hing Bun Heang, then-deputy-chief of the unit, for their role in planning and orchestrating the attack.

“The Cambodian government has never taken action against those responsible for the 1997 grenade attack on the opposition leader Sam Rainsy and his supporters because there is substantial evidence that Prime Minister Hun Sen and his generals were behind this mass atrocity,” said Brad Adams, Asia director at Human Rights Watch. “The French government should request a European Arrest Warrant and an Interpol Red Notice to take Gen. Huy Piseth and Gen. Hing Bun Heang into custody and produce them before the court for trial in Paris.”

The order was issued in a case filed in Paris by Sam Rainsy, the leader of the opposition and target of the attack, who was injured by a grenade fragment. His bodyguard died after taking the full force of one of the grenades as he shielded Rainsy.

It appears from the judicial information that Messrs. Piseth HUY and Bun Heang HING, chief and deputy chief of the prime minister’s special bodyguards, organized and carried out the grenade attack on March 30, 1997, in Phnom Penh (CAMBODIA), having Mr. SAM Rainsy as the target. Piseth HUY deployed his men, heavily armed and in combat gear. Instructions were given to the men to position themselves in a line at a reasonable distance behind the demonstrators so as to facilitate the retreat of the grenade throwers to the CPP military compound and to prevent anyone from pursuing them. Bun Heang HING recruited men to carry out the attack…. Sen HUN's bodyguards, 2nd battalion, 17th regiment, is commanded solely by Sen HUN, the prime minister himself, or by Piseth HUY. Piseth HUY told the FBI that he received the deployment order from the Prime Minister's Office. He has made several statements to that effect.

Instead of ensuring an independent and thorough investigation into the attack, Hun Sen immediately called for the arrest of Rainsy and other demonstration organizers, and prevented them from leaving the country, Human Rights Watch said. The court noted “the lack of cooperation of the Cambodian authorities throughout this judicial investigation. This is despite the fact that Cambodia has cooperated with the French justice system in a murder case involving a French family in Cambodia.”

The order states that, on February 10, 2017, Judge Khéris issued a summons to Hun Sen to appear in court. But on August 8, 2017, “the [French] Ministry for Europe and Foreign Affairs informed her that Sen HUN, in his capacity as head of the government of the Kingdom of Cambodia, held absolute immunity from jurisdiction, which prevented him from being tried in France and from being subjected to any measure of constraint, such as a summons to appear for possible indictment, being taken by a French authority.”

“Without immunity, Hun Sen might also be facing indictment in France for his role in this horrific attack on peaceful protesters,” Adams said.

On March 30, 1997, about 200 supporters of the opposition Khmer Nation Party (KNP), led by Rainsy, a former finance minister, gathered on a Sunday morning in a park across from the National Assembly in Phnom Penh to denounce the judiciary’s lack of independence and judicial corruption. In a well-coordinated attack, unidentified assailants threw four grenades into the crowd in an evident attempt to kill Rainsy, killing protesters and bystanders, including children, and blowing limbs off nearby street vendors.

Prime Minister Hun Sen’s personal bodyguard unit, in full riot gear, was present for the first time at a demonstration. Numerous witnesses reported that the people who threw the grenades subsequently ran toward Hun Sen’s bodyguards, who were deployed in a line at the west end of the park in front of a closed and guarded residential compound containing the homes of many senior leaders of the ruling Cambodian People’s Party (CPP). Witnesses told United Nations and FBI investigators that the bodyguards allowed the assailants to escape into the compound. The bodyguards then stopped at gunpoint crowd members who were in pursuit, threatening to shoot them.

The police, who had previously maintained a high-profile presence at opposition demonstrations, had an unusually low profile on March 30. A large contingent was around the corner, instead of inside the park. Other police units were in a nearby police station in full riot gear on high alert, suggesting they knew that there would be violence.

The demonstration was the first time the opposition had received official permission from both the Interior Ministry and the Phnom Penh municipality for a rally after repeated refusals. The change in the government’s position fueled speculation that the demonstration was authorized so it could be attacked, Human Rights Watch said.

In a June 1997 interview with the Phnom Penh Post, Hing Bun Heang threatened to kill journalists who alleged that Hun Sen’s bodyguards were involved.

Hun Sen’s bodyguard unit remains notorious in Cambodia for violence, corruption, and its impunity as the prime minister’s de facto private army. Since the attack, Hun Sen has repeatedly promoted Hing Bun Heang. He is now a lieutenant general and deputy commander-in-chief of the Royal Cambodian Armed Forces. Huy Piseth, who admitted to the FBI that he ordered Brigade 70 forces to the scene that day, went on to become undersecretary of state in the Defense Ministry.

“Handing out promotions to people implicated in massacring peaceful demonstrators shows cruel disregard for the victims,” Adams said. “The message sent is that human rights abusers, no matter how egregious their acts, will not only go free, but will be rewarded.”

The FBI investigated the attack under a US law providing the FBI jurisdiction whenever a US citizen is injured by terrorism. Ron Abney, a US citizen, was seriously injured in the attack. The FBI’s lead investigator, Thomas Nicoletti, interviewed Cambodian soldiers and officers up the chain of command and concluded that only Hun Sen could have ordered the bodyguard unit to be at the park. Nicoletti has said that, if he had more time, he believed he could have gathered enough evidence to present a case to prosecutors to file criminal charges. Yet, in May 1997, US ambassador Kenneth Quinn ordered him out of the country.

An article in the Washington Post in June 1997 said:

In a classified report that could pose some awkward problems for US policymakers, the FBI tentatively has pinned responsibility for the blasts, and the subsequent interference, on personal bodyguard forces employed by Hun Sen, one of Cambodia’s two prime ministers, according to four US government sources familiar with its contents.... the agents involved reportedly have complained that additional informants here are too frightened to come forward.

The US State Department officially classified the bombing as a terrorist attack. On January 9, 2000, George Tenet, then-director of Central Intelligence, said the United States would never forget an act of terrorism against its citizens and would bring those responsible to justice “no matter how long it takes.” FBI evidence on Hun Sen’s role in the attack remains in its files, but the FBI has refused to fully cooperate with congressional inquiries.

“The FBI was close to solving the case when its lead investigator was suddenly ordered out of the country,” Adams said. “The FBI should now finish what it started.”

The 1997 attack took place at a time of extreme political tension in the country. The coalition government between the royalist FUNCINPEC and Hun Sen’s CPP was unravelling. Rainsy’s KNP was seen as a threat in national elections scheduled for the following year. For more than a year, CPP officials and agents had threatened and attacked him and his party members. A bloody coup by Hun Sen’s forces followed in July 1997, killing more than 100 people and sending politicians and activists into exile in fear for their lives. Despite meticulous documentation by the United Nations of a campaign of extrajudicial killings, no one has ever been held accountable for abuses related to the coup.

“The brazen 1997 attack in broad daylight ingrained impunity in Cambodia more than any other single act in the country’s post-Khmer Rouge history,” Adams said. “Within months, Hun Sen staged a coup that cemented his long-time hold on power, leading to the dictatorship that exists in Cambodia today.”