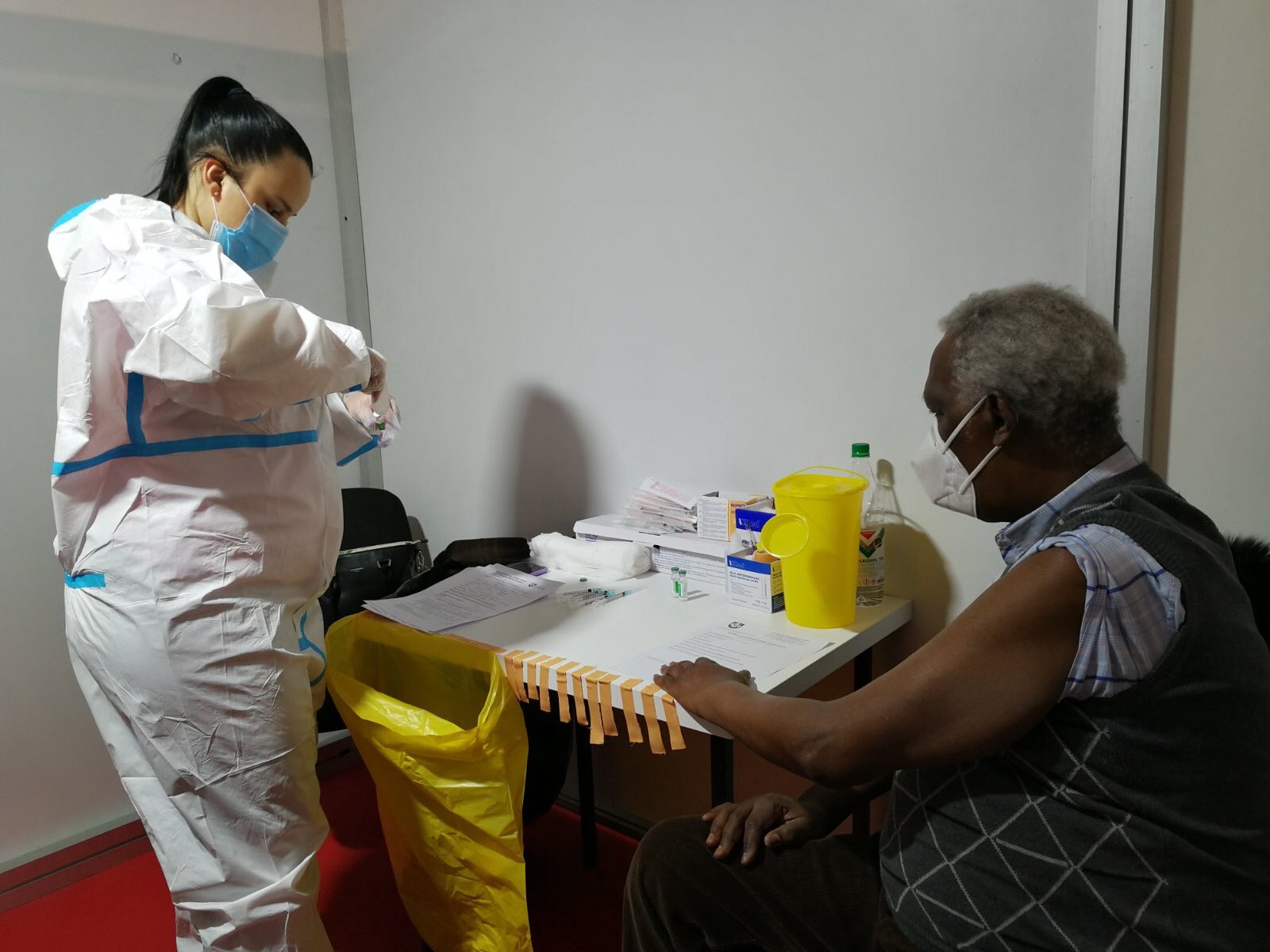 In Serbia, Asylum Protection Centerlaunched a national campaign in 2021 to ensure refugees and asylum seekers could get COVID-19 vaccines. The organization is also working to protect migrant children and help them enroll in schools.

When COVID-19 vaccines first became widely available in Serbia in early 2021, they were only offered to Serbian citizens. Refugees staying in camps, where the living conditions increased the risk of getting infected with the virus, did not have access to this lifesaving protection.

“We initially reacted in the media to inform the public about the needs of refugees who were neglected in all this chaos,” explained Rados Djurovic, APC’s Executive Director. In media interviews, the APC team stressed that refugees living in camps were vulnerable to COVID-19 and argued that they should be prioritized for vaccination.

APC lawyers also analyzed the government website to register for vaccine appointments and determined that nothing on the site legally prevented asylum seekers and refugees from signing up. APC began to help asylum seekers and refugees living in private accommodation living outside the camps to register for appointments and accompanied their benefitiarieswhile also explaining to hospitals why they should inoculate this population. The organization then publicized these efforts on social media. With support of APC, first refugees started to receive vaccines setting the steps for others to follow.

In the face of mounting public pressure, the Serbian government made vaccines collectively available to refugees in camps in March, just a few months after they had first been offered to Serbian citizens. Once the vaccines were approved for younger age groups, refugee families were also able to vaccinate their children.

Despite the pandemic, tens of thousands of refugees entered Serbia in 2021, fleeing conflicts and a lack of economic opportunities in Afghanistan, Syria, and other countries. Many traveled north through Serbia in an effort to reach neighboring Croatia, Hungary and Romania which are part of the European Union. A smaller number have stayed in Serbia to build a new life.

COVID-19 is far from the only danger refugees face on their journey. Children, particularly unaccompanied minors, often experience violence and exploitation. They risk falling into the hands of smugglers and traffickers and sometimes experience mistreatment in refugee camps.

Of the more than 60,000 migrants and refugees who entered Serbia last year, according to APC figures, at least 6,000 were children and youth below the age of 18. Since the beginning of its work, APC supports both the children passing through the country and those staying to apply for asylum. For all these years In addition to providing young people with psychosocial support and legal aid, APC hosts social inclusion events – including soccer matches, cooking, photography, etc – to make the first contacts between local and refugee population and help refugees feel more integrated in Serbian society. The organization have been organizing workshops for kids on a range of topics including the Serbian language and preparing for school.

For the children who stay in Serbia, one of the biggest challenges is access to education. In an effort to keep refugee families from remaining in the country, Rados said, the Serbian government tries to prevent their children from enrolling in school hoping they would eventualy leave for EU. In addition, local schools sometimes don’t know how to enroll refugee children and don’t have interpreters. APC provides families with legal assistance and information to navigate these challenges and offers support to teachers so they can better help refugee students.

“We try to fill in those gaps and to be someone who is collaborating and facilitating that communication with parents, while supporting children their integration into educational system and local schools” explained Jovana Vincic, an APC Program Manager.

APC was founded in 2007 by young local lawyers, psychologists, and social workers who had experience working with refugees abroad, in other countries. At the time, the asylum system in Serbia did not yet exist. Serbia implemented an asylum law in 2008, and during this period the first refugees began arriving in the country. Many of them received help from APC, which grew quickly to meet increasing demand for its services.

In addition to offices in Belgrade, Presevo, and Subotica, APC has mobile teams that deploy across the country and a network of more than 150 volunteers.

“We can move fast when there is a need,” Rados said. “We are ready to reach people where they are and respond almost immediately.”

Today, Rados and Jovana said, refugees in Serbia face more challenges than ever before, and APC’s work has become increasingly difficult in the face of anti-immigration policies. But the APC team still finds lots of reasons to hope.

“Every time when a kid learns Serbian, when they share that they have Serbian friends, that they are invited to some gatherings, that they started their new life here, it’s something that’s confirming that this is really great work,” Jovana said.